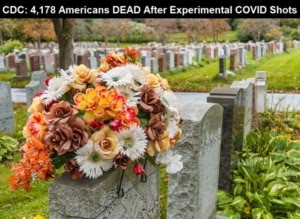 by Brian Shilhavy
Editor, Health Impact News
The CDC has just released the newest total of deaths reported following the experimental COVID shots since they were granted emergency use authorization (EUA) in early December through May 3, 2021, and that total now stands at 4,178 deaths reported to VAERS. (Source.)
The number of deaths recorded following the experimental COVID injections now equals the total number of recorded deaths following vaccines for the past 20 years. 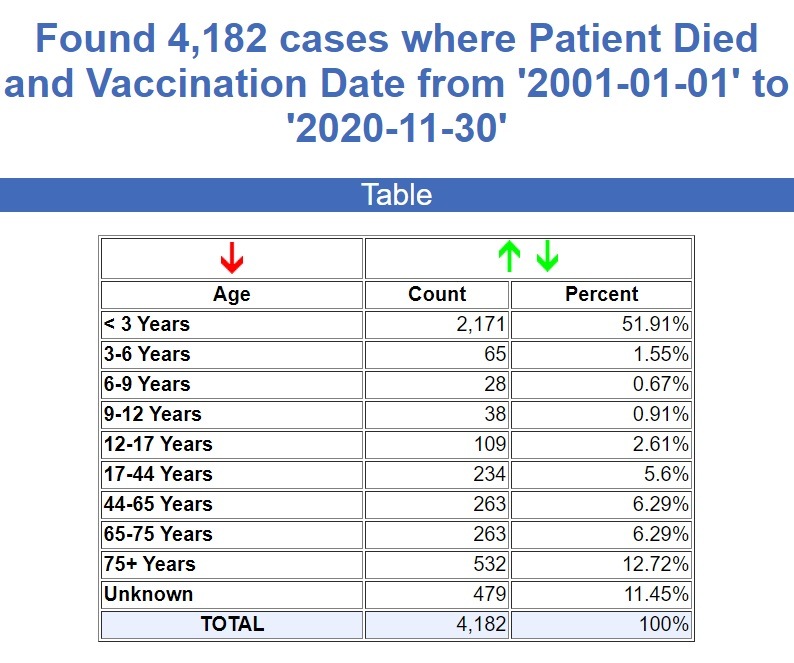 Source.
We have previously covered the work of Dr. Peter McCullough, a consultant cardiologist and Vice Chief of Medicine at Baylor University Medical Center in Dallas, TX. He is a Principal Faculty in internal medicine for the Texas A & M University Health Sciences Center.
Dr. McCullough is an internationally recognized authority on the role of chronic kidney disease as a cardiovascular risk state with over 1000 publications and over 500 citations in the National Library of Medicine.
He is the most published scientist in the history of his field.
He was recently interviewed by Alex Newman of The New American.
During this interview he stated:

A typical new drug at about five deaths, unexplained deaths, we get a black-box warning, your listeners would see it on TV, saying it may cause death. And then at about 50 deaths it’s pulled off the market.

Dr. McCullough compared what is happening today with the experimental COVID shots, which now have 4,178 recorded deaths, according to the CDC themselves, with the last time a vaccine was given an EUA in 1976 during the “Swine Flu Pandemic.”
In 1976 they attempted to vaccinate 55 million Americans with the experimental shot, and it had a recorded 500 cases of paralysis and 25 deaths, and so it was pulled from the market.
What we are seeing today with so many recorded deaths after the use of experimental pharmaceutical products is unprecedented, according to Dr. McCullough.
Watch the entire interview here.

The U.S. Government is Deliberately Allowing Big Pharma to Kill American Citizens – Children are Next

The official response to all these recorded deaths in VAERS by the CDC remains:

A review of available clinical information, including death certificates, autopsy, and medical records has not established a causal link to COVID-19 vaccines.

The only thing that changed this week, after the FDA gave the go ahead to resume using the Johnson and Johnson COVID shots that cause fatal blood clots, is that they added this disclaimer:

However, recent reports indicate a plausible causal relationship between the J&J/Janssen COVID-19 Vaccine and a rare and serious adverse event—blood clots with low platelets—which has caused deaths.

So they admit there is a causal relationship of the shots causing death, but they put it back on the market anyway, claiming that these adverse events are “rare.”
The next target for these killer injections are children, as Pfizer has applied for emergency use authorization with both the FDA in the U.S., and the EMA in Europe, to inject 12 to 15 year olds with their experimental COVID mRNA shots. (Source.)
FiercePharma has reported that Canada has just approved the Pfizer shot for 12 to 15 year olds. It was announced on Pfizer’s website today.
And the majority of the world’s population seems to be oblivious to the fact that genocide is happening right in front of our eyes, and prefer instead to believe the government “health authorities” who are lying and telling everyone this really isn’t happening.
Comment on this article at HealthImpactNews.com.

by Brian Shilhavy
Health Impact News
There are so many tragic stories now of loved ones dying after taking an experimental COVID injection, that one has to wonder if people are now starting to become desensitized by all these stories as the public is perhaps being conditioned to accept “death by lethal injection” as part of the “new normal?”
A 50-year-old woman in Canada, a 61-year-old woman in Orange, California, and a 58-year-old man in Minnesota are three more casualties following COVID-19 injections. 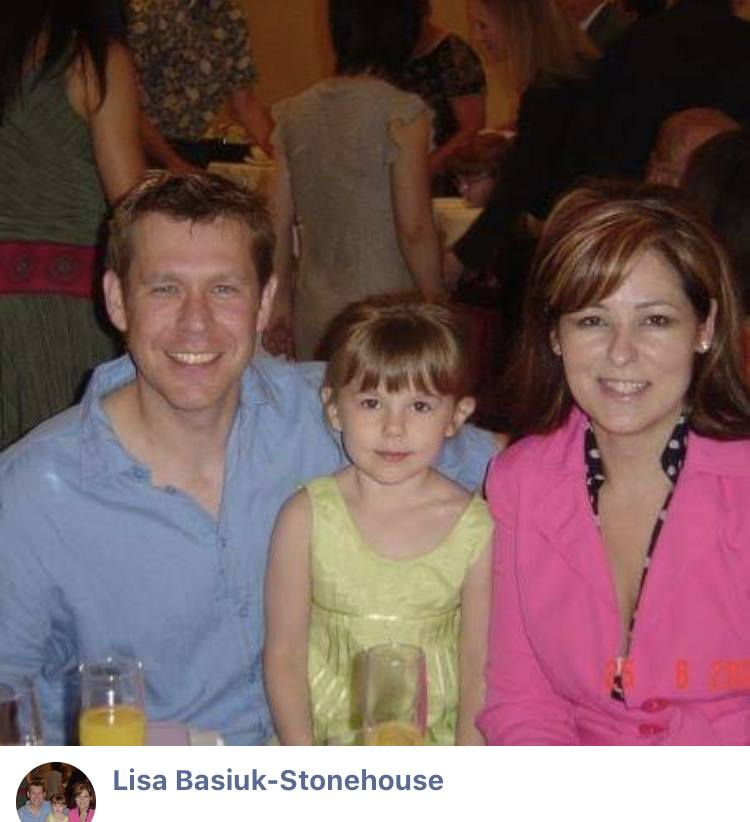 by The Empowerer
Lisa Basiuk-Stonehouse passed away May 3, 2021 after her AstraZeneca vaccine. According to her Aunt Shari, blood clots caused a stroke and the matter is still being investigated.
Lisa’s husband Morrie passed away two years ago, according to the Facebook post by Lisa’s Aunt Shari Turner. Lisa and Morrie’s daughter Jordan, is now 19 years old. 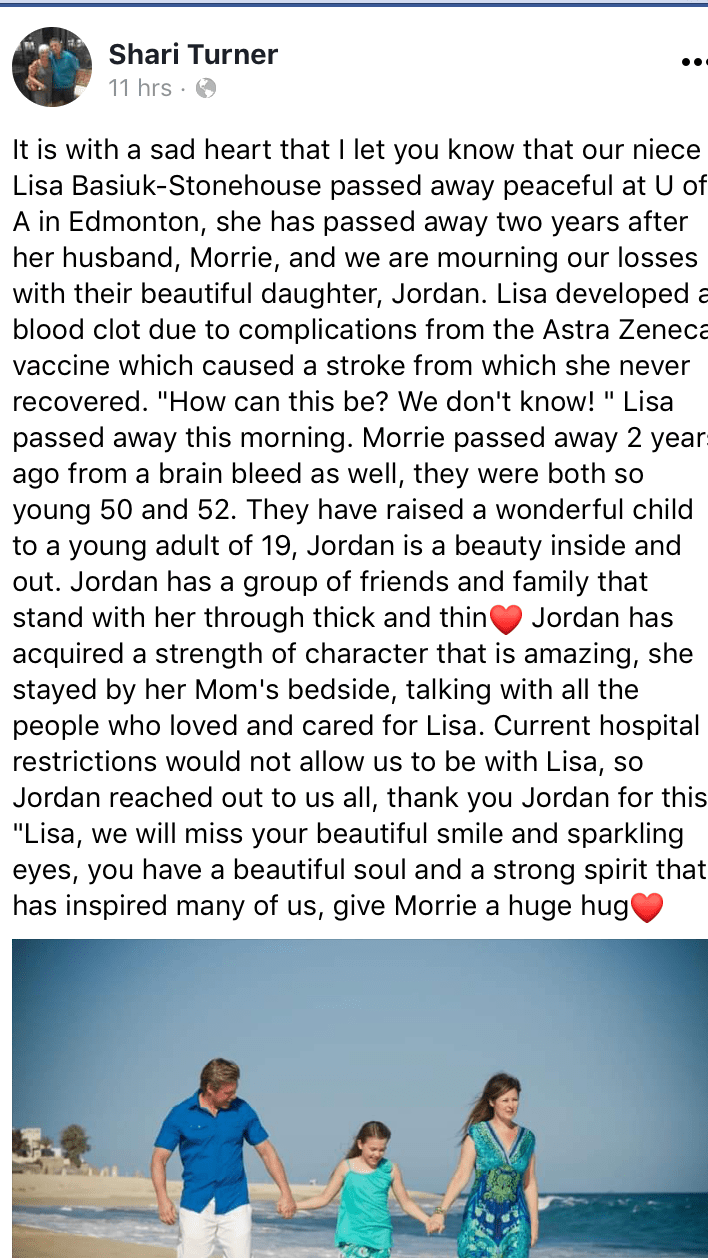 A gofundme account has been created, and as of May 3, 2021 the fundraiser had generated 19k of the 25k goal. It appears Lisa and her family are very loved. 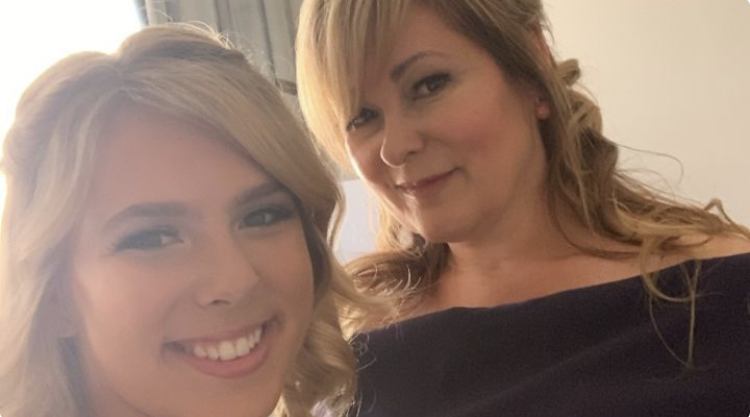 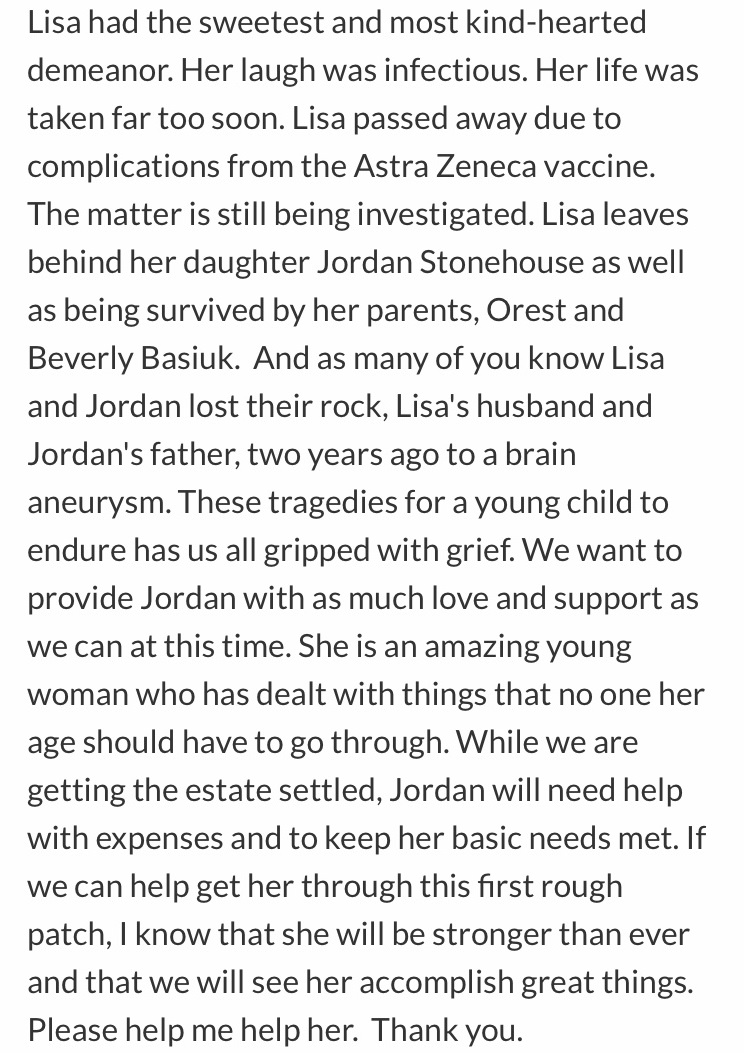 Read the full article at The Empowerer. 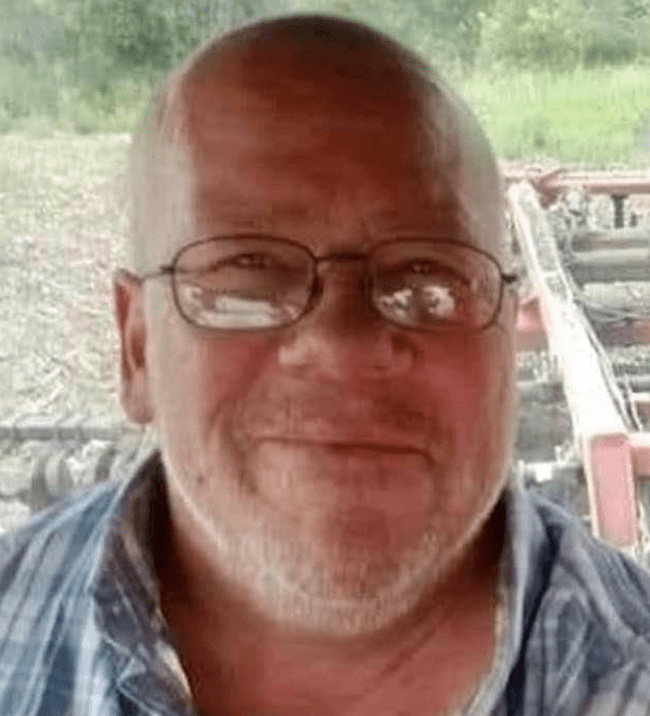 by The COVID Blog
HIBBING, MINNESOTA — A 57-year-old trucker and avid fisherman is dead in one of the more heartbreaking stories we’ve covered on this blog.
Mr. John Medved received the experimental Johnson & Johnson viral vector shot on April 1, according to his daughter, Mrs. Rachel Weise.
Twelve days later, Mr. Medved was in the emergency room due to extreme shortness of breath. Doctors diagnosed him with a pulmonary embolism, aka blood clots in his lungs.
He was placed on a ventilator and in a medically-induced coma the next day as his condition rapidly deteriorated.
Doctors then discovered that Mr. Medved had a stroke that damaged the entire left side of his brain.
The doctor told Rachel that it was the worst stroke he’d seen in his career. The family conceded that their beloved father, brother and friend was brain dead. He was taken off life support and passed away on April 22. 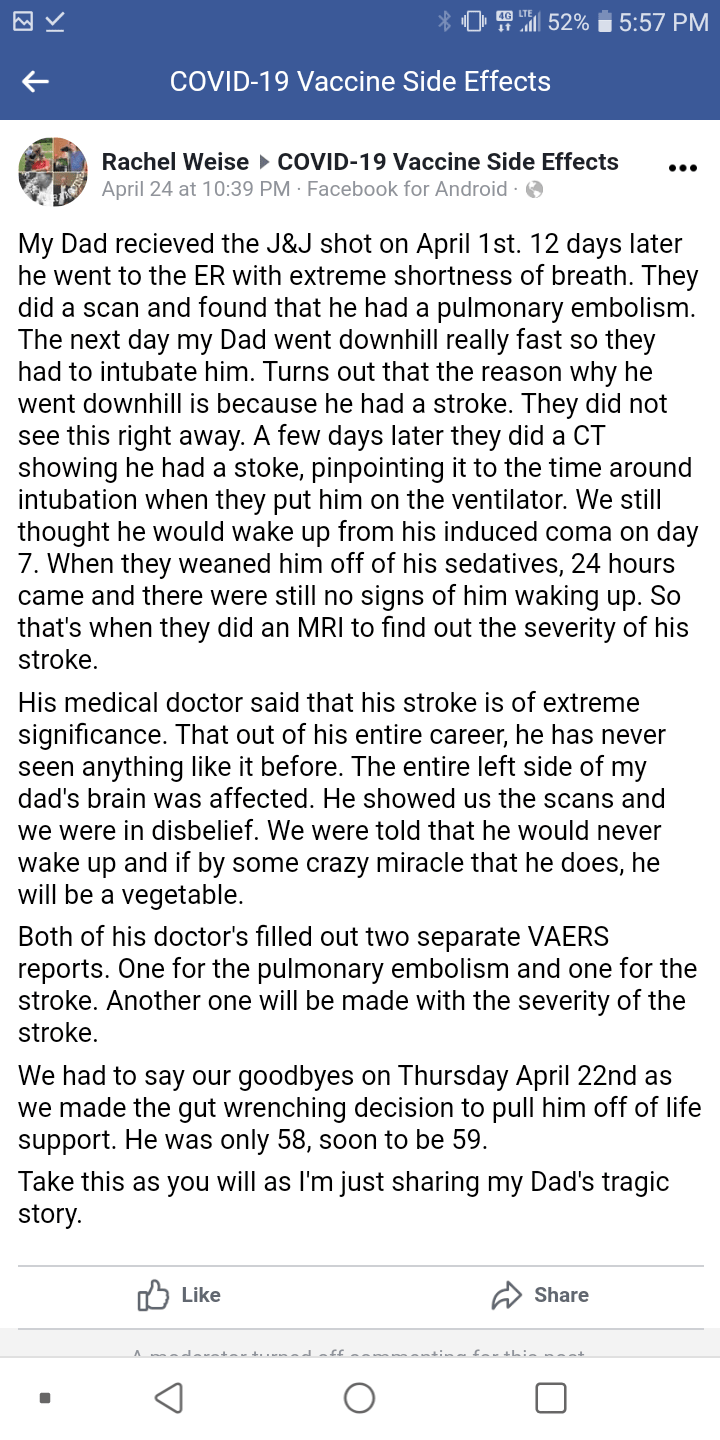 Mrs. Weise is, understandably, having a very difficult time dealing with her father’s death. She tried to convince him not to get the shot, to no avail.
But at least Mrs. Weise is not going to let her father die in vain. She is warning everyone she knows about the dangers of these experimental shots and citing the laws that provide immunity to mRNA and viral vector manufacturers. 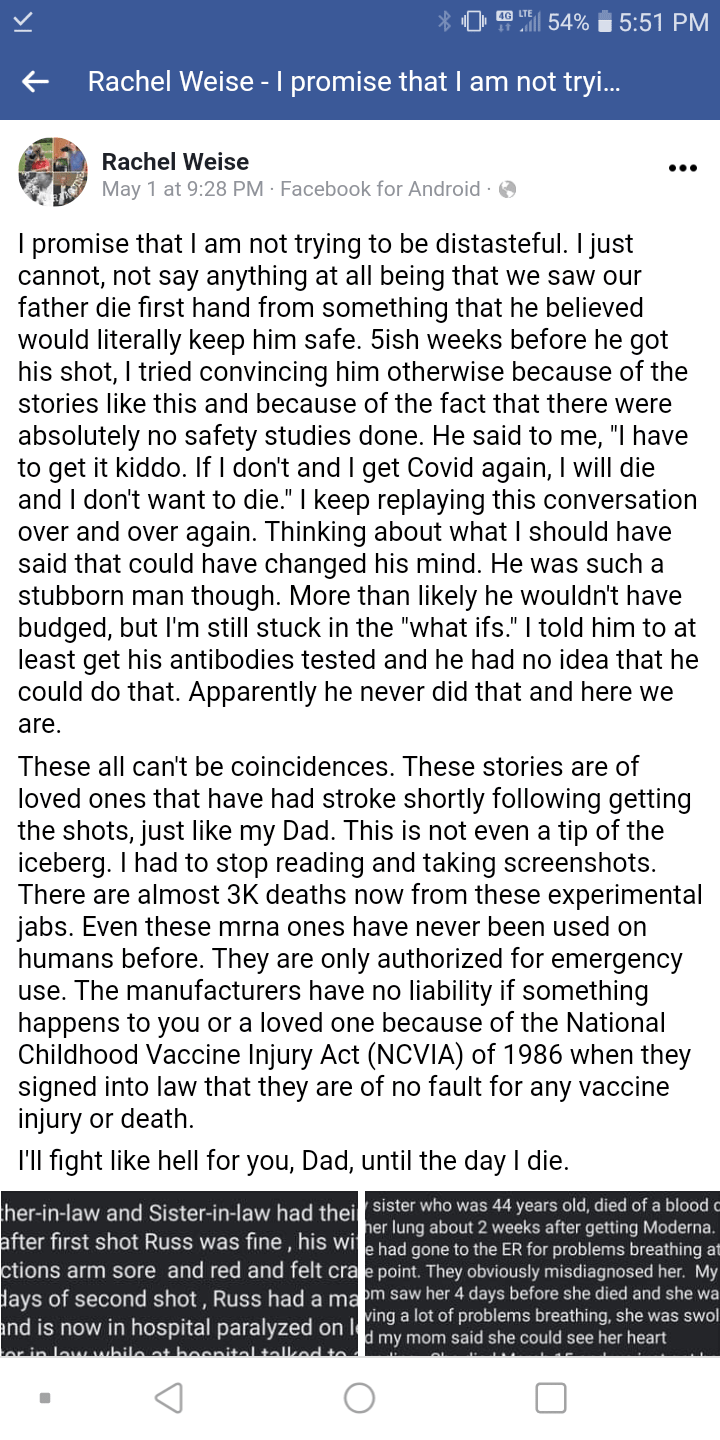 Several other family members are also using their platforms to attempt saving others from these experimental shots.
Mr. Medved is survived by his parents, four children, several grandchildren, and nine siblings. The funeral service is Monday, May 10 in Coleraine, Minnesota.
Read the full article at The COVID Blog. 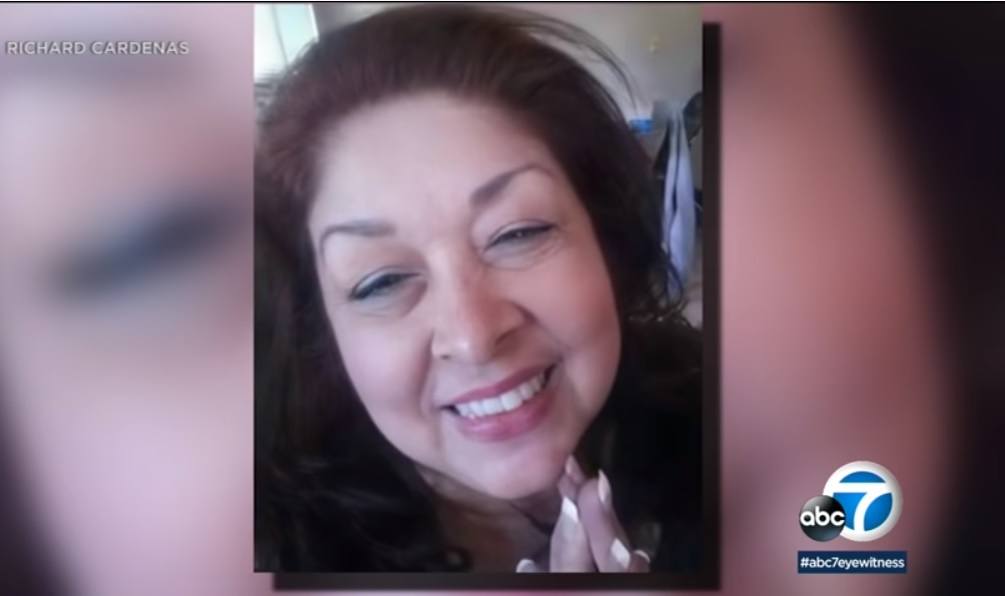 by Jessica De Nova
ABC7.com
Excerpts:
SANTA ANA, Calif. (KABC) — The Orange County Coroner’s office is investigating the death of a woman who died just days after she received her second dose of the Moderna vaccine.
The family says the grandmother was healthy before she got her shot, and that her sudden death came as a shock.
A conversation with staff at the Orange County Coroner’s office about Griselda Flores’ death, raised red flags for her son Richard Cardenas and the family.
“They made it seem like this was not the first call that they had,” Cardenas said.
Assistant Chief Deputy Coroner Brad Olsen says that’s right.
Olsen told Eyewitness News a handful of deaths, including Flores’, are under investigation because they happened one to three days after the person got a COVID-19 vaccine dose.
Cardenas says his mom was a healthy, outgoing, hard-working mother and grandmother.
The day after her second shot on April 14 at a CVS store in Orange, Flores complained of the expected side effects, such as chills, body aches and a fever.

“She looked really pale though, and she just said she was tired, and she was going to go home and sleep,” Cardenas recalled.

Two days after her second dose, Flores’ family says they found her dead in her room.
“I’m very, very worried about public safety because now, it’s just like, if my mom passed away, how many other people are going to pass away?” Cardenas said.
Read the full article at ABC7.com.
Comment on this article at HealthImpactNews.com.