Gas shortages are being reported in the Southeast of the US amid the recent cybersecurity attack that temporarily shut down one of the largest pipelines in the US.

Colonial Pipeline Co. Chief Executive Officer Joseph Blount said the company was in the process of restoring its systems but wouldn't resume fuel shipments until the ransomware had been removed, according to Bloomberg. 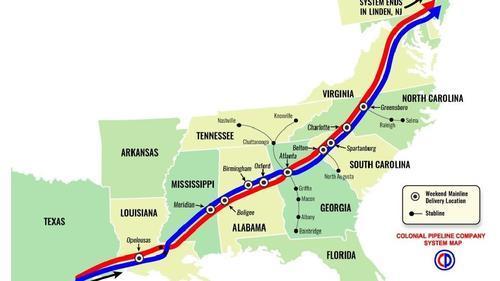 At the moment, Colonial Pipeline is manually operating a segment of pipeline between North Carolina to Maryland and expects a complete system restore by the weekend. However, gas shortages are already being reported across North Carolina to Florida to Alabama.
On Monday, North Carolina Governor Roy Cooper signed an Executive Order declaring a state of emergency, temporarily suspending motor vehicle fuel regulations to ensure adequate fuel supply supplies throughout the state.
WLOS' Caitlyn Penter reported gas shortages in North Carolina.

This gas station in Robbinsville is all out of gas. Clerk said manager told her it could be five days before they have gas again. Says phone has been ringing off the hook of people calling around to find gas @WLOS_13 pic.twitter.com/SCcwmb1Pc0
— Caitlyn Penter (@CaitlynWLOS) May 10, 2021

SKY HIGH GAS PRICES: We’ve received calls into the @weartv newsroom about this #gas station in #EscambiaCounty selling regular gas for $4.29/gallon. Within a minute of our news car showing up, it was dropped to $3.29. Check it out

One South Carolina gas station was out of unleaded and plus. 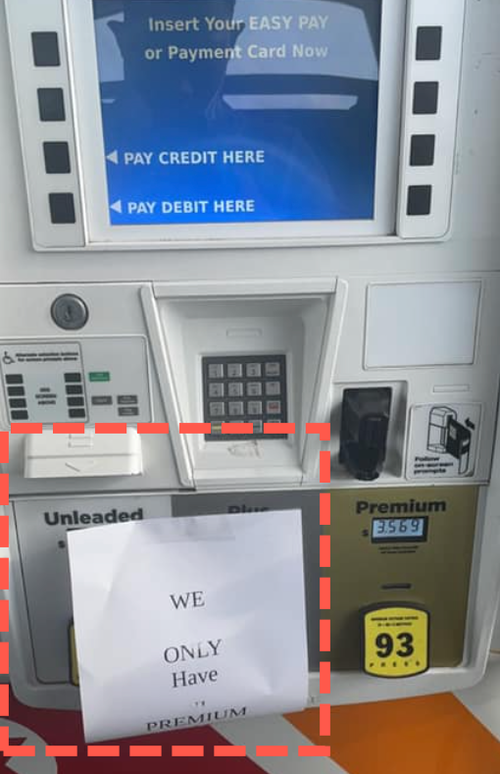 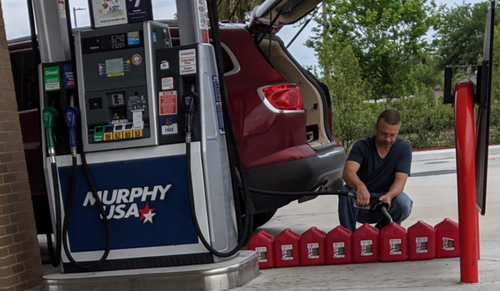 People are getting worried about the shortage.

Need an idea for what to do if gas becomes too high to fill up lawnmowers or if there's a shortage?

A massive line of people waiting for fuel in Asheville, North Carolina.

Video coming out of Asheville, North Carolina show the fuel shortage in effect.

Some gas stations are completely out of supply, while others have lineups. pic.twitter.com/7xrSoPA99G
— Marie Oakes (@TheMarieOakes) May 11, 2021

People waiting to fuel up at one gas station in Plymouth, North Carolina.

Gas stations are running out, Plymouth NC lines are around the building. 4 stations are out. #gasshortage pic.twitter.com/TcIwRpCsBG
— Fly on the wall (@Huge2na) May 11, 2021

Not sure where, but the run has begun.

According to Google Search Trends, people started panic searching "gas shortage" around 1300 ET in the Southeast. 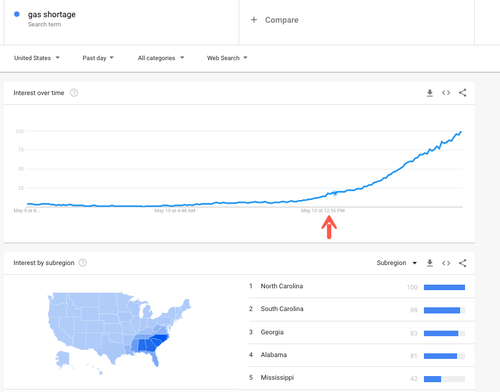 So far, nationwide gas prices have surged six cents this week to $2.96 - the highest for this time of year since 2014. If the national average soars to $2.99 or higher this week, it will be the highest since November 2014... and right before the start of summer driving season. 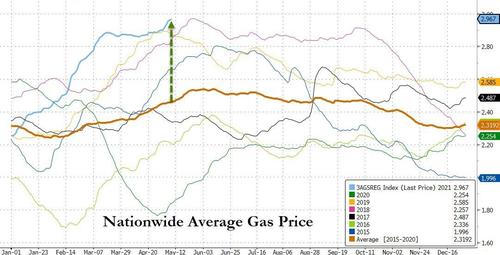 AAA forecasts gas prices are soaring because of the shutdown of the Colonial Pipeline, which delivers about 45% of all fuel to the East Coast.

"This shutdown will have implications on both gasoline supply and prices, but the impact will vary regionally. Areas including Mississippi, Tennessee, and the east coast from Georgia into Delaware are most likely to experience limited fuel availability and price increases, as early as this week," said Jeanette McGee, AAA spokesperson. "These states may see prices increase three to seven cents this week."

This is beginning to look like the 1970s gas shortage. If the panic just started hours ago - just wait until tomorrow. People will freak.

» ‘Revolution Has Begun’: 75,000 Brits To Stop Paying Power Bills Amid Inflation Storm
» Stations of Light are Established
» Stations of the cutting edge establish
» Firefighters Don’t Want 5G Cell Towers Near Their Stations
» KP Message… “Moving to our ‘Stations of Light’”