The Death of Common Sense

COVID and the Loss of Common Sense
Date: May 14, 2021Author: Nwo Report

Source: Don Fotheringham
If every cloud has a silver lining, COVID’s silver, from which we should try to benefit, has shone the light on the shallowness and fragility of our commonsense.   Few of us are immune to the all-powerful assault of fear — of death for ourselves or those we love — a favorite toxin employed by anyone whose main goal is control of the target.
It began fourteen months ago when death was served up in huge helpings with morning coffee.  The initial assault was blitzkrieg shock — irresistible.  But two months further on, with data rolling in, too few of us asked too few questions or even managed: “But wait a minute …”.  Overwhelmed, commonsense in free fall, we accepted confining restrictions to freedom of movement and eagerly embraced uncomfortable behaviors with breath taking speed and acquiescence.
Fourteen months into the pandemic and so many persist in their immunity to any hint of commonsense, risk and cost/benefit analysis – common skills in everyday life — despite a mother lode of data that show our reactions remain disproportionate to the attack.  The examples are legion and stunning.  On August 7th, 2020 over 400,000 mask-less, non-distancing bikers descended on Sturgis, SD (population 7,000) for nine days.  Supposedly, this was an epidemiologist’s nightmare of catastrophic magnitude, the rally was condemned by all as wholly irresponsible, predicting consequent illness and death for thousands — the mother of all super-spreaders.  It’s worth taking a moment to grasp the significance of the numbers involved.  The largest stadiums in the world hold a bit over 100,000 people.  Additionally, South Dakota never pulled the lockdown trigger and was therefore ripe for carnage.  To date, Meade County (Sturgis) has reported thirty deaths – over the last fourteen months.  But the fear mongers persist: “They came, shared, and took the virus home with them causing death everywhere else.”
The latest fodder for the deadly brew of fear and propaganda: “India’s death toll hits new record as COVID ‘tsunami’ worsens” – the headline reads.

“Can you believe about four thousand people, and perhaps many, many more are dying every day from the virus in India?”
“Yes, I heard. It’s terrible.  Do you know the population of India?  Do you know how many people die every day in India pre-pandemic?”
“No but what’s that got to do with anything?  One death is too many!”

Recently, the New York Post used a misleading image in an article published on its website about the COVID-19 crisis in India. The article titled “COVID-19 surge ‘swallowing’ people in India, the footage shows people dead in streets” used a featured image in which a woman was seen lying unconscious on the road, with another woman, presumably her daughter trying to wake her up.  However, the image is not from the ongoing COVID-19 outbreak in the country. The image is from a video clip shot during the gas leak incident in Visakhapatnam which took place in May 2020. The incident referred to as the Vizag gas leak, took place on 7 May 2020 at the LG Polymers chemical plant in the R.R Venkatapuram village.  … India is in the midst of a raging coronavirus outbreak. There is no denying the fact. But the crisis is nowhere as grim as the foreign media outlets are exaggerating it to be. For a long time now, global media organisations have a habit of understating India’s stellar achievements and overstating the problems bedevilling it.
The COVID-19 outbreak has revealed how, in their bid to show India in a bad light, the western media outlets have no qualms in using misleading old images and footages and paint a picture of doom and gloom.

That the New York Post could not easily find an accurate image in light of the reported widespread devastation ought to at least provoke a hesitant “But wait a minute …”
Can we have an adult conversation about death?  Two people die in a car accident, one ten years old, the other eighty.  Both deaths are regrettable and sad, but the former is tragic.  Until last year, everybody understood this to be true.  This explains the horror of war death tolls since the dead are very young.  If life expectancy is eighty, then years of life lost (YLL) is seventy (70 for the ten-year-old and 0 for the eighty-year-old).  Why does every conversation about death statistics not calculate YLL?
While they are all sad, 40,000 COVID deaths are not equivalent to 40,000 car accident deaths.  If the average age of COVID death is 70, the result is four hundred thousand YLL (10 x 40,000).  If the average age of auto death is 30, the result is two million YLL (50 x 40,000).  We could reduce car accident death to virtually zero by mechanically restricting the maximum speed of any vehicle to 20 mph.  We opt instead to live year in year out with the carnage resulting from speeds we have decided to tolerate — presumably because the benefits outweigh the costs.  But if you were to suggest applying the same pattern of thinking to COVID, you would be denounced as a heartless, raving lunatic.
Similarly, it is unacceptable to present the public domain data (e.g. worldometers.com) for measuring the effectiveness of lockdowns.  Compare the death tolls for North and South Dakota – the former imposed lockdown, the latter, not.  Given the strong similarities of the two states, there should be a glaring difference in death metrics.  Add the Sturgis rally and the differences should be not just stark but irrefutably stunning.  Instead: Charts showing seven-day running death totals for the two States are virtually identical.  How can that be if lockdowns are effective?  Don’t you dare ask!
It is generally agreed that comparisons among countries, while complex, must at least use the same measurement: deaths per million.  Sorted by this metric (at this writing), the data show the most dangerous place on the planet is … drum roll … Hungary followed closely by Gibraltar.  Italy is number 12, the UK at 15.  The USA is in the 18th position; Sweden, 33rd; Canada, 64th.  India?  Position 110 at 180 deaths per million.  There are 46 countries with a death rate of over 1,000 per million.  Now it’s likely that India’s deaths are under-reported but even at an error factor of ten it will just surpass the United States.
But the media, feeding an insatiable need for eyes on screens (revenue), and those who wish to retain control over our lives will never provide sobering data that argues against the conclusion caused by fear.  Hot hearts is their currency, not cool heads and certainly not common sense. Until we admit, with some shame and humility, the fragility of commonsense, we will never find a cure.
Photo credit: Reuven Rosenberg CC BY-NC 2.0 license
To comment, you can find the MeWe post for this article here. 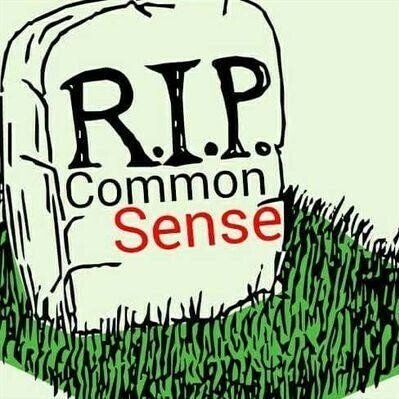 » Welcome To Mortgage Endgame .... As of 2011, 31 million active mortgages with their associated Chains of Title are in mortal jeopardy
» THIS IS ONE OF THEM: Is there any honesty, morality, common sense left
»  Common Sense 2018 by Anna Von Reitz plus more
» Thomas Sowell: Common Sense in a Senseless World
» Denmark Heads to Pre-COVID Normality: No Masks or Distancing in Schools, Just Common Sense