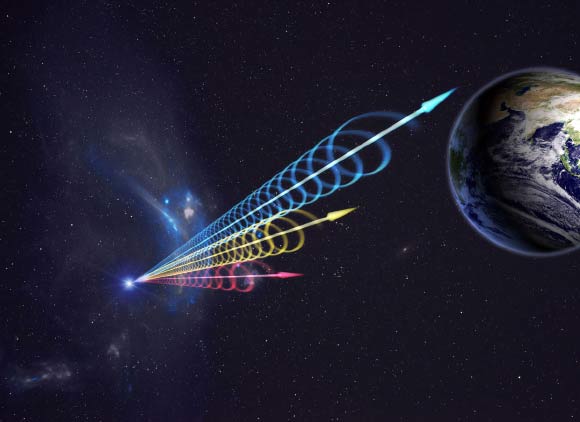 An artist’s impression of FRB 110523 reaching Earth; the colors represent the burst arriving at different radio wavelengths, with long wavelengths (red) arriving seconds after short wavelengths (blue). Image credit: Jingchuan Yu / Beijing Planetarium.
Fast radio bursts (FRBs) are one of the great unsolved mysteries in astronomy.
Though a plethora of models has been proposed to explain these intense millisecond-duration pulses of radio emission, their origins remain a topic of debate, largely due to the paucity of well-localized FRBs.
“Before CHIME, there were less than 100 total discovered FRBs; now, after one year of observation, we’ve discovered hundreds more,” said Kaitlyn Shin, a graduate student in the Department of Physics at MIT and a member of the CHIME/FRB Collaboration.
“With all these sources, we can really start getting a picture of what FRBs look like as a whole, what astrophysics might be driving these events, and how they can be used to study the Universe going forward.”
“In some cases, it takes thousands of hours of observations to detect a single burst from some FRBs, while others have repeated within the span of tens of hours,” said Pragya Chawla, a Ph.D. candidate in the Physics Department at McGill University and a member of the CHIME/FRB Collaboration.
“Our current sample indicates that there are significant differences in the properties of repeaters and non-repeaters and future studies will allow us to determine whether the two kinds of events are generated by different astrophysical phenomena.”
From the 535 FRB events detected by CHIME, the astronomers calculated that bright FRBs occur at a rate of about 800 per day — the most precise estimate of FRBs overall rate to date.
When they started mapping the locations of the FRBs seen between 2018 and 2019, they found that the bursts were distributed uniformly across the sky, suggesting that the FRB population is spread throughout the Universe and not located simply in our Milky Way Galaxy.
For each of the 535 FRBs, they measured its dispersion, and found that most bursts likely originated from far-off sources within distant galaxies.
The fact that the bursts were bright enough to be detected by CHIME suggests that they must have been produced by extremely energetic sources.
With more observations, astronomers hope to pin down the extreme origins of these curiously bright signals soon.
“FRBs also carry information about the medium that they travel through,” said Dr. Saurabh Singh, a postdoctoral researcher in the Physics Department at McGill University and a member of the CHIME/FRB Collaboration.
“With the significant increase in their detections over a range of distances from us, they potentially offer an independent measurement of matter distribution in the Universe.”
“Having a large sample of FRBs unlocks countless possibilities. As one example, we are now in the era of using FRBs as cosmological probes,” said Alex Josephy, a Ph.D. student in the Physics Department at McGill University and a member of the CHIME/FRB Collaboration.
“We can begin examining large-scale structures — clusters of thousands of galaxies. We can help map the distribution of cosmic dark matter and study the evolution of matter throughout our Universe’s history.”
“Nearby FRBs, such as some of those described in the new CHIME/FRB catalog are inarguably the best sources to test models of the origins and properties of FRBs,” said Mohit Bhardwaj, a Ph.D. student in the Physics Department at McGill University and a member of the CHIME/FRB Collaboration.
“If we want to learn the most about FRBs, like if they shine in optical or X-ray light, nearby FRBs are our best options!”
The researchers presented these results and the first CHIME/FRB catalog this week at the 238th meeting of the American Astronomical Society (AAS).