ATLANTA — Mainstream media smugly and without shame dismiss all facts, science and observations about the experimental COVID-19 injections as “conspiracy theory.” CNN, which has more commercial time for pharmaceutical products than all the other networks, is notorious for this.
We’ve all seen the thousands of videos of vaxxed people sticking metal objects on the site of the shot. All of them feel the magnetic pull. But CNN, of course, wants you to dismiss what you see with your own eyes, and simply believe what you’re told by them.

Dr. Michael Yeadon is the former Chief Scientific Officer and Vice President of Pfizer. He warned everyone in December that these experimental mRNA shots will lead to mass infertility. Women will no longer be able to form placentas and thus, cannot carry babies. We’ve also seen frightening menstrual cycles from non-vaxxed women who were in close proximity of vaxxed people.
Dr. Roger Hodkinson, a British pathologist, found that the spike proteins in the experimental mRNA shots effectively sterilize men. He stated the obvious, in that the 2-3 months of so-called clinical trials were not nearly enough to know the long-term effects of these shots. Of course mainstream media “fact-checkers” say they have “debunked” Dr. Hodkinson.

There is also now a coordinated campaign to deflect attention away from the Vaccine Adverse Event Reporting System (VAERS). The system, managed by the Centers for Disease Control and Food and Drug Administration, has been around since 1990 and existed in relative anonymity until 2021. That’s because the number of deaths related to vaccines in the first six months of 2021 stands at 5,888. The highest year prior to 2021 (which still has six months left in it) had around 500 vaccine-related deaths. 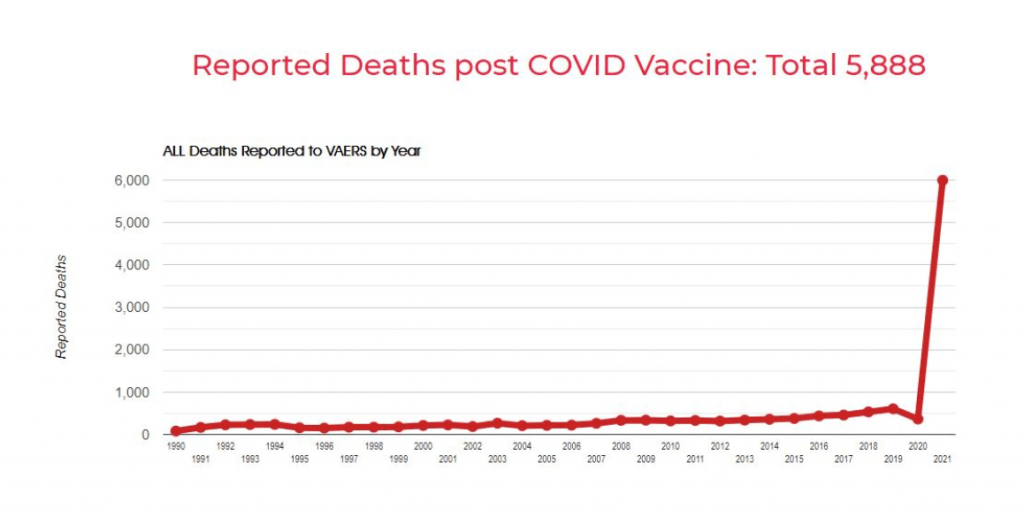 Harvard Pilgrim Health Care found in 2010 that less than 1% of all vaccine adverse reactions are reported to VAERS. Thus VAERS numbers must be multiplied by 100 to get a good idea of the real situation. That means at least 588,000 Americans have died after experimental COVID-19 shots. But there is another highly disturbing pattern in VAERS that does not get the same amount of press as deaths.

You read that right. As of June 11, there are 522 cases of spontaneous abortion after experimental COVID-19 shots reported to VAERS.

Again if we use Harvard Pilgrim Health Care extrapolation, that means there have likely been well over 52,000 spontaneous abortions after vaccines since January. Abortions, spontaneous or otherwise, are very personal events for women. Thus few are going to report it publicly.
Dr. Sara Beltrán Ponce posted about her spontaneous abortion on Twitter in February. Pediatric nurse Mary Voll posted about hers in March and threatened us with some sort of legal action for re-posting her own words. We hope that our coverage of these stories stops the virtue signaling. The VAERS accounts of spontaneous abortions all sound very similar.
A 40-year-old woman miscarried 30 days after the second Pfizer shot. A 36-year-old New Jersey woman was 16-weeks pregnant when she lost her baby three weeks after the second Pfizer shot. A 26-year-old South Dakota woman with a history of healthy, full-term pregnancies, lost her baby six days after the second Moderna shot.
Then there’s the 27-year-old Pennsylvania woman. She received her second experimental Pfizer mRNA shot on February 23. That same day, she discovered she was pregnant. Four weeks later, doctors found that her baby had no heartbeat.
Nearly all of these spontaneous abortions resulted from Pfizer and Moderna shots. Read more of the case here.

Society needs to eliminate manipulative terms like pro-choice and pro-life. All pro-choice means is pro-abortion in the United States. These same people (liberals/Democrats) say you have no choice but to receive experimental mRNA and viral vector DNA injections, wear masks, etc. It makes sense that this crowd is pro-vaxx because these shots cause abortions.
Meanwhile, pro-life simply means anti-abortion. That is all fine and commendable. But this same crowd (Republicans) are mostly pro-death penalty and pro-military. It’s no secret that Republicans are pretty much the last hope for reasonable resolution with this COVID-19 agenda. But let’s not forget that former President Donald Trump not only encourages his followers to get the experimental shots, but also wants credit for creating them.

rust no politicians. These people are all bought and paid for. Pfizer will bring in $26 billion in 2021 alone from these “free” experimental shots. An entire generation of college-educated kids is likely to be sterilized this fall as virtually all U.S. universities are mandating experimental shots. Don’t let this happen to yourself or your children. Stay vigilant and protect your friends and loved ones.

COVID Legal USA is helping Americans and others fight against mandatory vaccines. Our platform is disrupting the entire legal industry. We utilize databases and artificial intelligence that allow pro se litigants to draft legal briefs simply by answering questions. We’ll be seeking Series A funding in the very-near future to take our project to the next level. Follow us on Telegram.