Former Intel Chief Calls For “Larger Discussion” On UFOs, Warns They Display Technology US Doesn’t Have

Former Intel Chief Calls For “Larger Discussion” On UFOs, Warns They Display Technology US Doesn’t Have Wed Jun 30, 2021 10:40 am 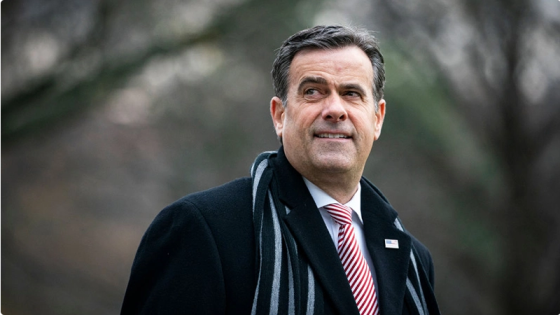 Source: Tom Ozimek | The Epoch Times
Former Director of National Intelligence John Ratcliffe said that Unidentified Aerial Phenomenon (UAP), also known as UFOs, appear to display technology that the United States does not have and could not defend against.
Ratcliffe made the remarks in an interview on Fox News that aired Saturday, one day after the public release of a much-anticipated government report on UAPs or UFOs (pdf), which found “no clear indications that there is any non-terrestrial explanation” for the aerial phenomena, although it left open the possibility of an alien origin.

“I’m actually glad that there’s a report out there,” Ratcliffe said in the interview, adding, “the bottom line is, unidentified aerial phenomena—many, many cases we’re able to explain it away for reasons like visual disturbances, or weather phenomenon, or foreign adversaries and their technologies, or even our own experimental technologies with certain aircraft and vehicles.”

“And there are technologies that we don’t have and frankly that we are not capable of defending against—based on those things that we’ve seen, multiple sensors, in other words, where not just people visually see it but where it’s picked up on radar, where it’s seen on satellites,” Ratcliffe said, adding that, “it’s an issue of national security.”

Ratcliffe suggested it’s unsettling that some of the aerial phenomena defy explanation.

“It’s not good to say, ‘Gosh, we don’t have good answers.’ And so, we have to have a larger discussion to try and figure out specifically what this is all about,” he said.

Gerald Celente of https://trendsresearch.com guest hosts The Alex Jones Show to break down why Biden is dropping bombs in the Middle East.
The report, which was issued by the Office of the Director of National Intelligence (DNI) in conjunction with a U.S. Navy-led UAP task force, studied 144 observations of unidentified aerial phenomena, dating back to 2004, of which 11 caused “near misses” for military pilots.

“UAP pose a hazard to safety of flight and could pose a broader danger if some instances represent sophisticated collection against U.S. military activities by a foreign government or demonstrate a breakthrough aerospace technology by a potential adversary,” the report reads.

The report added that defense and intelligence analysts don’t have enough data to determine the nature of UAP observed by military pilots, noting that they could fall into a number of categories, including foreign adversary systems, natural atmospheric phenomena, or “other,” a catchall category that, theoretically, could include extraterrestrial technology.

“UAP clearly pose a safety of flight issue and may pose a challenge to U.S. national security,” the report stated, adding that the phenomena “probably lack a single explanation.”

The Pentagon established the Unidentified Aerial Phenomena Task Force last August to explore observations of aircraft of unknown origin. The task force aimed to “detect, analyze and catalogue” such events, and to “gain insight” into the “nature and origins” of UFOs, the Pentagon said.
In the run up to the release of the report, Sen. Marco Rubio (R-Fla.) said last month that members of Congress and other officials need to seriously investigate UFOs and the potential threat they pose.


Speaking to CBS News’ “60 Minutes,” the Florida Republican described a “stigma on Capitol Hill,” in which some lawmakers “are very interested in this topic,” but some “kind of giggle when you bring it up.” However, he cautioned, “I don’t think we can allow the stigma to keep us from having an answer to a very fundamental question.”
The senator said he wants the Pentagon to come up with a process to take UAP seriously.
“I want us to have a process to analyze the data every time it comes in,” he said. “That there be a place where this is cataloged and constantly analyzed, until we get some answers. Maybe it has a very simple answer. Maybe it doesn’t.”