https://www.accuweather.com/en/severe-weather/death-toll-deadly-china-flooding-zhengzhou-henan-province/985921
By Maura Kelly, AccuWeather meteorologist
Updated Jul. 21, 2021 12:51 PM PDTCopiedhttps://imasdk.googleapis.com/js/core/bridge3.472.0_en.html#goog_1220455419Volume 0% Dangerous and devastating flooding in China
Over 100,00 people have been evacuated and 12 people have died so far from flooding in Zhengzhou, China.
Dramatic rescues have been taking place across parts of central China this week after record-setting rainfall turned streets and subways into raging rivers, and AccuWeather meteorologists warn that rain and thunderstorms will continue in the coming days.
As of Wednesday night, local time, at least 25 people deaths were being blamed on the flooding, which occurred after days of heavy rainfall swamped cities across the Henan province in east-central China, The Associated Press reported.
Rain that first arrived across this portion of central China on Sunday continued at times through Tuesday, dumping record-breaking rainfall over the province. 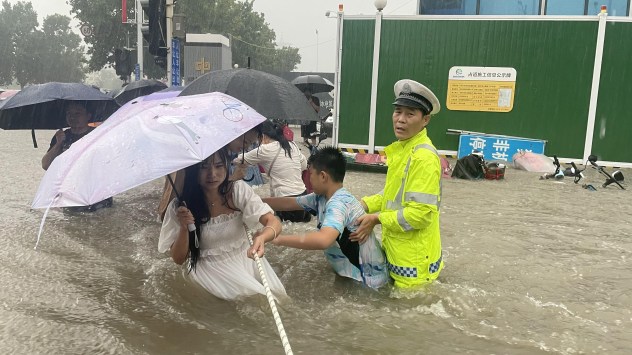 A traffic police officer guides residents to cross a flooded road with a rope during heavy rainfall in Zhengzhou, Henan province, China, July 20, 2021. Picture taken July 20, 2021. China Daily via REUTERS
Soldiers were deployed to divert rivers and pump floodwaters after flood prevention systems were overwhelmed across Zhengzhou, the capital city of Henan, situated along the Yellow River, and neighboring cities, the BBC reported.
According to the World Meteorological Organization, the rainfall over a period of four days in Zhengzhou was more than what typically falls throughout the entire year. Not only that, according to Reuters, the Zhengzhou weather bureau said rainfall totals over the three days were an occurrence that happens only “once in a thousand years.”
Streets were turned into rivers, easily pulling cars downstream and catching some people in the swift rapids. Floodwaters also poured into the region’s tunnels and subway systems.
CLICK HERE FOR THE FREE ACCUWEATHER APP
Videos emerging on social media showed commuters trapped in subway cars as water levels rose. Eventually, as the water level increased, the commuters struggled to keep their heads above water. According to the BBC, more than 500 people were rescued from the tunnels.
According to CGTN, 150 children and teachers had to be rescued after a nursery filled with floodwaters. Firefighters used plastic bins to float the kids out of the building and to higher ground.
The BBC reported that 200,000 evacuations have taken place due to rising water levels and power outages.
Some of the evacuations included the First Affiliated Hospital of Zhengzhou Hospital, which has been coined “the largest hospital in the world” after the building lost power for a period of time. 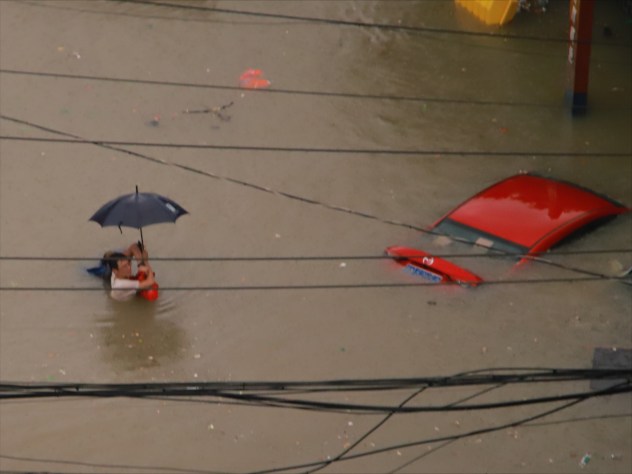 People try to commute through floodwater caused by a rainstorm in Zhengzhou City, central China’s Henan province, 21 July 2021. (Local media via Reuters)
According to a local reporter, families of patients gathered outside as 600 critically ill patients were transferred to another facility. One resident told the BBC that they had no water, electricity or power.
Farther north in Luoyang, officials announced that a 65-foot (20 m) crack had developed in the dam following heavy rainfall, and warned that the dam could “collapse at any time,” the BBC reported.
Residents in the town of Sishui were stranded on rooftops as floodwaters rose.
On Wednesday night, local time, severe flooding was also reported in Xinxiang and Hebi, all located in the Henan province.
AccuWeather Lead International Meteorologist Jason Nicholls said that an area of low pressure that formed along a stationary front over central China is to blame for the flooding rainfall across Henan province.
In other news:Typhoon In-fa churns in West Pacific on course toward China, TaiwanHow the Bootleg Fire is generating its own weatherCities disappear behind veil of dangerous wildfire smoke
“The strong area of high pressure over the Sea of Japan just east of the Korean Peninsula has helped to bottleneck the pattern in eastern China,” Nicholls added.
This slowing down of the storm helped to create the phenomena known as training thunderstorms.
“Training describes when thunderstorms repeatedly build back over the same locations that have already been impacted by storms. It’s akin to multiple cars of a freight train passing over the same section of track, one after the other,” said AccuWeather Meteorologist Mary Gilbert.
Rainfall totals quickly skyrocketed for locations trapped under training thunderstorms.
In Zhengzhou, around 24.6 inches (624 mm) of rainfall was reported in just 24 hours on Tuesday, according to China’s meteorological authority. One-third of that rainfall fell during the 4 p.m. hour, local time, which “smashed historical records,” the BBC reported.
Serious flooding has been an ongoing concern across the country. Heavy rainfall caused severe flooding in multiple areas of China last week, including in the southwestern province of Sichuan where more than 120,000 were affected. Dramatic video captured several vessels being tossed over a raging waterfall on a swollen river near the city of Bazhong. 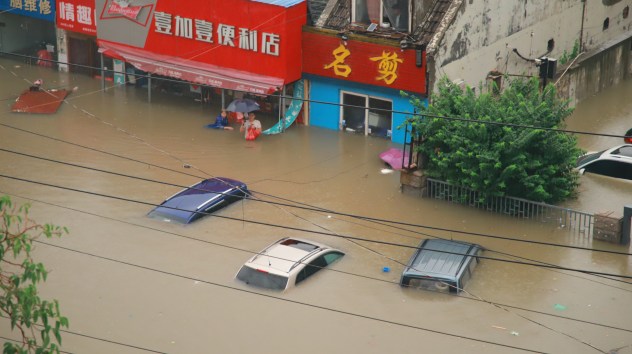 People try to commute through floodwater caused by continuous rainstorm in Zhengzhou City, central China’s Henan province, 21 July 2021. (Local media via Reuters)
Rounds of showers and heavy thunderstorms are expected to linger over east-central China on Thursday and Friday as the stationary front remains draped over the region.
A break in this weather pattern is expected to arrive as Typhoon In-fa makes landfall over the eastern coast of China by this weekend.
As the typhoon approaches land, showers and thunderstorms farther inland will be stunted as high pressure develops to balance out the low pressure at the coast.
Keep checking back on AccuWeather.com and stay tuned to the AccuWeather Network on DirecTV, Frontier, Spectrum, FuboTV, Philo, and Verizon Fios.

» In the Past Year, Chinese Investors Purchased $6.1 BILLION Worth of Property in The US
» Runaway Tiangong-1 Chinese space station could re-enter OVER a major city NEXT YEAR
» Tropical Cyclone "Mekunu" slams into Oman as strongest in recorded history, dumps nearly 3 years' worth of rain in one day
» DINAR WILL BE OPENED ON JAN 23rd CHINESE TIME (Sunday) ...The RV Will Be Opened in a RED Envelope on Chinese New Year(January 23, 2012)
» Disaster unfolding after days of torrential rain in Myanmar