An analysis of the high-quality nuclear genomes previously published from three Neanderthals and one Denisovan shows that these extinct hominins were polymorphic for ABO blood groups and shared blood group alleles — different versions of the same gene — recurrent in modern sub-Saharan populations. 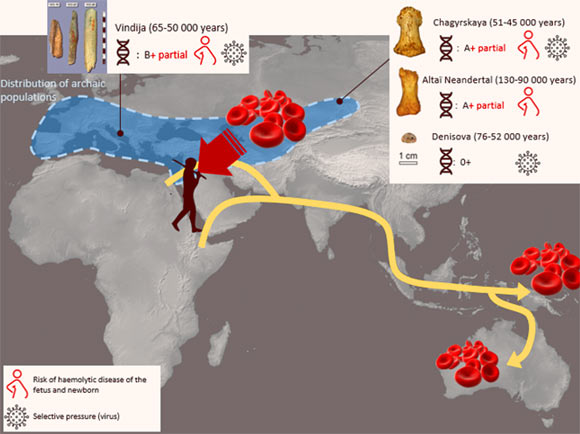 Condemi et al. analyzed the blood types of Neanderthals and Denisovans by looking at their DNA. Image credit: CNRS.
Neanderthals are a human hunter-gatherer fossil population that lived in Eurasia between 250,000 and 38,000 years ago before being totally replaced throughout their territory by Homo sapiens.
Morphological features progressively evolved from their African ancestors and adapted to the cooler climate of Europe.
Their arrival in Europe marks a major cultural change with the importation of a new tool, well known in Africa since at least 1.5 million years ago and in the Levant, the handaxe.
The Denisovans are also an extinct human population but bone record is too fragmentary.
“Over the last decade, technological progress has allowed generation of data from the entire genome of some fifteen extinct Neanderthals and Denisovans who lived 40,000 to 100,000 years ago from Western Europe to Siberia,” said Dr. Silvana Condemi of the Aix Marseille University and CNRS, and her colleagues.
“It revealed population structure, several demographic fluctuations and gene flows across hominin populations, worldwide dispersal of archaic genes by admixed Homo sapiens, and even the existence of a super-archaic ‘ghost’ population.”
“In addition, the availability of Neanderthal and Denisovan DNA sequences provided a phylogenetic status and chronological depth that have significantly enhanced the understanding of gene variation in modern humans.”
“In transfusion, it is routine practice to scrutinize six blood groups: ABO, Rh, Kell, Duffy, Kidd and MNS,” they added.
“Curiously, despite their significance and the amount of available genotypic data on modern humans that is continuously accumulating, almost no attention has been paid to these major red cell blood polymorphisms in paleogenetic studies.”
In the new study, the researchers analyzed the available high-quality sequences of three Neanderthal and one Denisovan individuals for 7 blood group systems that are used today in transfusion.
They found that these ancient hominins displayed the full range of ABO variability observed in modern humans.
The ancient individuals also had blood type alleles in combinations that are consistent with the idea that Neanderthals and Denisovans originated in Africa.
“We found ABO-related alleles currently preventing from viral gut infection and Neanderthal alleles nowadays associated with a high risk of hemolytic disease of the fetus and newborn,” the scientists said.
“Such a common blood group pattern across time and space is coherent with a Neanderthal population of low genetic diversity exposed to low reproductive success and with their inevitable demise.”
The authors also connected one Neanderthal allele to present-day Aboriginal Australian and Papuan populations.
“The new partial RHD allele, RHD*DIII type4 with c.602G and c.733C, reported in the three Neanderthal individuals, and not in Denisovan, was unknown in modern humans until 2019 and its description as a new variant in an individual from the First Nation of Australia,” they said.
“Thus, this polymorphism is not a new variant in the historical sense of the term, as it was already present around 100,000 years ago in Neanderthals.”
“This result fuels the discussion about admixture events between the different lineages and also about the early dispersal of Homo sapiens via the Arabian Peninsula towards Australia and Oceania.”
The results appear online in the journal PLoS ONE.
_____
S. Condemi et al. 2021. Blood groups of Neandertals and Denisova decrypted. PLoS ONE 16 (7): e0254175; doi: 10.1371/journal.pone.0254175