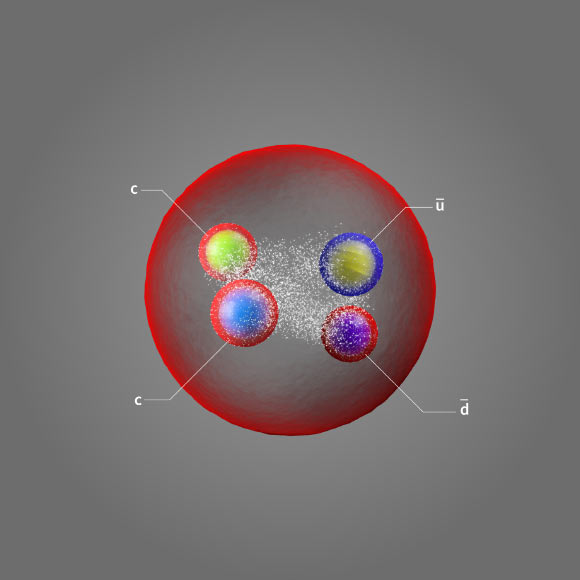 An artist’s impression of Tcc+, a tetraquark composed of two charm quarks and an up and a down antiquark. Image credit: CERN.
Quarks are the fundamental building blocks from which matter is constructed.
They combine to form hadrons, namely baryons, such as the proton and the neutron, which consist of three quarks, and mesons, which are formed as quark-antiquark pairs.
Several tetraquark particles have been discovered in recent years, but Tcc+ is the first one that contains two charm quarks, without charm antiquarks to balance them. Physicists call this ‘open charm’ (in this case, ‘double open charm’).
Particles containing a charm quark and a charm antiquark have ‘hidden charm’ — the charm quantum number for the whole particle adds up to zero, just like a positive and a negative electrical charge would do. Here the charm quantum number adds up to two, so it has twice the charm.
Tcc+ is also the first particle to be found that belongs to a class of tetraquarks with two heavy quarks and two light antiquarks.
Such particles decay by transforming into a pair of mesons, each formed by one of the heavy quarks and one of the light antiquarks.
According to some theoretical predictions, the mass of tetraquarks of this type should be very close to the sum of masses of the two mesons.
Such proximity in mass makes the decay ‘difficult,’ resulting in a longer lifetime of the particle, and indeed Tcc+ is the longest-lived exotic hadron found to date.
“We have discovered a ccūd tetraquark with a mass just below the D*+D0 threshold which, according to most models, indicates that it is a bound state,” said Dr. Ivan Polyakov, a physicist at Syracuse University and a member of the LHCb Collaboration.
“It still decays to D mesons via the strong interaction, but much less intensively than other exotic hadrons.”
The new Tcc+ tetraquark is an enticing target for further study. The particles that it decays into are all comparatively easy to detect and, in combination with the small amount of the available energy in the decay, this leads to an excellent precision on its mass and allows the study of the quantum numbers of this fascinating particle.
“Its narrow decay into a D0D0π+ final state — the virtual D*+ decays promptly into D0π+ — includes no particles that are difficult to detect, leading to a better precision on its mass than for existing measurements of charmed baryons,” the LHCb physicists said.
“This, in turn, can provide a stringent test for existing theoretical models and could potentially probe previously unreachable QCD effects.”
“And, if detected, its beautiful cousin would be an even bigger boon.”
“Observing a tightly bound exotic hadron that would be stable with respect to the strong interaction would be a cornerstone in understanding QCD at the scale of hadrons,” Dr. Polyakov said.
“The bbūd , which is believed to satisfy this requirement, is produced rarely and is out of reach of the current luminosity of the LHC.”
“However, it may become accessible in LHC Run 3 or at the High-Luminosity LHC.”
“In the meantime, there is no shortage of work in hadron spectroscopy,” added Dr. Vanya Belyaev, a physicist at Kurchatov Institute/ITEP and a member of the LHCb Collaboration.
“We definitely have more peaks than researchers!”
The LHCb team presented the results this week at the EPS-HEP Conference 2021.
_____
Franz Muheim et al. (LHCb Collaboration). LHCb Highlights. EPS-HEP Conference 2021
Ivan Polyakov et al. (LHCb Collaboration). Reсent LHCb results on exotic meson candidates. EPS-HEP Conference 2021