The NASA/ESA Hubble Space Telescope has produced a beautiful image of the small spiral galaxy IC 1954. 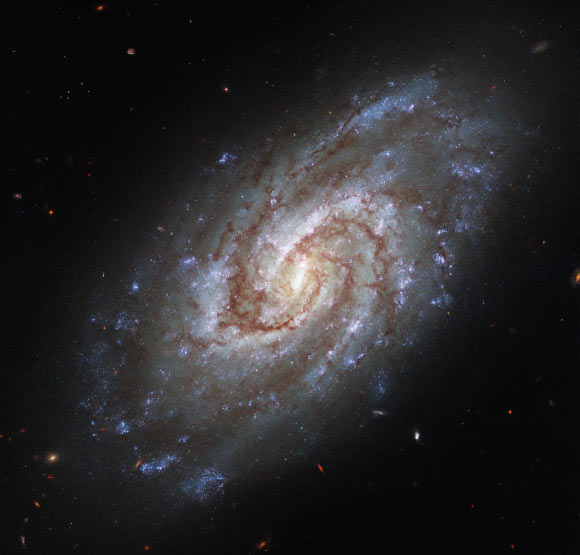 This Hubble image shows IC 1954, a spiral galaxy some 45 million light-years away in the constellation of Horologium. Image credit: NASA / ESA / Hubble / J. Lee / PHANGS-HST Team.
IC 1954 is located approximately 45 million light-years away in the southern constellation of Horologium.
This spiral galaxy was discovered in 1898 by the Scottish astronomer Robert Innes.
IC 1954 has a bright central bar and lazily winding spiral arms threaded with dark clouds of dust.
Otherwise known as ESO 200-36, IRAS 03300-5204 or LEDA 13090, it has a diameter of 20,000 light-years.
Together with four other galaxies, it forms the LGG 93 galaxy group (also known as the IC 1954 group).
“This portrait of IC 1954 is one of a set of observations designed to take advantage of some telescope teamwork,” Hubble astronomers said.
“Hubble observed groups of young stars in nearby galaxies at ultraviolet and optical wavelengths while the Atacama Large Millimeter/submillimeter Array (ALMA) gathered data on star-forming disks and clouds of cold gas.”
“Combining the two sets of observations allowed astronomers to join the dots and understand the connections between young stars and the clouds of cold gas which give rise to them.”
“These observations also lay the groundwork for future observations with the upcoming NASA/ESA/CSA James Webb Space Telescope, which will peer into nearby galaxies and observe the earliest phases of star formation.”
The new image of IC 1954 was made from separate exposures taken in the visible and near-infrared regions of the spectrum with Hubble’s Wide Field Camera 3 (WFC3).
Five filters were used to sample various wavelengths. The color results from assigning different hues to each monochromatic image associated with an individual filter.