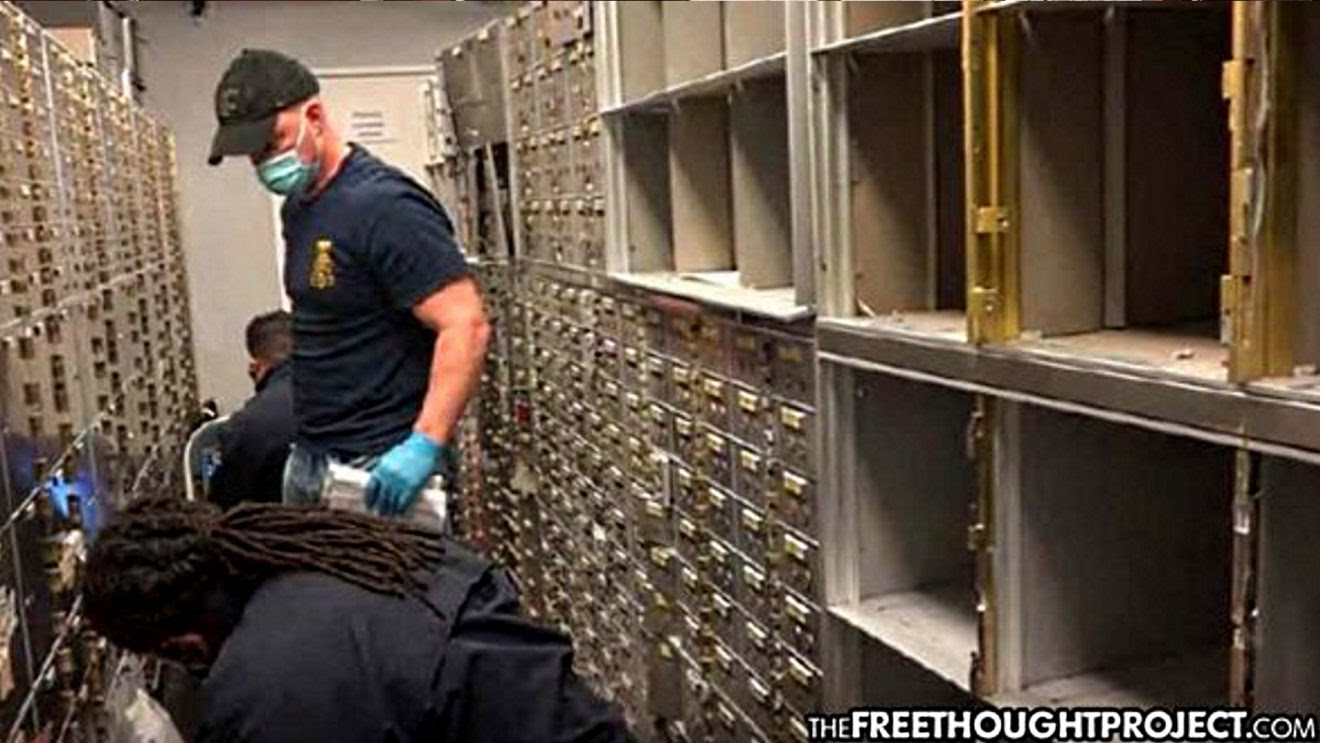 Los Angeles, CA — For decades now, federal government and their cohorts in law enforcement have been carrying out theft of the citizenry on a massive scale using Civil Asset Forfeiture (CAF).
The 1980’s-era laws were designed to drain resources from powerful criminal organizations, but CAF has become a tool for law enforcement agencies across the U.S. to steal money and property from countless innocent people.
As the following case out of Beverly Hills illustrates, no criminal charge is required for this confiscation, resulting in easy inflows of cash for law enforcement departments and the proliferation of abuse. This phenomenon is known as “policing for profit” and the latest example is exceedingly egregious.
Using bogus excuses, the FBI raided roughly 800 safety deposit boxes at a single location in Beverly Hills. They made random and apparently unsubstantiated accusations that the U.S. Private Vaults in Beverly Hills was aiding criminal activity. The business was indicted in February on claims that it marketed itself to criminals to help them launder money and dodge government detection.
But no one was ever charged.
Instead, the FBI raided the place and confiscated, or rather robbed people like Joseph Ruiz and others of their life savings. These folks like Ruiz were then forced to prove their innocence in order to get their money back.
The FBI falsely claimed that Ruiz, who is a chef, made the &57,000 they stole from him from drug dealing because a drug dog alerted to the presence of drugs on the cash.
It is widely known that a large percentage (upwards 0f 90%) of U.S. paper money contains trace amounts of cocaine. Having a large amount of cash will most assuredly alert a drug dog.
In fact, the U.S. Court of Appeals for the Ninth Circuit has ruled that government does not have probable cause to seize cash from individuals based only on a drug-detection dog’s reaction; stating specifically that the majority of money in circulation has drugs on it.
But court precedents and ethical enforcement of the law apparently mean very little to the FBI who confiscated the life savings of hundreds of people for this very reason. Ruiz was forced to produce documents proving his innocence and show the source of the money was legitimate in order to get it back. In other words, he was guilty until proven innocent.
But Ruiz was one of many people robbed by these agents. In total, these thieving FBI agents robbed 800 people of $86 million in cash, jewelry, and precious metals. Hundreds of those involved have contested the government-sanctioned theft and 65 of them have filed suit.
“It was a complete violation of my privacy,” Ruiz said. “They tried to discredit my character.”
According to the LA Times, “prosecutors, so far, have outlined past criminal convictions or pending charges against 11 box holders to justify the forfeitures. But in several other cases, court records show, the government’s rationale for claiming that the money and property it seized was tied to crime is no stronger than it was against Ruiz.”
The feds claimed that the other robbery victims were guilty for the mere ways the money was stored and how it smelled. If it was wrapped in rubber bands, it had to come from drug sales. If it smelled like drugs to the dog, the owner was guilty.
“The notion that the old rubber bands mean they must be drug dealers is ludicrous,” one of the victim’s lawyers, Benjamin Gluck said.
Gluck told the Times that U.S. Private Vaults customers “included many immigrant business owners who escaped repressive regimes where banks are unsafe and have collected amounts of cash as their life savings over many, many years.”
In other words, the FBI is robbing innocent people of their life savings and using bogus excuses to justify the theft.
Unfortunately, this entire 4th Amendment violation carried out by the FBI is considered legal under current US law. Despite most everyone whose valuables were stolen being innocent, the U.S. Attorney’s office said “nothing requires the government to ignore evidence of a crime that it sees” while taking inventory of seized goods.
And this is why in the last 30 years, the amount of “profit” stolen through civil asset forfeiture has skyrocketed.
According to the US Department of Justice, the value of asset forfeiture recoveries by US authorities from 1989-2010 was $12,667,612,066, increasing on average 19.5% per year.
In 2008, law enforcement took over $1.5 billion from the American public. While this number seems incredibly large, just a few years later, in 2014, that number tripled to nearly $4.5 billion.
When we examine these numbers, and their nearly exponential growth curve, it appears that police in America are getting really good at separating the citizen from their property — not just really good either, criminally good.
To put this number into perspective, according to the FBI, victims of burglary offenses suffered an estimated $3.9 billion in property losses in 2014.
That means that law enforcement in America, in 2014, stole $600,000,000 more from Americans than actual criminal burglars.
When government surpasses the criminal accomplishments of those they claim to protect you from, there is a serious problem. We’ve seen horrible instances of criminal cops and feds using this legal doctrine to rob everyone from grandmas to musicians, and in fact, we have even reported on cops stealing tens of thousands of dollars from an orphanage and a church. Seriously.
As TFTP reported at the time, to “keep society safe,” sheriff’s deputies in Muskogee County, Oklahoma robbed a church and an orphanage of $53,000. Real American heroes.
The good news is that Americans have been waking up to this Orwellian notion of police robbing the citizens, and they are taking a stand. Hopefully, the court finds this seizure illegal and puts these FBI agents in their place.
Connect with The Free Thought Project
https://truthcomestolight.com/fbi-robs-800-safety-deposit-boxes-steals-peoples-life-savings-claiming-cash-smelled-like-drugs/?utm_source=mailpoet&utm_medium=email&utm_campaign=new-posts-are-available-at-truth-comes-to-light_16
Thanks to: https://truthcomestolight.com

» The Clintons, The Red Cross & BOXES OF BILLIONS IN CASH
» Woman Finds $100,000.oo in Safety Deposit Box - Bank Grabs It! Official Government Spying - ID Sharing -
» I Spent My Life Savings On An Abandoned Ghost Town
» U. S. BANKS ARE CONTACTING PEOPLE AND OFFERING LIMO’S FOR PEOPLE AND ESCORT SERVICES AND WANTING THEM TO BE ABLE TO CASH IN TOMORROW MORNING.
» Australian State to Seize Savings, Homes, Driver’s Licenses of People With Unpaid COVID Fines