The Needle and the Damage Done

On July 13, the boy’s mother filed a report with the Vaccine Adverse Event Reporting System (VAERS) — run by the Food and Drug Administration (FDA) and the Centers for Disease Control and Prevention (CDC) — indicating her son died 27 days after receiving his second dose of Pfizer’s experimental COVID-19 vaccine in April.
“My son died, while taking his math class on Zoom. We are waiting for the autopsy because the doctors did not find anything,” the mother wrote. “He was a healthy boy, he had a good academic index, he wanted to be a civil engineer. He was the best thing in my life.”
In the “Diagnostic Lab Data” section of the VAERS entry, the mother wrote, “He had no previous symptoms. I was with him one hour before and my assistant saw him 20 minutes prior and he did not show any irregularities.”
Per the report, the child’s second dose was administered on April 3, and the boy died on April 27.
The entry also indicates that the child had not been diagnosed with any allergies, pre-existing conditions, illnesses, disabilities, or birth defects, and had not been taking any medications prior to his death. He apparently stayed in the hospital for eight days, and it’s unclear how he participated in the Zoom class, or if he was released prior.

Here is the information from National Vaccine Information Center with VAERS ID 1466009 from the 10/1/2021 release of VAERS data:

Feds say 195 Canadians dead after getting COVID shots
The feds have set aside a $75 million compensation fund, including payment of burial expenses, for people who passed away from the shot.

Posted by Lou on October 15, 2021
Posted in: Uncategorized. Leave a comment
https://www.blacklistednews.com/article/80974/deaths-following-vaccination-reported-in-taiwan-exceed-nations-covid-death.html

Since the onset of the COVID-19 pandemic, few nations have been lauded as much for their management of the disease as Taiwan has. Since the first cases of COVID-19 in the country were reported in February 2020, only 16,313 infections and 846 deaths have been recorded. Despite how successfully the nation had managed the outbreak, it still enrolled itself in the World Health Organization-led COVAX exchange program and began its first wave of vaccinations on March 22, 2021. While the nation hadn’t had even a dozen deaths attributed to COVID-19 by the time the first vaccine was administered, 836 of the 846 deaths attributed to COVID-19 have occurred since the vaccination program began. In an even more dubious display concerning the safety and effectiveness of the vaccines administered in Taiwan, the nation’s Central Epidemic Command Center (“CECC”) has stated that 850 deaths have been reported as adverse events following vaccinations. That total eclipses the number of fatalities attributed to the virus itself.
Taiwan’s vaccination campaign began much later than many other nations, a lag which many blame on political interference from China which was best illustrated by the island nation’s difficulties procuring orders of Pfizer-BioNTech’s mRNA vaccines. Despite these hurdles, the country was able to first able to procure 117,000 doses of AstraZeneca’s vaccines. Additional deliveries of 200,000 and 400,000 doses from the same manufacturer arrived the following two months before another 150,000 vaccines from Moderna were delivered in May 2021. It gave emergency approval to a domestically engineered alternative made by Medigen Vaccine Biologics Corporation with shipments from Pfizer-BioNTech and Johnson & Johnson soon following. As of October 11, 4.48 million Taiwanese, about 19% of the population, have been fully vaccinated and 13.7 million, or about 59% of population, have received on dose. The country has stated that it seeks to have 70% of its population fully vaccinated. 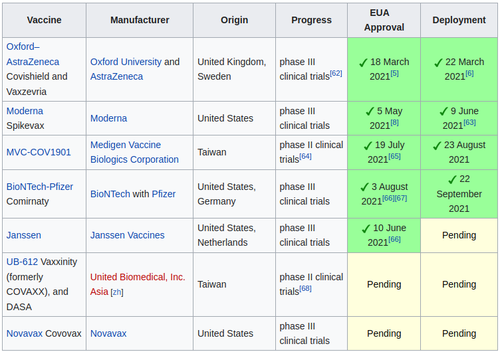 Yet, by the time Taiwan had approved those five vaccines for emergency use, an alarming trend began appearing. The highest seven-day average of new cases of COVID-19 observed in Taiwan before its first vaccines were deployed was just 3. By May 28, 2021, that seven-day average exploded to 597. As the rest of the world grappled with an increase in cases despite the global advancement of vaccination efforts, most those countries had record their all-time highs for new cases and deaths before any vaccines were available. One exception to that rule was seen in Israel, where the record for a highest single-day case count was recorded following the beginning of the nation’s campaign to administer third doses of the Pfizer-BioNTech vaccines in the wake of concerns of the delta variant’s impact of the efficacy of vaccines. Yet, even though Israel did surpass its previous one-day high, the amount by which it exceeded that paled in comparison to Taiwan. The seven-day average in Taiwan would not fall under 10 new cases again until September 2021. Since then, despite the increase in vaccinations, that national average has never managed to reach its pre-vaccination levels. The lowest seven-day average Taiwan has seen since it began vaccinating its citizens was recorded at 5 on September 5, 2021. 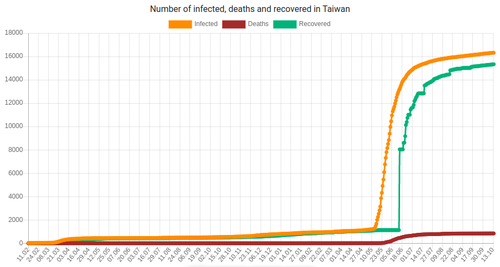 While the increase in viral transmission since March will likely be attributed to mutations like the delta variant, it could also be indicative of the antibody dependent enhancement onset from vaccines that has been forewarned about by scientists and physicians such as Dr. Robert Malone, one of the scientists behind the development of mRNA technology. Though not all vaccines used in Taiwan utilize mRNA technology, the viral vector-based vaccines like AstraZeneca’s still predicate their promotion of antibodies by exposing the immune system of vaccinated patients to the spike protein of SARS-CoV-2. Antibodies based on the genetic fragment of the spike protein alone opposed to a whole genetic sequence of a viral particle are suspected to be less capable of warding off infection. Scientists like Dr. Michael Yeadon, formerly of Pfizer, attest that these inadequate antibodies actually facilitate viral entry because they don’t possess the necessary protein structures, or paratopes, to the corresponding protein structures on the viral particles, called epitopes. This phenomenon was observed in clinical trials of mRNA vaccines aimed at combating the coronavirus which caused Middle Eastern Respiratory Syndrome. Advocates of that theory warning against that risk have expressed concerns that this same outcome of the potential deficiencies in COVID-19 vaccines has been overlooked by a hurried regulatory process.

As far as the 850 deaths reported to the Taiwanese CECC following vaccinations are concerned, 643 have been attributed to patients receiving AstraZeneca doses, 183 received Moderna doses, and just 22 received Taiwan’s own Medigen vaccine. Despite being recorded as adverse events following vaccination, many Taiwanese officials have responded to the CECC report by stating that these deaths may not be inherently due to the vaccines. The CECC has previously affirmed its position that reactions from the Moderna vaccine have resulted in fatal adverse events. As the seven-day average of COVID-19 deaths continues to hover between 0 and 1 as it has over the last several weeks, it’s possible that deaths reported to the Taiwanese CECC following vaccination will continue to exceed those attributed to viral infection for some time. 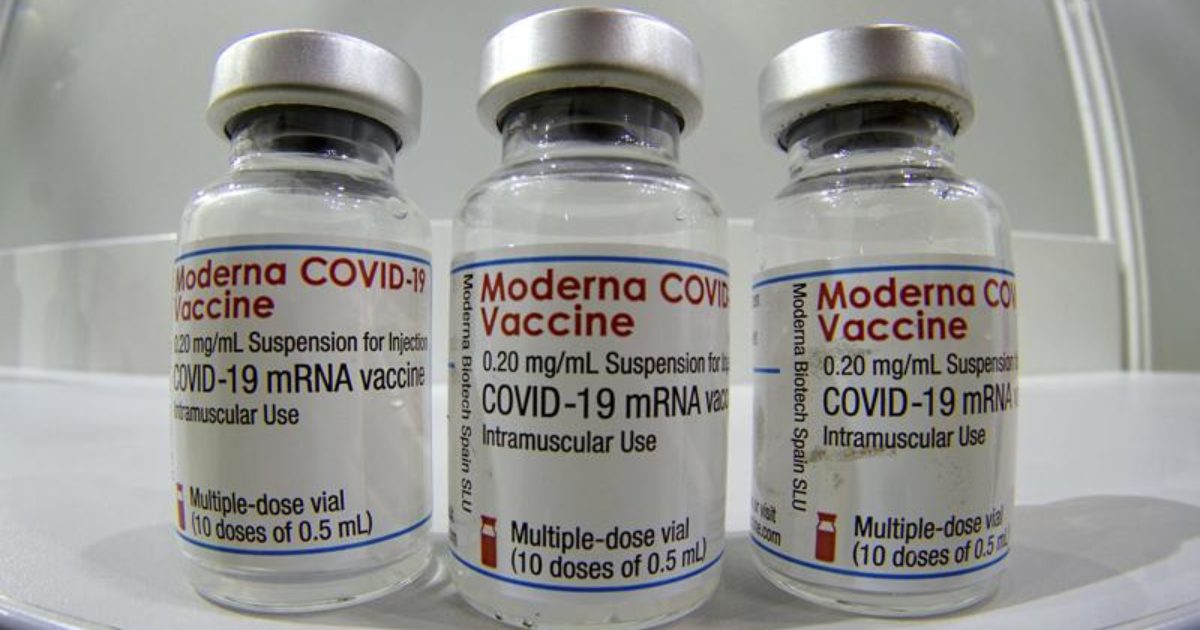 Check out the spin when vaccinated people die. And they are dying in droves.

In an effort to mitigate the damage done by the vaccinations, the media reports certain stories of those who get the death poke.
Recently I saw a story about 37-year-old Jessica Berg who died after reluctantly getting the vaccination. The school where her children attended required parent helpers to risk death. Berg’s love of children and Joe Biden’s mandate got her killed.
In the news story about Berg, a Biden administration medical hack commented that sadly the risk-reward should be in favor of getting vaccinated. Thus, he rationalizes the death of this beautiful young mother.
take our poll - story continues below

Now we get another such “love” story. This one involves a fully vaccinated Michigan couple. The two died from Wuflu within a minute of each other. And wait for it…they died holding hands.
According to Fox 17, Cal Dunham, 59, and his wife Linda Durham, 66, had preexisting health conditions and contracted COVID-19 during a camping trip, post-Wuflu shot.

Put another way, the shot that was to protect them did absolutely nothing. Well, that’s not totally true. The vaccine ruined their normal immune system. So when they contracted the disease they each had a more than 99 percent chance of surviving, they died.


The media now wants to make their death Camelot. These two are the new Romeo and Juliet of vaccine deaths.

Described by their surviving daughter Sarah Dunham, the Grand Rapids couple were churchgoing people and outdoors enthusiasts who put family first.
“The love that they found together after a previous marriage is fantastic,” Sarah Dunham told Fox 17. “They were the people that you just looked at and you were like, ‘I want to be old like that, I want that love when I’m that age.’”
“[My dad] called me before our family camping trip and said he wasn’t feeling good but he thinks it’s just like sinus, and [Linda] caught it and she’s like, ‘He gave me his cold,’” Sarah explained.
“The third day they woke me up and said, ‘We’ve got to go because we don’t feel well.’ So I packed them all up and they left,” she said.
A few days later, the couple was hospitalized and placed on ventilators.

People should be outraged. A vaccinated couple died, and the media (and Team Demento) regale us with romanticism.

On Monday, they were taken off life support and were pronounced dead, The New York Post reported. Cal Dunham died at 11:07 a.m., and Linda Dunham died less than a minute later. Both were noticeably holding hands.
There is nothing romantic about this double-murder. And don’t think for one second that they weren’t thinking of how they would likely be alive had they not taken the shot.
Moreover, you can bet they attended that event full of vaccinated people. So yes, they caught the Wuflu from a vaccinated super spreader.
I love this little disclaimer about the vaccines as they tout the “efficacies”.
No vaccines provide 100 percent protection against a virus; the Pfizer and Moderna vaccines show about a 95 percent efficacy rate against the coronavirus, and the Johnson & Johnson vaccine shows an overall efficacy rate of 77 percent.
No matter how you crunch it, those numbers just don’t add up to a reason to risk it all.