Source: Patty McMurray
Only moments ago, Rep. Thomas Massie (R-KY) tweeted: “Biden’s vaccine mandate is illegal, unconstitutional, unscientific, immoral, and hurtful,” adding, “But there’s another big reason it should be nullified immediately: More than half of the states oppose it already.”

Biden’s vaccine mandate is illegal, unconstitutional, unscientific, immoral, and hurtful. But there’s another big reason it should be nullified immediately: More than half of the states oppose it already.

Business Insider is reporting that more than half of the United States of America states are suing to stop Joe Biden’s authoritarian regime over their COVID jab mandate.

“This mandate is unconstitutional, unlawful, and unwise,” said a filing by a coalition of 11 states.

Business Insider – More than half of the states have cosigned four petitions, amounting to perhaps the most sweeping legal challenge to pandemic-era safety requirements since Biden took office. Three Democrat-led states are among the 26.
Latest: Gov. DeSantis Fired Up About Russiagate Hoax: “They Knew it was a Lie”
The lawsuits, filed in four federal appeals courts, take aim at Biden’s requirement that all companies with more than 100 employees mandate COVID-19 vaccines for their staff, or implement weekly testing.
The states said in the filing that Biden’s mandate “will cause injuries and hardship to working families, inflict economic disruption and staffing shortages on the states and private employers, and impose even greater strains on struggling labor markets and supply chains.”
Save up to 66% on MyPillow products. Use promo code FedUp and save up to 66%.
Biden’s mandate, which would affect about two of every three private-sector workers, was officially rolled out on Thursday. It is set to take effect on January 4.
The lawsuits argue that the federal government doesn’t have the constitutional authority to put a vaccine mandate in place. The Occupational Safety and Health Administration (OSHA) also lacks the statutory authority to enforce it, they say. The issue should be left to states to decide, they argue.

States like Michigan are facing unique challenges when it comes to fighting back against the wildly unpopular vaccine mandate. With a Republican majority Congress and far-left Democrat governor and attorney general, citizens are unsure of their financial future if they refuse to comply with the tyrannical demands of their employers. The frustration across the state is boiling over, as jobs and education are literally being threatened if workers and college students don’t comply and take the jab. Protests against vaccine mandates are a regular occurrence in front of businesses, health care facilities, and along the sides of busy highways in MI.
On Wednesday, only one day before Ford announced their overreaching vaccine mandate, employees and contractors working for General Motors, many of whom belong to unions, organized a huge protest against mandated vaccines in Warren, MI. Hundreds of GM employees and contract workers stood shoulder-to-shoulder in front of the General Motors Tech Center with homemade signs to protest the mandates.

On November 2, Congressman John Molenar introduced the No Vaccine Mandate Act in the House in an attempt to block OSHA’s order.

“President Biden’s arbitrary COVID vaccine mandate on businesses with 100 or more employees, burdens businesses with the responsibility to pay for expensive tests or force their employees to be vaccinated. There’s simply nothing in the Constitution that allows the federal government to impose this mandate on private businesses and my bill will cut off funding for the Department of Labor to enforce it. The American people simply disapprove of President Biden’s handling of the economy, and businesses are struggling with supply chain disruptions, labor shortages, and higher costs for gas and electricity. The last thing businesses need is the federal government burdening them with more costs and making it harder for them to retain and hire workers.” – CONGRESSMAN JOHN MOOLENAAR

Unfortunately, the bill will likely die when it hits the desk of Joe Biden’s obedient “yes” girl, Democrat Governor Gretchen Whitmer, who holds the record for one of the most incompetent responses to the CCP virus pandemic in America.
Yesterday, Rep. Thomas Massie (R-KY) announced that lawmakers on the federal level have a plan to abolish OSHA. Massie tweeted about the bill he introduced with several freedom-loving lawmakers to nullify OSHA, saying, “Any agency carrying out hurtful and unconstitutional acts on American people is an agency that needs to be abolished.”

ABOLISH OSHA. Any agency carrying out hurtful and unconstitutional acts on the American people is an agency that needs to be abolished. We introduced a bill this week to NULLIFY OSHA. #NOSHA @RepAndyBiggsAZ @RepMattGaetz @RepChipRoy @RepRalphNorman @RepScottPerry @RepMaryMiller 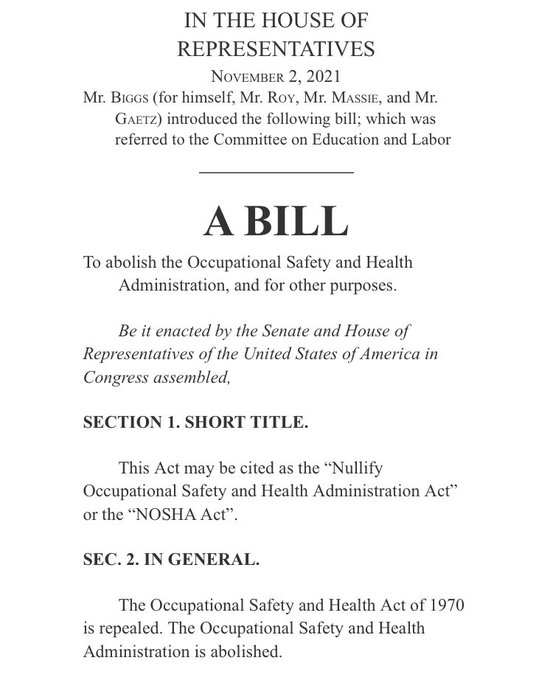 Suppose your state is not on this list. In that case, you need to start calling your governor, your state attorney general, and your state lawmakers to demand they fight back and protect you against the unconstitutional authority of the federal government to mandate the CCP virus jab.