OUT OF MIND » VOICES CARRY » JON RAPPOPORT » Football: Where Money Trumps “The Virus” by Jon Rappoport

Football: Where Money Trumps “The Virus” by Jon Rappoport 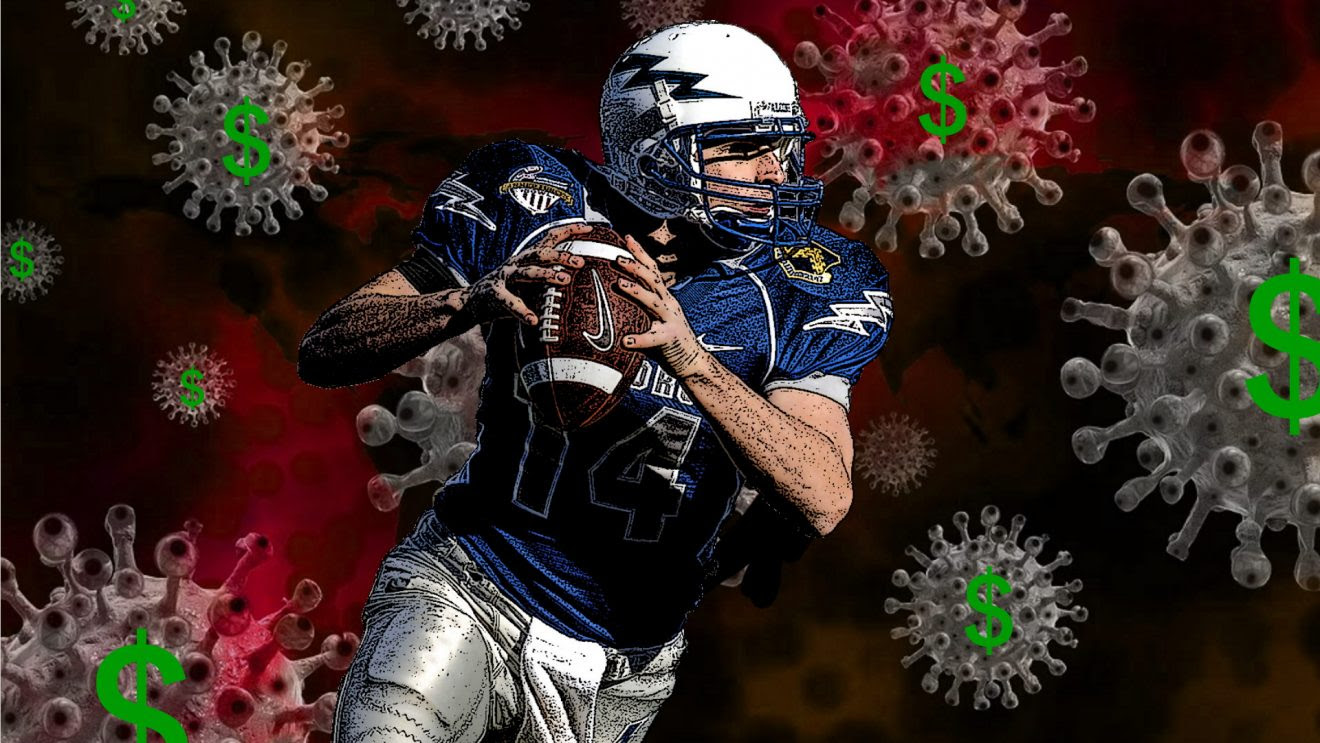 I wouldn’t ordinarily write about football; but the sport illustrates how vaunted Public Health Officials look the other way, when they’re supposed to. They have as much integrity as thieves in the night. Only idiots would pay attention to anything they say or claim or demand.
According to the government narrative, fully vaccinated people still spread “the virus.” That’s why, in many places, they’re supposed to wear masks.
Recently, Green Bay quarterback Aaron Rogers was mercilessly attacked for claiming he was vaccinated when he wasn’t; and for freely mingling with opposing team players after games and appearing before reporters without a mask.
Of course, no one mentioned that, DURING THE GAME, all players grab, breathe on, spit on, bleed on, pile on, scratch and claw one another. That’s permitted because it’s the source of MONEY. Lots of money.
And, in both college and pro games across the country, stadiums fill up with anywhere from 40,000 to 100,000 screaming, coughing, spitting, drinking, cursing fans, who sit cheek to jowl with one another. But that’s all right, too, because it’s MONEY.
This situation is pretty much like the US southern border, where thousands (millions?) of immigrants come into the US “with the virus.”
But that’s all right, too, because, well, it’s policy, one aspect of which is welcoming drugs into America. Drugs are MONEY. Big money.
Sports “journalists” don’t discuss what I’m writing about in this article. They’re not supposed to. It might turn off the audience. And yes, again, their audience is MONEY.
“Hey, Jim. Did you see what just happened down on the field during that last play? The big offensive left tackle bit the arm of the Rams linebacker. Blood is flowing. I wonder how much virus is being transmitted.”
“A ton, Frank. We really should have a graphic that illustrates it. Heck, there’s gobs of spit all over the field. So when a player falls down, he’s getting 100 percent pure from-the-lung SARS-CoV-2 rubbed in his face.”
“You and I are sitting in a veritable mist of virus engulfing the stadium.”
“That’s why your ex wants you to take out a bigger life insurance policy naming her as beneficiary.”
Where are the little prissy public health demons? Nowhere.
But they’ll tell YOU to take the highly destructive vaccine and then wear a mask and get ready for the boosters every six months and lock down and isolate whenever they deem it necessary.
They’ll collude with politicians to destroy all sorts of businesses and lives with these lockdowns.
But not the football business.
Despite his bitching and whining and moaning about crowds at large events, I assure you that if little Anthony Fauci suddenly ascended to the positon of Commissioner of the National Football League, he would find a way to keep the game going and the stadiums full of fans. He’d change his tune.
He’s the head of a public health mafia, and the mafia knows money.

OUT OF MIND » VOICES CARRY » JON RAPPOPORT » Football: Where Money Trumps “The Virus” by Jon Rappoport