Source: Nworeport
Bill Gates and Serum Institute CEO Adar Poonawalla accused in legal filing of being conspirators who knowingly pushed the unsafe COVID shot on the Indian population.
Murder charges have been filed against Bill Gates and the founder of the Serum Institute in a high court in India for their role in promoting the COVID vaccine, after a 23-year-old man died soon after taking the injection, according to reports.
From the Indian Bar Association:

Petitioner has sought prosecution of AstraZeneca’s (Covishield) manufacturer Bill Gates, his partner Adar Poonawalla and other Government officials and leaders involved in the murder of a 23 year old man, who lost his life because of vaccination. The deceased took the Covishield vaccine by believing in the false narrative that the vaccine is completely safe and also owing to the compliance requirement set by the Railways that only double vaccinated people would be allowed to travel.
The Government of India’s AEFI (Adverse Event Following Immunisation) Committee has recently admitted that the death of Dr.SnehalLunawat,was due to side effects of the Covishield vaccine. The said report has exposed the falsity of the claim made by vaccine syndicatethat vaccines are totally safe.
Petitioner has claimed Rs. 1000 crores ($ 134 million USD) compensation and has asked for interim compensation of Rs. 100 crores ($ 13.4 million USD).
Petitioner has also sought Lie Detector, Narco Analysis Test of accused Bill Gates and others.

The Serum Institute of India (SII) received funding last year from the Bill & Melinda Gates Foundation through the GAVI Alliance to conduct phase 2 and 3 testing of the Covishield vaccine in India, granted by the Drugs Controller General of India (DCGI).
“I would like to thank @BillGates, @gatesfoundation, @GaviSeth for this key partnership of risk sharing and manufacturing of a 100 million doses, which will also ensure equitable access at an affordable price to many countries around the world,” tweeted SII CEO Adar Poonawalla in August 2020.

I would like to thank @BillGates, @gatesfoundation, @GaviSeth for this key partnership of risk sharing and manufacturing of a 100 million doses, which will also ensure equitable access at an affordable price to many countries around the world. https://bit.ly/33CwY26 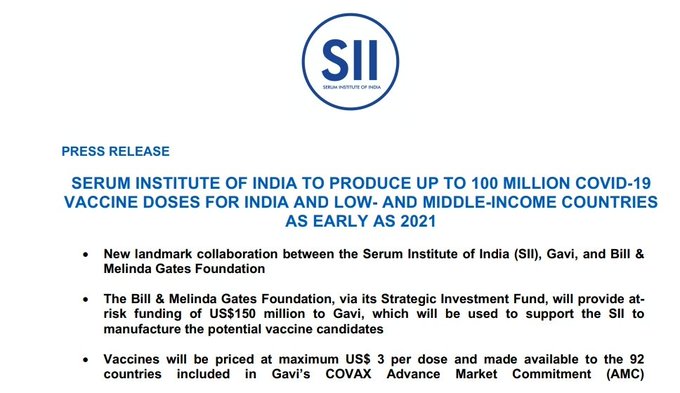 Notably, India’s National Adverse Event Following Immunisation (AEFI) admitted in October that the death of 33- year-old doctor Dr. Snehal Lunawat was due to a blood clot from the Covishield vaccine.
Hopefully, this is the first of many legal cases investigating the dangers of the experimental mRNA COVID shot and holding those who pushed it as “safe and effective” accountable.