Source: Kyle Becker
The FDA has recently admitted there is now major concern over another Pfizer product. It is now slapping a warning on a class of anti-inflammatory treatments called JAK inhibitors.
“The U.S. health regulator has added its strictest warning to the labels of drugs from Pfizer, Eli Lilly and AbbVie belonging to a class of anti-inflammatory treatments called JAK inhibitors, citing risk of serious health issues and death in patients 50 and over,” Reuters reported on Friday, citing the drug manufacturers.
“The addition of the warning on the labels follows the agency’s review of Pfizer’s Xeljanz after initial results from a February trial showed an increased risk of serious heart-related problems and cancer in some patients being treated with the drug,” the report added.
The alarming development is a reminder of the rushed approval of Pfizer’s “vaccine.” In June, the COVID-19 Vaccine Safety Technical (VaST) Work Group noted the adverse reaction in vaccinated males between the ages of 16 and 24. The development of the heart condition was observed in adolescents and young adults and was considerably higher after the second dose in males.
Rep. Thomas Massie noted that the Expected and Observed categories in VAERS diverged dramatically for Myocarditis and Pericarditis in the age groups ranging from 12 to 49.

Children and young adults are the least likely to suffer from COVID-19 and the most likely to experience myocarditis as a result of the vaccine. No one should be forced to take this vaccine. It’s especially wrong to force this vaccine on those who have recovered from the virus. 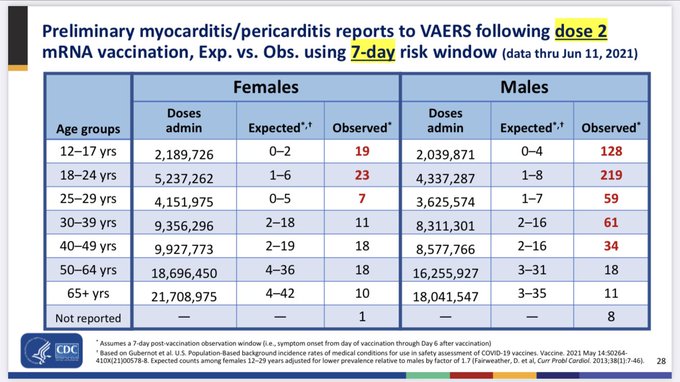 A retired cardiac surgeon recently circulated a warning to the AHA that heart inflammation markers are drastically increasing in patients in conjunction with increasing mRNA Covid vaccination rates.
The warning to the AHA is clear: “Patients had a 1 in 4 risk for severe problems after the vaccines, compared to 1 in 9 before.”
The controversial memo, which is a call for further research, has drawn a backlash among outlets attempting to control the narrative. But it has more corroboration than the mainstream media lets on.Advertisements
An NIH-hosted scientific publication explored the potential relationship between the mRNA ‘vaccines’ and heart inflammation reports in July 2021.
“As of 26 June 2021, a total of 322 million doses of vaccine were used, and thus far, 79 children aged 16 or 17 years, and 196 young adults aged 18–24 years have been confirmed by the CDC as having myocarditis/pericarditis following mRNA COVID-19 vaccination after analyzing data in the VAERS,” the paper points out.
“The adjusted risk ratio for myocarditis and pericarditis events in children and young adults between 16 and 24 years of age has been determined to be 0.94 (95% confidence interval 0.59–1.52). Because of this, the US FDA added a warning about risk of myopericarditis and pericarditis to the fact sheet of mRNA COVID-19 vaccines.”
“Recently, the US military reported 23 patients among 2.8 million doses of mRNA COVID-19 vaccine administered,” the paper continues. “While the observed number of myocarditis cases was small, the number was higher than expected among male military members after a second vaccine dose.”
“In a report from the Israeli Ministry of Health, one in 3000 to one in 6000 men aged 16–24 who received the mRNA COVID vaccine developed myocarditis and pericarditis,” it added. “Ninety percent of the cases in Israel appear to be men. Although the background rate of myocarditis in this population is high, the rate following vaccination appeared to be 5–25 times higher than the background rate.”
“The European Medicines Agency has also recently reported that myocarditis and pericarditis can occur in very rare cases following vaccination with COVID-19 vaccines Comirnaty [Pfizer-BioNTech] and Spikevax [Moderna].
“The Committee is therefore recommending listing myocarditis and pericarditis as new side effects in the product information for these vaccines, together with a warning to raise awareness among healthcare professionals and people taking these vaccines,” the article notes. “The European Medicine Agency’s safety committee (PRAC) has included 145 cases of myocarditis in the European Economic Area (EEA) among people who received Comirnaty and 19 cases following the use of Spikevax. As of 31 May 2021, around 177 million doses of Comirnaty and 20 million doses of Spikevax had been given in the EEA. As of end of May 2021, the incidence of myocarditis is 1 per million for both Comirnaty and Spikevax in the EEA.”
The data therefore call into question whether or not the CDC and FDA are being straight with the American people about the actual side effects, even as it has recommended that children as young as 5 years old get the shots. Indeed, President Biden has promised he will do everything in his power to make sure even children under 5 years old get the mRNA shots.
In 2009, Pfizer paid out a massive settlement over its fraudulent marketing of a drug.
“The pharmaceutical giant Pfizer agreed to pay $2.3 billion to settle civil and criminal allegations that it had illegally marketed its painkiller Bextra, which has been withdrawn,” the New York Times reported.Advertisements
“It was the largest health care fraud settlement and the largest criminal fine of any kind ever,” the Times noted.