Source: Paul Joseph Watson
Parents in the North Penn School District expressed outrage after a photo emerged showing a teacher forcibly taping a mask to a child’s face.
The school district confirmed that the incident happened after the photo went viral.
“Pro-mask or anti-mask, I hope we can all agree that taping masks to children’s faces crosses the LINE,” said a Facebook post by North Penn Stronger Together. “This was not a joke for the child or the parents.”


The district issued a swift apology, but refused to divulge the identity of the teacher in question.

The photo “taken in one of our classrooms last week and circulating on social media does not represent the universal values that the North Penn School District strives to instill in both our students and staff,” says the statement.
“After an immediate investigation, it was determined that while the incident was isolated and no malice was intended, the actions of the teacher were entirely inappropriate and unacceptable, no matter the context,” the statement read. “We understand that the act of taping a mask to a student’s face is concerning to many and apologize that it occurred.”
Parents are demanding that the district take immediate disciplinary action against the teacher.
“State authorities have no right to require masks after the Pennsylvania Supreme Court overruled the governor’s school mask mandate, but some school districts were authorized to keep the mandate,” reports Sputnik.
This is by no means an isolated incident.
As we highlighted last October, teachers at a Colorado Springs middle school forced children to tape masks to their face in what was described as an act of “child abuse.”

THREAD: Forcing kids to tape masks to their faces is CHILD ABUSE. It's happening in my backyard in Colorado Springs, according to one family. I spoke this morning with Stephanie M., mother of Rylee, a 6th grader at Chinook Trail Middle School in District 20, pictured here. /1 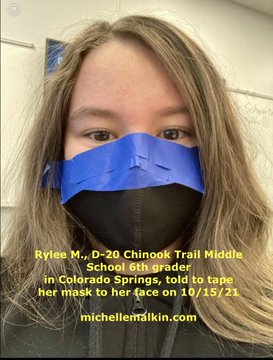 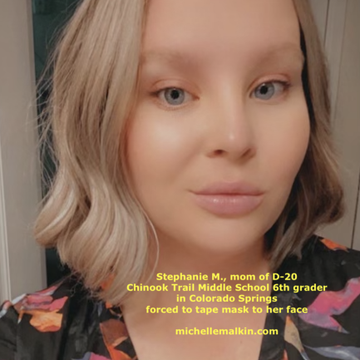 Children are also routinely forced to sit outside in the freezing cold for ‘snack and mask’ breaks.
Experts have warned that forcing children to wear face masks impairs learning and cognitive development.
As we previously highlighted, a study found that mean IQ scores of young children born during the pandemic have tumbled by as much as 22 points while verbal, motor and cognitive performance have all suffered as a result of lockdown and mask mandates.
A UK government investigation found that the evidence for the efficacy of face masks stopping the spread of COVID-19 in schools is “not conclusive.”