A Rare Judge in Canada Rules Against Forced COVID Injections of Children by Looking at the Evidence Rather than Listening to Government Tyrants Fri Mar 04, 2022 9:47 am 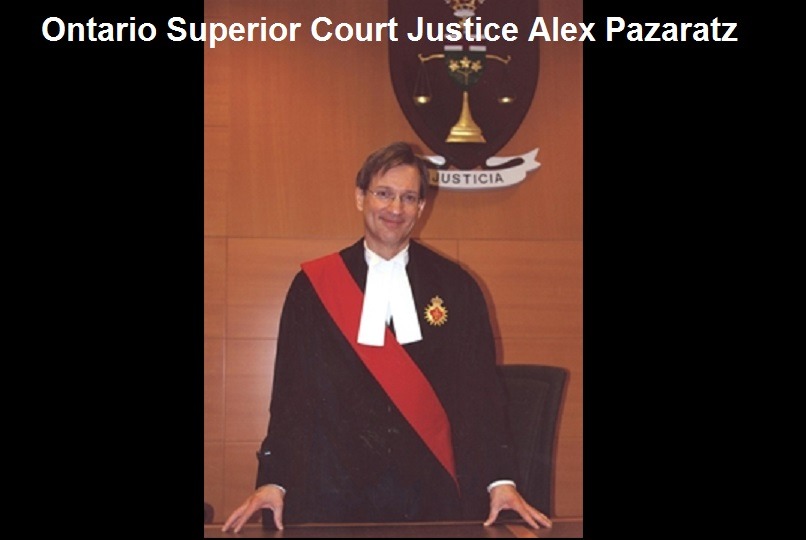 Comments by Brian Shilhavy
Editor, Health Impact News
In a very rare case, an Ontario Judge has actually ruled against a forced COVID vaccination for two children, ages 10 and 12, where a father was requesting that they be forced to receive the shots against their wish, and against the wish of their mother.
While this judge actually just simply did his job, which was to listen to the evidence that both sides presented before ruling, it made waves in the Canadian corporate media, because similar previous cases did not do that, but simply took the Government’s position regardless of what the facts were.
Global News reports:

An Ontario judge says he is not prepared to accept as fact that vaccinating children against COVID-19 is what’s best for them simply because it’s encouraged by the government, noting a number of factors – including the children’s own preferences – must be taken into account.
In a decision issued last week, Superior Court Justice Alex Pazaratz rejected a father’s motion to have his two younger children – ages 12 and 10 – vaccinated despite their mother’s and their own objections, and cautioned against dismissing certain viewpoints without evidence.
The ruling represents a departure from earlier Canadian cases involving disputes over COVID-19 vaccinations, where courts have taken what’s called “judicial notice” – essentially accepting statements as fact – that immunization is beneficial for children, said Alyssa Bach, an associate lawyer at Shulman & Partners LLP.
“We now have cases where judges have taken that judicial notice that the vaccine is in the best interest, and now one where it was decided that that wasn’t the case. And so it’s a reminder that each family’s circumstances, and the circumstances of the children, are going to be taken into consideration on a case-by-case basis,” she said Tuesday.
“It’s notable that Justice Pazaratz, in his decision, did go through the other cases where this judicial notice had been taken and distinguished it and how this case was different than the other cases.”
In most of the previous cases, the children were younger, so their views on COVID-19 shots were “either unascertainable or less relevant because of the child’s lack of maturity,” the judge wrote in his ruling.
And in the cases where the children’s preferences were overridden, the court found the parent seeking vaccination had presented more reasonable information to the children and made more compelling arguments in court, Pazaratz said.
As well, the court in many of those cases found the materials presented by the parent opposed to vaccination were “grossly deficient, unreliable and – at times – dubious. This lack of an equally credible counterpoint to government recommendations may well have been determinative in those earlier cases,” he said.
Not so in the case at hand, the judge noted.
Here, the parents, both in their mid-30s, separated more than seven years ago. The oldest, a 14-year-old boy, lives primarily with his father and chose to vaccinated against COVID-19 last fall – a decision both parents supported, the ruling says.
The two younger children, a 12-year-old girl and a 10-year-old boy, live primarily with their mother. Both were interviewed twice by a social worker and explained why they didn’t want to be vaccinated, with the youngest also expressing fears that his father would force him to get the shots, the document says.
The mother stressed she is not against vaccines overall, adding all three have received their regular immunizations, the ruling says. She also stated she would be open to having the younger two – who have already had the virus and recovered – get COVID-19 shots at a later date “if safety concerns can be better addressed,” it says.
Among the materials she submitted were a fact sheet issued by Pfizer, the drugmaker behind one of the main COVID-19 vaccines, and scientific papers, Pazaratz said.
The father, meanwhile, submitted fact sheets issued by the government and the Canadian Paediatric Society, as well as “numerous downloads” from the mother’s social media accounts on allegations she was promoting conspiracy theories, the ruling says.
“The mother’s evidence focused entirely on the medical and scientific issues. In contrast, the father focused extensively on labelling and discrediting the mother as a person, in a dismissive attempt to argue that her views aren’t worthy of consideration,” the judge said.
What’s more, he said, there is no evidence the mother has sought to impose her views on the children.
Pazaratz warned against allowing personal attacks, rather than debate based on evidence, into the judicial system.
He also cautioned against applying judicial notice in cases “where expert opinion is unclear or in dispute,” noting the government has historically been wrong on many issues, including the residential school system.
The judge further noted that health directives have “constantly changed” during the pandemic as new information emerged.
“This is not the kind of case where the court can say that either side is necessarily correct. Nor that the same determinations should apply for every child, no matter the circumstances,” he wrote.
“Anyone reading even some of the articles presented by the mother would likely conclude that these are complicated and evolving issues, and there can be no simplistic presumption that one side is right and that the other side is comprised of a bunch of crackpots. That’s why the court should require evidence rather than conclusory statements.”
The father, meanwhile, provided no evidence that the mother’s views had been debunked, the judge wrote. (Full article.)

Wow! Seeing actual justice practiced in a court of law regarding anything to do with COVID has become so rare, that it actually surprises you when it happens.
Comment on this article at HealthImpactNews.com.

» Federal Judge Rules Students Can Be FORCED To Get COVID Jab
» Member of Parliament in Finland Warns Government that They are Guilty of Genocide for Misleading Public on COVID-19 Injections
» GOVERNMENT IN IRELAND FORCED TO ADMIT THEY HAVE NO PROOF THAT COVID-19 EXISTS
» CDC UPDATE - 1,170 DEAD Following COVID Injections
» OFFICIAL GOVERNMENT OF CANADA DATA: TRIPLE VAXXED MORE THAN 5 TIMES LIKELY TO DIE OF COVID