Who Benefits From U.S. Government Claims That the UFO Threat Is Increasing ‘Exponentially’?

Who Benefits From U.S. Government Claims That the UFO Threat Is Increasing ‘Exponentially’? Wed Sep 07, 2022 10:11 am 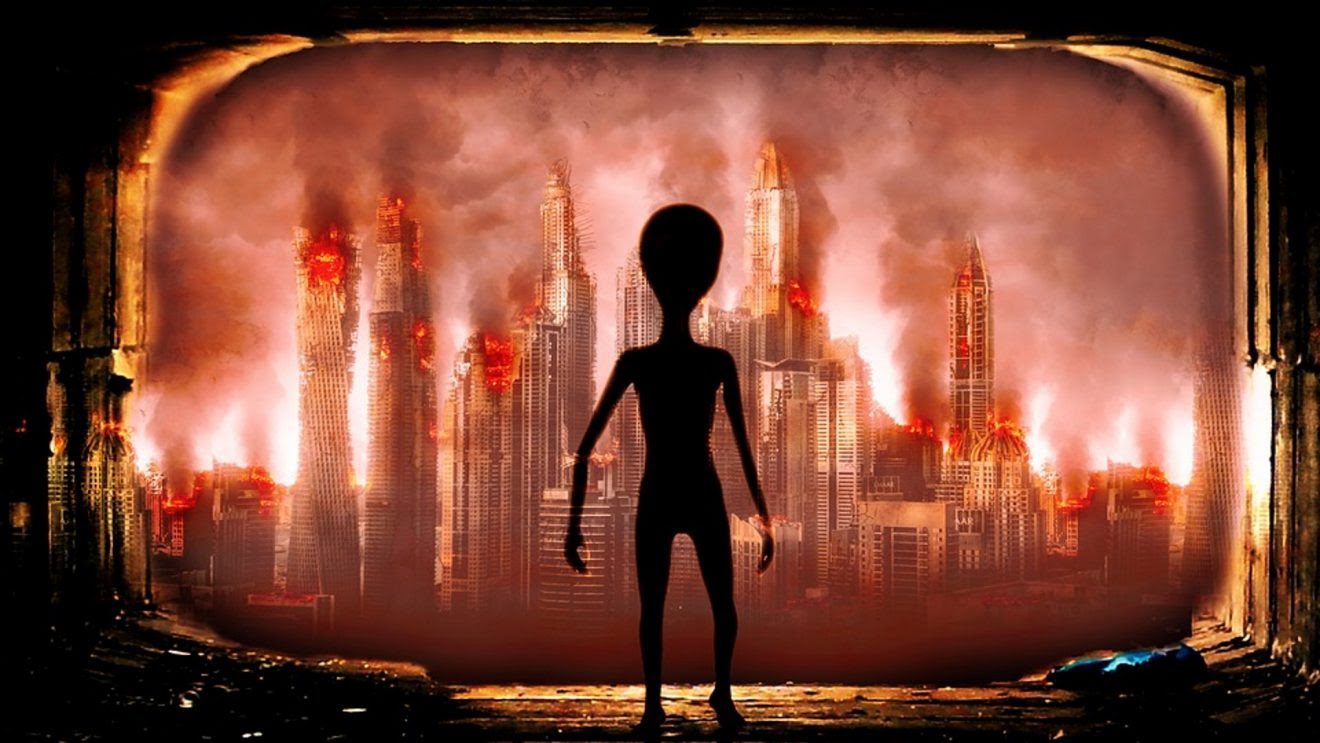 Who Benefits From U.S. Government Claims That the UFO Threat Is Increasing ‘Exponentially’?
by Caitlin Johnstone
September 6, 2022

A US senate report which is an addendum to the Intelligence Authorization Act for Fiscal Year 2023 has people talking due to the surprising statements it includes about the US government’s current position on UFOs.
I mean Unidentified Aerial Phenomena.
I mean Unidentified Aerospace-Undersea Phenomena.
This latest moniker for the thing we all still think of as UFOs is the US government’s way of addressing how these alleged appearances, which began entering mainstream attention in 2017, are said to be able to transition seamlessly from traveling through the air to moving underwater in what’s been labeled “cross-domain transmedium” movement. Because branches of the US war machine are roughly broken up into forces specializing in air, sea, land and space operations, the notion that these things move between those domains gets special attention.
UFO enthusiasts are largely focusing on a part of the addendum which oddly stipulates that the government’s newly named Unidentified Aerospace-Undersea Phenomena Joint Program Office shall not be looking into objects “that are positively identified as man-made,” because of the obvious implications of that phrase. This is understandable; if you’ve got a government office that’s responsible for investigating unidentified phenomena, you can just say it won’t be looking into phenomena that are “positively identified”. You wouldn’t have to add “identified as man-made” unless you had a specific reason for doing so.

After years of revelations about strange lights in the sky, first hand reports from Navy pilots about UFOs, and governmental investigations, Congress seems to have admitted something startling in print: it doesn’t believe all UFOs are “man-made.” https://t.co/LrNgDc3auH
— VICE News (@VICENews) August 23, 2022

But for me the claim that really jumps off the page, authored by Senate Select Committee on Intelligence Chairman Mark Warner, is the claim that these unidentified aerospace-undersea phenomena are a “threat” that is increasing “exponentially”.
“At a time when cross-domain transmedium threats to United States national security are expanding exponentially, the Committee is disappointed with the slow pace of DoD-led efforts to establish the office to address those threats,” Warner writes in the report.
“Exponentially” is a mighty strong word. Taken in its least literal sense, it means that threats to US national security from UFOs are increasing at an alarmingly rapid rate. That they have swiftly become much greater than they used to be.
What is the basis for this incendiary claim? What information are US lawmakers being given to make them draw such conclusions and make such assertions? There’s a long chain of information handling between an alleged UFO encounter and a US senator’s pen, and corruption can occur at any point in that chain (including the first and last link).
I remain comfortably agnostic about most aspects of the UFO question, up to and including the possibility that there are actual extraterrestrial or extradimensional beings zipping around our planet in technology our science cannot comprehend. But one thing I absolutely will take a hard and fast position on is that the moment the US government starts labeling something a “threat”, all trust and credulity must be immediately be thrown out the window.

This is after all occurring as the US enters a steadily escalating new cold war against both Russia and China, and we know that during the last cold war the CIA sought to exploit public panic about UFOs as a psychological weapon against the Soviets, and that the CIA has claimed that its newly developed spy planes were responsible for many UFO sightings in the 1950s, and that the US military was working on developing “flying saucer” aircraft during that same time. It also occurs after the assistant secretary of the Air Force for acquisition, technology and logistics stated at a 2020 conference that the Air Force has a brand new aircraft prototype, designed using new digital engineering technology, that has “broken a lot of records.”
This new mainstream UFO narrative also has highly suspicious origins, with key players ranging from shady US intelligence cartel operatives like Lue Elizondo and Christopher Mellon, to corrupt senator Harry Reid and his plutocratic campaign donor Robert Bigelow, to Blink-182’s Tom DeLonge, who believes humanity is being tormented by malevolent extraterrestrials who feed off negative human emotions and that the US military is heroically protecting us from their evil agendas. Filmmaker Steven Greenstreet put out a short, well-sourced documentary with The New York Post this past May laying out copious amounts of evidence that the groundwork for the new UFO narrative was built on journalistic malpractice and negligence, obfuscation, omission, and outright lies. The footage we’re being shown of these supposed vehicles to justify this new narrative consist of blurs, flashes and smudges which can all be explained by mundane phenomena.
So in my opinion this isn’t a subject we can just ignore, as weird and uncomfortable as the subject of UFOs might be for serious analysts. Whatever the subject, when you’ve got the US government claiming on highly suspect grounds that there’s an exponentially growing threat that urgently needs to be addressed militarily, it’s time to sit up and start paying attention.

Not that I myself have any clear idea of what’s going on here beyond the distinct impression that we are being deceived about something potentially very important. And I don’t get the impression that other people have a very clear picture of what’s going on either.
Some say this is just a scam to get more funding for the Space Force or the military in general. That could very well be, but as far as publicly available information goes we’re not seeing anyone saying anything like “Hey we need $40 billion to address this UFO problem.”
Some say this is part of an agenda to justify getting weapons into space, but I suspect anyone likely to support that agenda would support it with or without the claim that we need to fight ET. And again, there’s the problem that nobody’s saying “Hey we need to get weapons into space because of UFOs.”
Some say this is just a deliberate “distraction” designed to keep people from focusing on more important issues, but the problem there is that (A) the empire doesn’t normally roll out distractions in that way, and (B) the UFO issue isn’t getting much mainstream attention. It’s a peripheral story, dwarfed in comparison to real propaganda initiatives like Ukraine.
Some say there’s a conspiracy to use high-tech weaponry to create a false flag alien invasion and unite humanity under a one world government, but that’s a fairly mainstream idea that’s being pushed on viral Netflix films by known fraud Steven Greer. I think the world is paranoid enough at this point that few would buy such a psyop even if it were somehow convincingly orchestrated.
Some say this narrative is all a cover for new technology the empire is keeping under wraps, presenting an official position that the US government has nothing to do with the strange vehicles people are seeing in the air as stated in the ODNI’s report on UFOs last year. That would certainly explain the empire’s cockiness in confronting Russia and China simultaneously when public knowledge of its economic and military capabilities would indicate that that’s a bad idea.
It could be as simple as the fact that once it becomes the established orthodoxy in Washington that UFOs are a threat and something needs to be done about them, it’s a safe bet that we’re going to see massive amounts of money moving around to deal with that threat and the emergence of war machinery that can be used in future confrontations with Russia and China. There are any number of creatures lurking in DC who would stand to benefit from that happening, and would stand to benefit from pushing that agenda. It’s possible that contracts have already been signed. It’s possible that finances have already been allocated for it from the war machine’s dark money slush fund, and that all this public talk is just narrative management to preemptively justify that spending when information about it comes out.
Or maybe it’s some mixture of these things, or none of them. I don’t know. I do know that someone’s benefitting from all this. And I know it’s unreasonable to expect the most murderous and tyrannical regime on earth to tell us the truth about UFOs when it would stand nothing to gain by doing so, and we ordinary people should therefore do our best to understand what’s happening for ourselves.
I think it would be good if people on the anti-empire fringes of the spectrum started looking at this thing more and describing what they’re seeing, even though it’s impossible to see everything behind the walls of government opacity. Otherwise the only people looking at it will be UFO enthusiasts who just want “disclosure” at any cost, and the operatives of the empire itself.

» FBI Document Claims US Government Brought Down Extraterrestrial Craft With Bodies Inside
» Truth is an existential threat to the (impostors…impersonating lawful officers of the ) US government
» Breaking: Fifth Largest Life Insurance Company in the US Paid Out 163% More for Deaths of Working People Ages 18-64 in 2021. Total Claims/Benefits Up $6 Billion
» Candidate claims to be a 'government psychic'
» US GOVERNMENT CLAIMS 100% OWNERSHIP OVER ALL YOUR DNA AND REPRODUCTIVE RIGHTS