OUT OF MIND » THE INSANITY OF REALITY » GLOBAL FOOD CRISIS » Eggs, flour and tires: The prices going up the most and why

Eggs, flour and tires: The prices going up the most and why

Posted BY: RM | NwoReport
A hotter-than-expected inflation report this week pummeled the stock market and punctured hopes of relief for strained households.
New government data showed that prices rose slightly in August, worsening the cost woes for consumers as the Federal Reserve readies to decide on another interest rate hike next week.
While prices are rising in nearly every sector, some products have experienced more significant price spikes than others.
At the grocery store, for instance, price leaps vary considerably . The price of eggs is up nearly 40% from where it stood last August; while the price for margarine trails close behind, having jumped 38% over that time, according to the consumer price index released by the Bureau of Labor Statistics. 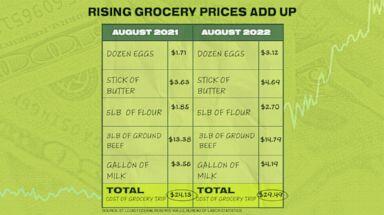 ABC News Photo Illustration – PHOTO: Rising Grocery Prices Add Up
The price of pork chops, however, rose little more than 5% since last August; and the price of tomatoes even inched downward over that period.

“We’re getting to a point where a lot of things are coming back into balance now,” Omar Sharif, founder and president of research firm Inflation Insights, told ABC News. MORE: Here’s why food prices are so high and what you can do about it
Still, many prices continue to climb sharply, since businesses face a host of heightened costs tied to supply chain disruptions, labor shortages and distribution costs, he said.
“We haven’t been in a situation in a long time where the entire cost structure of operating your business has gone up at the same time,” Sharif said. “Given the inflationary environment, it’s a lot easier to pass these costs along to your consumers.” MORE: Consumer prices rise unexpectedly in August, sending stock market tumbling
Here’s what you need to know about which prices are going up the most and why:

Those who took a flight over the summer know that airfare prices have skyrocketed. Airline fares have jumped 33% since last August, which far outpaces the overall year-over-year inflation rate of 8.3%.
The steep increase in prices owes to the release of pent up demand from the pandemic, when people across the globe isolated in their homes and forwent travel. That leap in demand has collided with a shrunken supply, Sharif said, noting a pilot shortage this year that has reduced the flight capacity of airlines to roughly 80%.
“Post-omicron bookings this year have skyrocketed,” he said. “It’s one thing if you don’t have enough baggage handlers. It’s another if you don’t have enough pilots.”
Travelers have received some small relief, however. Between July and August, the pace of prices for airfare actually fell by about 4.5%. 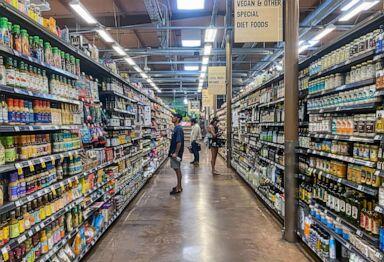 Apu Gomes/AFP via Getty Images – PHOTO: People shop at a supermarket in Santa Monica, California, on September 13, 2022.
Still, other prices in transportation and transportation-related goods have risen sharply over the past year. The cost of public transportation is up more than 20% since last August; and the price of tires over that time rose nearly 14%. MORE: Biden, ahead of midterms, hosts White House celebration of ‘Inflation Reduction Act’

Despite a sustained drop in gas prices over recent months, the cost of gas remains about 25% higher than it was a year ago.
The cost at the pump for diesel fuel has worsened even further over the last year. A category of prices called “other motor fuels” – which includes diesel and alternatives like ethanol – skyrocketed 53% since last August.
Diesel prices are especially important because they push prices upward in industries across the economy that rely on diesel trucks for the distribution of their products, said Sharif.
“It’s costly to move stuff across the country,” he said.
Gas prices have fallen in recent months amid a drop in demand from the summer peak and a decline in crude oil prices.
But the price of gas remains elevated due in part to the Russian invasion of Ukraine , which prompted a widespread industry exit from Russia that has pushed millions of barrels of oil off the market.
Meanwhile, a longstanding oil supply shortage endures from a pandemic-induced production slowdown that hasn’t caught up with the bounce back in demand as people have returned to many of their pre-pandemic activities. MORE: US rent prices finally showing signs of cooling down

It doesn’t take a sleuth at the grocery store to find sky-high prices . But some sticker shocks delivers a stronger blow than others.
As mentioned, the prices of eggs and margarine have risen dramatically. The costs of other breakfast items have also spiked. The price of roasted coffee is up almost 19% over a year prior; while the price of milk has jumped 17% over that time.
The price of flour, meanwhile, has leapt a staggering 23% since last August, sending prices up for desserts and other baked goods.
The cost increases don’t stop at products meant to be consumed by human beings. The price of pet food has gone up 13% since a year ago.

OUT OF MIND » THE INSANITY OF REALITY » GLOBAL FOOD CRISIS » Eggs, flour and tires: The prices going up the most and why

» Simple Flour Based Recipes For Your Survival Kit
» Eggs Will be $12 a Dozen; Meat Shortages Coming This August
» Did he really find Dinosaur Eggs?
» Carrots, eggs or coffee: Which are you?
» Beach littered With Thousands Of Snail Eggs