We Have Our First Look at Neptune's Rings in 33 Years, And They're Glorious

The first picture of Neptune to be taken by NASA's James Webb Space Telescope reveals the latest, greatest details of the ice giant's atmosphere, moons, and rings in infrared wavelengths.

Some of those details – for example, faint bands of dust that encircle Neptune – haven't been brought to light since the Voyager 2 probe zoomed past in 1989.
"It has been three decades since we last saw those faint, dusty bands, and this is the first time we've seen them in the infrared," astronomer Heidi Hammel, an interdisciplinary scientist on the JWST team who specializes in Neptune, said today (Sept. 21) in a news release. Neptune's brighter rings stand out even more clearly.
In visible-light pictures, Neptune shows up as a deep blue dot, thanks to the methane in its atmosphere. But the image from JWST's Near-Infrared Camera, or NIRCam, casts the planet's disk in pearly tones of white. High-altitude clouds of methane ice appear as bright streaks and spots.
A continuous band of high-latitude clouds can be seen surrounding the vortex at Neptune's south pole.

There's also a thin line of brightness at the equator, which the JWST team says could be a visual signature of the global atmospheric circulation that powers Neptune's winds and storms. That warm stream glows more brightly in infrared wavelengths.
The full picture shows seven of Neptune's 14 known moons, including a sparkling point of light that is Neptune's largest moon, Triton. (Astronomers suspect that Triton is actually an icy world from the solar system's Kuiper Belt that was captured by Neptune's gravitational field.) 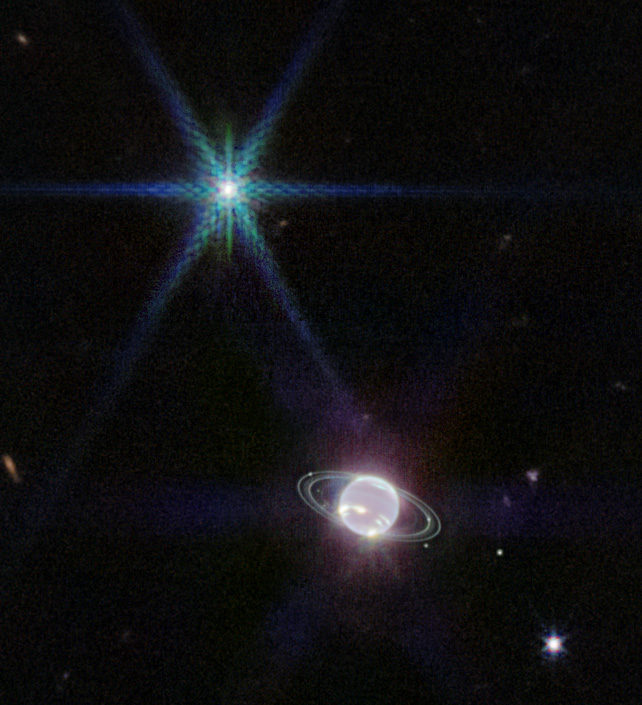 The Neptune system. In the upper-left is Neptune moon's Triton, sporting Webb's distinctive eight diffraction spikes, an artifact of the telescope's structure. (NASA, ESA, CSA, STScI; Joseph DePasquale (STScI))
JWST's infrared imagers are optimized to look at the frontiers of the cosmos – including extremely redshifted objects near the edge of the observable Universe.

Infrared detectors are also well-suited for looking within dusty nebulas and analyzing the atmospheres of alien planets.
But as the images released today illustrate, JWST can also produce fresh views of the celestial objects within our own Solar System.
Last month, astronomers unveiled the telescope's first pictures of Jupiter as well as its polar auroras and faint rings.
And this month, JWST captured its first images and spectral data from Mars.
It's been eight months since the 6-ton telescope arrived at its observation point, a million miles from Earth, and astronomers have been wowed by the results so far.
There have also been glitches to deal with, and unlike the Hubble Space Telescope in its heyday, there's no way for a repair team to make a service call.
The most recent issue involves increased friction in one of the mechanisms for JWST's Mid-Infrared Instrument, or MIRI. Because of the snag, the JWST team has paused MIRI's observations in its medium-resolution spectroscopy mode until an adequate solution is found.
Looking on the bright side, MIRI can still make observations in other modes, and NIRCam – the instrument that captured the telescope's view of Neptune – isn't affected by the glitch.

This article was originally published by Universe Today. Read the original article.