Protests in China over President Xi Jinping’s zero-tolerance Covid-19 measures have intensified – expanding from Beijing and the far western Xinjiang region to several other major cities, including Wuhan, Shanghai, and the eastern city of Nanjing, according to video and photos circulating on social media.
The weekend protests followed Friday demonstrations in Urumqi, the capital of Xinjiang after a deadly fire killed residents locked inside following lockdowns that lasted more than 100 days. Officials have reported 10 deaths in the fire, however, citizens have reported up to 40 who perished.

The protests are a rare display from a typically compliant citizenry, who know that crackdowns on dissent have intensified over the past decade. As the Wall Street Journal notes, ” Having protests over the same issue break out in multiple Chinese cities is almost unheard of, outside of nationalist outpourings, such as anti-Japanese protests.”

Since the Tiananmen Square protests in 1989, the ruling party has allowed some local demonstrations, but made it a priority to prevent nationwide protests.
On Saturday, videos circulating on social media showed crowds gathering on a street in central Shanghai calling for a lifting of lockdowns. The videos were verified by Storyful, a social-media research company owned by News Corp, parent company of The Wall Street Journal. -WSJ 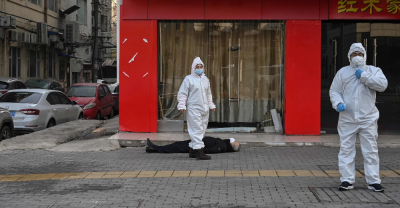 
It was a tiny incident, not captured by TV cameras, nor did it make headlines across the world. But it suggested a seismic shift in attitudes. The men in white hazmat suits, (the Big Whites as they are known as or da bai in Mandarin) had come to lock down a building of about 100 residents in northern Beijing.
It was close to 5pm on Sunday. The Big Whites erected steel barriers and were about to cordon off the 26-floor structure with a large metal fence. Then the women came out. They were a group of mothers of small children and residents of the building. They berated the officials, shouting at them.
Security guards hurriedly arrived and menacingly took up position. Everyone expected the women to back down, accept the lockdown, be arrested or at least cautioned. Those who challenge authority in China normally pay a heavy price. But the women stood their ground. Shouts and insults were exchanged. And then incredibly the men in white suits took down the barriers and left.
The security guards also left. People on the street who were queuing for Covid tests witnessed the incident and applauded the outcome. China is changing socially as well as economically.
The miracle that has transformed the country’s fortunes over the past four decades was due in large part to local-level policy innovation and experimentation.
Beijing unleashed the hounds of capitalism and let the provinces get on with the job. Growth was the priority. President Xi Jinping changed that. His priority and the party’s since he came to office in 2012 was enhancing the party’s position. He believed that great prosperity gave people greater choice and the party position would, consequently, be undermined. People with financial security do not need to follow party manifestos or doff their caps to officials.
Even before COVID broke in early 2020 Xi had implemented measures to curtail GDP growth that was then about 6 per cent. Then Covid hit and Xi shut down Wuhan city, the scene of the first mass outbreak, with 11 million people.
.
This it must be stressed met with initial public acclaim. But Xi’s zero-covid policy was political and not health based. People quickly tired of it. Shunning the introduction of more effective Western vaccines, Xi allowed the elderly to avoid vaccination and claims, wrongly, that the Omicron variant is as lethal as the initial outbreak. It isn’t.
.
The health sector in China has been ravished by corruption. Exposing it to the harsh spotlight of extensive media coverage would raise questions about its financing or more pertinent, lack of investment even though billions of dollars have been allocated to the sector. Even a cursory visit to any state hospital would show the chronic lack of investment in what is, after all, still a communist country.
It is worth bearing in mind that Covid cases in China, a country of 1.4 billion people, barely record a blip on the radar.  According to official figures 5,200 have died since the pandemic began.
That works out at about three Covid deaths in every million. It is 3,000 per million in the US and 2,400 per million in the UK. It must also be pointed out that not all Covid-positive fatalities were caused by Covid but it still gives an indication of the likely numbers.
Beijing is not threatened by sporadic unrest. It has immense firepower and other measures to deal with protest. Covid restrictions will remain as the loss of face in reducing them would carry a heavy political price.
But something has changed. Xi is no longer considered beyond reproach. His policies are facing higher scrutiny in the public arena. Since Mao’s death China has been on a journey. During those tumultuous decades the party has broadly enjoyed public support under the promise of a better and wealthier tomorrow. The Chinese now fear they are being short changed.
The women who protested on Sunday gave voice to frustrations shared by millions.
*
Note to readers: Please click the share buttons above or below. Follow us on Instagram and Twitter and subscribe to our Telegram Channel. Feel free to repost and share widely Global Research articles.
Geopolitical analyst Tom Clifford reporting from Beijing. He is a regular contributor to Global Research.
Featured image is from FAIR
The original source of this article is Global Research
Copyright