OUT OF MIND » BREAKING NEWS & HOT TOPICS » THE GREAT DIE OFF » Well they did it! New Zealand took away that baby because parents wanted unvaxxed blood for transfusion.

Well they did it! New Zealand took away that baby because parents wanted unvaxxed blood for transfusion.

Well they did it! New Zealand took away that baby because parents wanted unvaxxed blood for transfusion. Thu Dec 08, 2022 12:48 pm 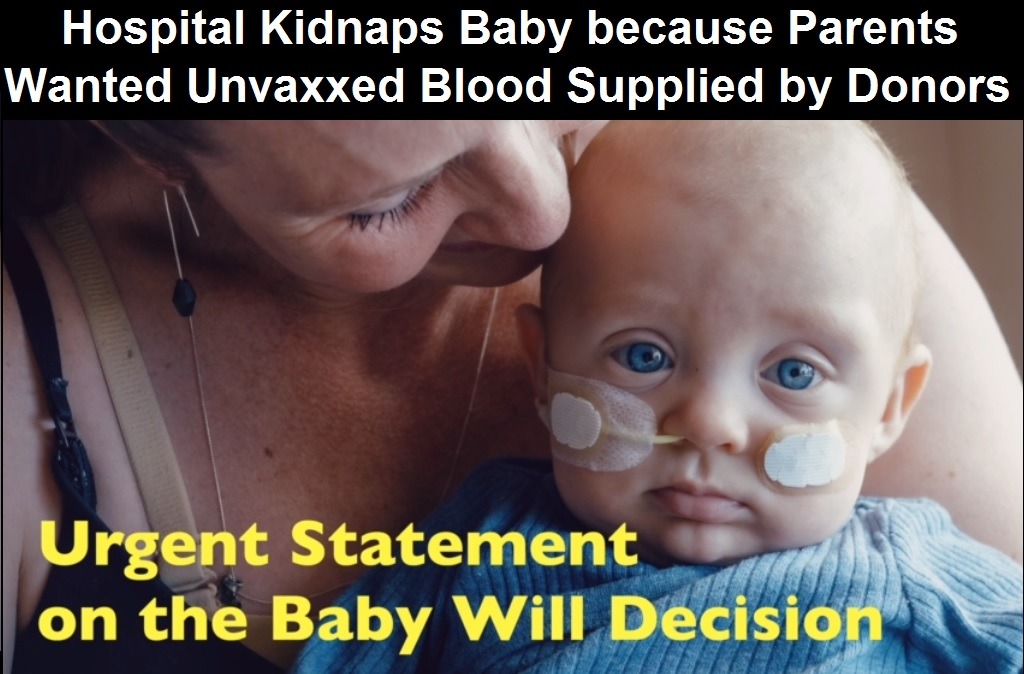 
A court decision in New Zealand today allowed a hospital to take custody of a 4-month-old baby simply because the parents wanted the hospital to use blood from their own donors who have not been vaccinated with mRNA shots for a heart surgery procedure.
See our original report on this tragic story:

Former TV news reporter, Liz Gunn, who is with FreeNZ Media and has apparently been the only one giving the parents’ side of the story, gave a brief update shortly after the court’s decision.

She later posted a longer video with an interview with Sue Grey, the parents’ attorney.

I have been covering “medical kidnapping” for over a decade now, and this story is a frightening warning about the world we now live in post COVID-19, where science and facts are meaningless, and being on the correct side of a political issue is all that matters.
So called “courts of law” all over the world now have ruled in favor of medical authorities, not based on evidence and facts, but based on political correctness. We have seen this in the U.S. where even the Supreme Court has upheld rulings on vaccine mandates, such as the one in New York City, where sports players and entertainers were exempt from COVID-19 vaccine mandates, but city employees, such as police, firemen, sanitation workers, etc., were not exempted.
These parents in New Zealand did not refuse medical treatment nor their doctors’ advice, according to their own testimony, but simply wanted to have unvaccinated blood supplied by approved pediatric donors.
The doctors disagreed, saying that vaccinated blood is perfectly safe, and in the end the parents apparently lost custody of their baby simply because they were labeled as “conspiracy theorists” and dared to disagree with the doctors.
The message these medical tyrants are sending to the rest of the world is very clear: Obey us or we will take your children away from you.
But there will be justice. Justice is coming…

Give us aid against the enemy, for the help of man is worthless. With God we will gain the victory, and he will trample down our enemies. (Psalms 108:12-13)
He will judge the nations, heaping up the dead and crushing the rulers of the whole earth. (Psalms 110:6)

OUT OF MIND » BREAKING NEWS & HOT TOPICS » THE GREAT DIE OFF » Well they did it! New Zealand took away that baby because parents wanted unvaxxed blood for transfusion.

» TRANSFUSION CONFUSION: American Red Cross caught mixing vaxxed blood with unvaxxed blood
» It was only a matter of time: “Vaccinated Blood” Transfusion Deaths
» New Zealand PM Brags About Making Unvaxxed People Second-Class Citizens as Part of Push to Get Covid Jab
» Baby Will is out of hospital and in the care of his parents
» UPDATE ~ Baby of Parents Who Declined Birth Certificate Still Not Returned in Alabama