While the world is wrestling with
the ethics of drone warfare, giant, featureless rectangles are appearing
in the sky. The ominous platforms are completely silent and some have
hovered over towns. Below their hovering bulk people quake with fear and
awe.

The technology has the ability to
be armed. If they are advanced stealth drones, the original drones were
deployed only to track movement on the ground. Now many are being armed
with missiles. Black projects do not have to remain defenseless.

The SR-71 was once a black
project. It remained a spy plane, but its successor technologies from
Lockheed and Boeing were the stealth fighter and bomber, respectively.
Both are armed to the teeth.

Extrapolating on the use of this
technology, it’s easy to see it could be weaponized in the future. All
drones are potential ‘death platforms.’ The unsettling truth is the U.S.
intention to have more than 20,000 drones in American skies before 2030
threatens more than it protects.

What
are these flying juggernauts? UFO archives have no record of them. The
closest unidentified flying objects seasoned researchers can find that
match up with the mystery rectangles are the rare diamond-shaped UFOs
seen during the 1960s and 1970s over Italy and the Canary Islands north
of the African coast. 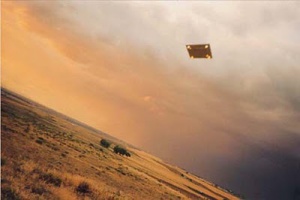 Some
investigators speculate the unnerving craft are not piloted by
extraterrestrial intelligence–in fact, they may not be piloted at all.
They could be advanced black project drones directed from secret
installations located in one or more facilities within U.S. Air Force
bases.

A report made to the Mutual UFO Network by a Texas couple adds to the growing data about the strange sky craft. The website io9.com shared the MUFON summary of a rectangular UFO spotted between Hutto and Taylor, Texas:

“A rectangular UFO was sighted by me near Hutto, Texas…It was very large and perfectly rectangular, grayish-black in color hovering below the storm clouds like a huge banner. 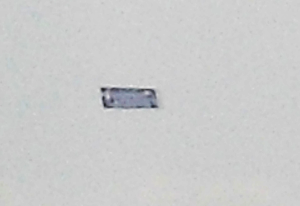 “I
was driving toward Taylor, Texas on Hi-Way 79 going east. It was the
size of a football field in my opinion. Moving as fast as I was driving
at 55 miles per hour going parallel to it. I watched it for almost five
minutes in disbelief. Then I took action and took the very next road to
intersect with it and it just disappeared!

“This
is the second UFO that I have seen in my life time. The other was in
1973 and it was hovering over the Decker Lake Power Plant near Austin,
Texas. What a sight seeing it going zig zag across the sky then stopping
for about five minutes to recharge then off it went at a blink of an
eye it was gone.

“My wife [name withheld by SW/LITS] witness[ed] it with me too and went to get a camera and it was gone.” 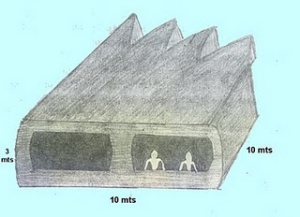 Rectangles south of the border

Although
the rectangular have been spotted across the USA and Canada, some have
been seen far south of the border. Segundo Hernán Godoy López, a
50-year-old technician, experienced a stunning encounter with a radical
rectangular UFO during 2008 in Santiago, Chile that—he claims—appeared to be piloted by humanoids.

This
report, while appearing credible, may be exaggerated as these type of
craft seem designed more for black ops surveillence and are likely
remote-controlled. Although from his drawing, the configuration is not
quite a true rectangle craft.

Yet, according to López’s testimony, as related by Inexplicata,
“The windows were completely black. At the window on the right, he
could see two humanoid figures down to their waistlines. They were thin,
grey and featureless.

“The
color of their bodies was very light grey and both creatures could be
clearly seen in the rectangle, one beside the other. Their arms rested
against the lower part of the frame, and they made clumsy sideways
moves, as if looking for something in unison. It seemed as if they were
looking at the landscape.

“At
no time did the witness hear anything, but at one moment, when he tried
to alert his co-workers in the lower floor, he found himself unable to
move. He could only move his eyes. He claims not having felt any sense
of despair or fear, and he stood up to the situation. He felt an
increase in atmospheric pressure, and says his body was ‘pressured’ and
he felt dense—a
situation that lasted until the object pulled away some 10 meters from
where he worked. At that point he felt normalcy returning to the
surroundings.

“The
object continued moving in a straight line and slowly. He managed to
see that it lacked wings or other appendages. It was simply rectangular
and nearly square around its base, which he calculated at some 3 meters
tall. Mr. López, adds that he suffered no damage to his skin, body or
mind. Aside from the momentary paralysis, he had no vision problems as a
result of the experience. He figures that the entire experience lasted
some 15 minutes from the start of the observation. He describes the
experience as the most interesting he’s had in his life.” 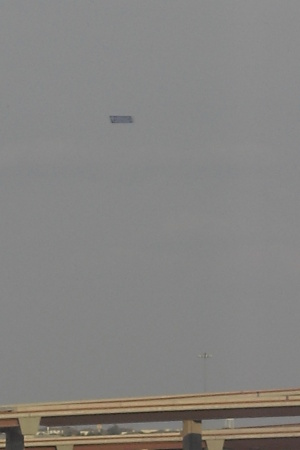 MUFON
report of rectangle UFO on September 3, 2011 at Round Rock, Texas: “I
saw a rectangle-shaped object that seemed as large as an 18 wheeler or
bigger hovering at least a 1000 feet moving from right to left slowly
for about five minutes, and then it began to move away at a faster pace
until it disappeared in the horizon after about 2 minutes. I took
pictures because it seemed very odd that something shaped like a
rectangle was flying with nothing else near it.” 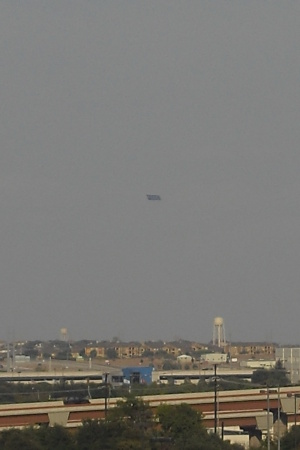 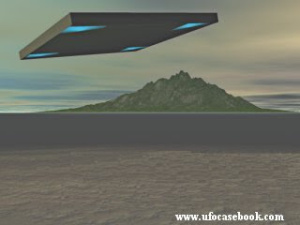 The
rectangle drones can be converted to weapons platforms to deliver
quick, silent death to identified targets considered hostile.

The
consensus of some aircraft engineers who have read the reports or
actually seen the platforms in operation is that they may be powered by
magnetic monopoles and do not fly, but “surf” the magnetic field of the
Earth. 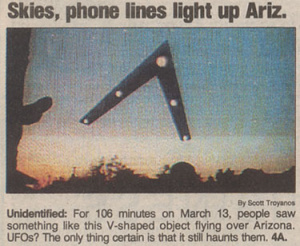 The
larger craft, such as the mammoth rectangles and balck triangles seen
over Texas and during the famous “Phoenix Lights” sightings of March 13,
1997, are believed by some aircraft experts to be giant stealth
dirigibles, unarmed, and used for psyop operations and secret
surveillence of population centers in the U.S. and around the globe.

The smaller triangles and V-craft have been spotted as far back as the late 1970s. 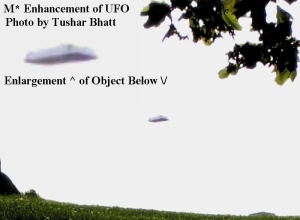 How to report your sightings

The phenomena and sightings of rectangular craft is relatively new. If you witness a rectangle craft—or any object in the sky you cannot explain—write
down the details of your sighting as soon as the event as possible. If
there are other witnesses, discuss the details of what was seen amongst
yourselves. Then make a report to MUFON at mufon.com so they can record and investigate the case.

» Tearing Down Social Platforms Like Gab Won't Stop the Violence
» Something Strange Is Happening! Widespread Outages Across A Variety Of Platforms
» Platforms of Illumination have been created to support “mass” consciousness ascension
» The NEW Social Media: Alternatives to Facebook, YouTube, Twitter, and Other Big Tech Platforms
» Manlinda Gates Warns Social Media Platforms Are Due a ‘Reckoning’ for Not Censoring Enough