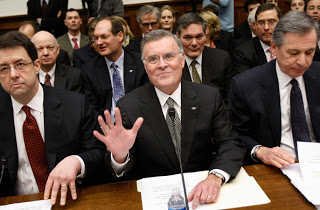 Systems For Inducing Change In A Human Physiological Characteristic


We wonder, do they also have patents on the following:

We're certain there are more, but we'll leave it to readers to complete the rest of the BofA patent portfolio in comments.

Comments posted at the Dailyball:

It's actually not an issued patent yet, just an application that was laid open 18 months after the
2/11/10 filing date.

The claims--which define the legal scope of the so-called "invention"--are absurdly broad.

Claim 1, for example, is completely anticipated by a scene out of A
Clockwork Orange, the one where Alex is bound to a chair with his eyes
forced open to watch scenes of the old ultraviolence. A second
invalidating prior art reference is the scene in Blade Runner where
Deckard gives Rachel a Voight-Kampff test.

The bigger question, though, is what IN THE HELL is a bankrupt bailout
swine like BAC is doing blowing money on obtaining patents on human
psychological experiments? Wouldn't that money have been better spent on
remedial matters like, umm, I don't know, not committing fraud on the
courts and the public? Or on not losing assloads of money at the track?

Sep 23, 2011 at 11:53 AM | Cheyenne
The Bilski case, handed down by the CAFC (Federal Circuit Appeals court
which hears patent-related cases) and affirmed by the US Supremes last
year (they "clarified" the test under Bilski), outlines the parameters
for so-called business method patents. It was thought that Bilski would
kill these patents (the majority of the CAFC hate them). It didn't.
However, the validity of these patents as proper subject matter for
patents took a huge hit with this case, IMO. BoA apparently has filed
for a Bilski-like patent. If it made its way to the CAFC (as it's
presently constituted) and assuming the PTO allows and issues the
patent, it would be killed by Bilski.

Sep 23, 2011 at 12:16 PM | Josie
Thinking about this a little more, I suspect that BAC's angle here is to
sidestep statutory limiits on banking and teller fees. How would BAC do
this?

Let's say the statutory limit for charging customers for using a teller
is $5. You get your statement and find that BAC charged you a $7 teller
fee. What's BAC's defense? We charged a $5 fee and a $2 royalty for
using our patent. (As if BAC customers aren't pissed off enough
already.)

Don't put it past the criminal enterprise otherwise known as B of A to
try pulling a stunt like this. Among other things, BAC has foreclosed on
homeowners who didn't even have a mortgage (paid cash), and, when
foreclosed on themselves, simply ignored the judge's order.

That's just one of about 150 patents BAC has gotten.

I hope they lose everything & BURN in HELL. F'EM

Sep 23, 2011 at 1:24 PM | S. Gompers
Talk about ironies, on one tab I'm filling out a post bankruptcy
"required" course online to fulfill the Court's requirement and wrap up
my personal BK. One of the sections required ( timed) is about
Budgeting, and discretionary spending, since I read a little faster than
the courser's timed section requires, I'm now reading and responding to
the BoA patent pending....OMG!
If I could reach through my computer screen I would choke Ken Lewis. I'm
64, had a career in the commercial real estate industry for almost 30
years, I'm broke, lost my home(s) all my investments in land, gone, I'm
renting and two days ago I was cleaning up some landscaping for $40. I'm
so alienated, I sense people look through me. Wall Street coupled with
BoA destroyed my life, s strong statement, maybe, but maybe not for the
eight individuals here in Las Vegas, all in the real estate development
business who ended their lives since 2008. Where Are The Indictments?

The BIG CLUBS response to us PEONS: "GO TO HELL"

That's funny because the yellow pages listng for my bank led to a phone
sex line. Cue sultry voice: "If you're a man press 1, if you're a woman
press 2" I told my bank about it but when I tried the number again the
same voice, same message ROFL!

LOL, that is why they are trying to patent it, in order to corner the
market as a banking "service" since they cannot make honest money...

Sep 24, 2011 at 9:12 AM | S. Gompers
At number 0027 it sais: and within the reference index a very high hand
temperature is associated with extreme relaxation, the respondent is
likely daydreaming.

Wtf? extreme relaxation= daydreaming?? I thought it meant you were calm
and aware.. By this anyone who is calm would be considered daydreaming
while in fact that might be the best state to debate in and get your
point across.. (have you ever called anyone while daydreaming??
especially a helpdesk??) Wordmagic... Never seizes to amaze me what and
how words get manipulated and pushed in a different framework of
meaning.

Sep 24, 2011 at 10:14 AM | GhanZ
So if in the course of a telemarketing call, where it is assumed the
recipient of said call MUST agree to purchase, as the script being read
by the marketer has been shown to "induce a productive emotional state"
(AKA brainwashing, or hypnotizing), should the recipient prove resistant
(says NO or hangs up~!) to the marketing tactic, a fee could be
assessed for all non-sales claimed by "emotion"! In addition, all
employees must be monitored by electronic means to ensure they to the
company line, mind, body and soul. All dissension, even in thought could
be brought to bear against the employee and used in salary negotiation
or termination regardless of actual sales performance.
B of A, now Bank of Big Brother

Sep 24, 2011 at 2:27 PM | R1USA
As an old geezer, I miss the old traditions. After Fukushima I expected
the Japanese nuclear power plant owners and regulators to honorably fall
on their swords, but they didn't. I still think the US captains of
industry should go down with their ships, but they don't. The old ways
were the best.

Sep 25, 2011 at 1:27 PM | Mark
Call me a young geezer, but I feel the same way, Mark. Not a single
person responsible for the financial crisis -- neither regulator nor
bank executive -- has even admitted fucking up. If Ben Bernanke or Tim
Geithner were real men (they're not) they would have resigned in SHAME
years ago. Instead, they've been lying and trying to cover up their
mistakes ever since. Hell, Geithner is so stupid he seems to actually
believe his own BS.

No kidding... The Banksters Rape and pillage, then the Courts bless them for it, and with No concern about guilt, as they're "just doing their jobs"... Really!
I'm sure many of the sheeple are not going to be able to handle the Truth. Even being somewhat 'awake' and aware, I have difficulty grasping this crap without just wanting to go postal or escape the matrix.
Reality though is that we cannot escape, so we have 2 choices, bend over or help create the change.

Let's 'create' the change, and let them be the ones to bend over- We're drivin'- :mooning:

Guest
This cracks me up. Do actual people still have actual money in BoA? Then they deserve to lose it. How many warnings do you need?

Only the stupid ones, and their heads are in the sand, amongst 'other places'- :easter eggs: :easter:

»  Banks Can Legally Steal Customer Funds From Private Checking Accounts....This means that once a banking customer deposits their money into an account with a bank, the funds become property of the bank.
» RemovingTheShackles – Attempted Patent Of Human Embodiment By Bank Of America And VISA Intl – 27
» "WELLS FARGO WILL HAVE CALL CENTERS OPEN THIS EVENING FOR 7 DAY 24 HR SERVICE.THIS IS TO SERVICE THE CALL INS FOR EXCHANGE APPOINTMENTS."
» One Man Holds a Patent That Could Crush Monsanto and Change The World
» A Man Holds The Patent That Could Destroy Monsanto And Change The World Forever