Click to enlarge.
© FRANCE 24/ Charlotte Boitiaux
Earlier, Mandela’s granddaughter told reporters that he was in a “very critical but stable” condition.
By Catherine NORRIS TRENT reporting from Pretoria (video)
FRANCE 24
Nelson Mandela’s health has improved overnight though the anti-apartheid hero remains in a critical condition, the office of South African President Jacob Zuma said Thursday.
“He is much better today than he was when I saw him last night. The medical team continues to do a sterling job,” Zuma said in a statement.
He added that although Mandela’s condition remains critical, it is now “stable”,
The President’s comments come after Mandela’s granddaughter Ndileka Mandela told reporters earlier on Thursday that the former South African president is in a “very critical but stable” condition. “Anything is imminent,” she added. Mandela was put on life support on Wednesday.
Ndileka emerged from the hospital with other family members to accept bouquets of flowers from members of the public, FRANCE 24’s Charlotte Boitiaux reported. She returned to Mandela’s bedside in tears, she said.
Mandela’s eldest daughter Makaziwe said Mandela was still responding to touch. “I won’t lie, it doesn’t look good. But as I say, if we speak to him, he responds and tries to open his eyes. He’s still there. He might be waning off, but he’s still there,” she told SABC radio after visiting him in hospital on Thursday.
Family elder Napilisi Mandela, who had been at Mandela’s bedside on Wednesday evening, told AFP that he was using machines to breathe. “It is bad, but what can we do,” he said.
Zuma cancels plans
President Zuma late Wednesday abruptly cancelled a trip to neighbouring Mozambique after he visited Mandela, who has been in critical condition for several days.
It is the first time Zuma has scrapped a public engagement since Mandela was hospitalised on June 8 with a recurring lung infection.
“President Zuma was briefed by the doctors who are still doing everything they can to ensure his well-being,” a statement from the presidency said.
Read More and Watch Video Here
***************************************************************************************************
Prayer vigil for Nelson Mandela after condition improves 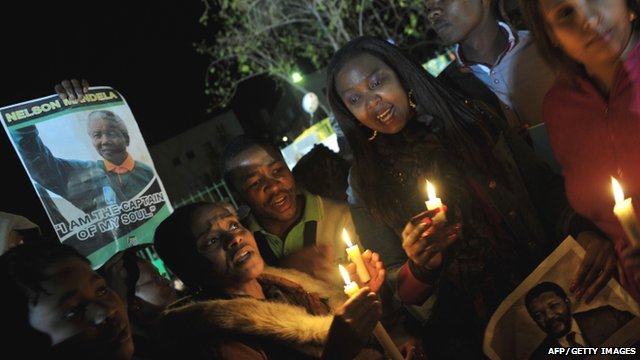 Karen Allen said people had been singing and lighting candles outside the hospital in Pretoria
South Africans have been holding an all-night prayer vigil for former President Nelson Mandela, outside his former home in Soweto.
The crowd have been singing and saying prayers for Mr Mandela’s health, on what is now his 20th night in hospital.
South Africa’s first black president – an icon of the anti-apartheid struggle – is suffering from a lung infection.
President Jacob Zuma said on Thursday that the 94-year-old’s condition had improved, but still remained critical.
“He is much better today than he was when I saw him last night,” Mr Zuma said after speaking to Mr Mandela’s medical team.
Mr Zuma cancelled a visit to Mozambique to visit Mr Mandela in hospital.
Meanwhile Mr Mandela’s daughter Makaziwe said he was “still there” and responding to touch.
Nelson Mandela’s eldest daughter Makiziwe’s criticism has echoed the sentiments of many South Africans who have baulked at the “intrusive” nature of some of the media coverage around the former president’s state of health.
One such report suggested that Mr Mandela had suffered cardiac arrest on 8 June when he was rushed to hospital, and more recently some unconfirmed media reports said the national icon was now on life support. Some have described such details as “too much information”, others as “insensitive”.
Meanwhile the media continues to camp outside the heart hospital in Pretoria where he is being treated, as well as outside his home in Johannesburg, waiting for any news.
This is particularly uncomfortable for traditional South Africans, who see all the media attention as not only distasteful but also going against African culture.
There is a huge respect for death here and it is never mentioned before the event.
Even in this dark hour, very few speak frankly about the 94-year-old’s passing – instead many are still praying for his recovery.
But she accused some journalists of being like vultures, waiting for her father to die.
Emotional crowds gathered outside the hospital, adding messages of support for Mr Mandela, known by his clan name Madiba.
Children released 94 balloons – one for every year of the ex-president’s life – into the air in his honour.
Correspondents say South Africans now seem resigned to the prospect of his death.
“We don’t like seeing Mandela going through so much pain, he has had a tough time in his life and he’s gone through a lot of struggle. I think this struggle should get over sooner,” Khulile Mlondleni told Reuters news agency.
“We are all going to feel bad when he passes [away], but at the same time we will be celebrating his life. He has done so many great things for this country,” said 25-year-old John Ndlovu, quoted by the agency.
As crowds prayed in Soweto on Thursday evening, South Africa’s ruling African National Congress (ANC) said it would hold vigils each day that the former leader remained in hospital.

Singing and praying for Mandela

Re: The office of South African President Jacob Zuma said Thursday that the health of former leader Nelson Mandela had improved overnight Sat Jun 29, 2013 10:18 am

Guest
someone should get him some nano-colloidal silver water, seriously; perhaps mist it into his affected lung(s). Praying optimal health for this great soul :)