Nevada rock carvings may be oldest in North America

A team of anthropologists has dated rock carvings in western Nevada to between 10,500 and 14,800 years old, making these carvings the oldest known petroglyphs in North America. The ancient rock carvings – which are on boulders at Winnemucca Lake, located about 35 miles northeast of Reno, Nevada – have been known for several decades, but had only recently been dated using radiocarbon dating.
These results were published in the August issue of Journal of Archaeological Science. The paper’s lead author, Larry Benson, of the University of Colorado Museum of Natural History, said, in a press release,
[/font][/color]

Prior to our study, archaeologists had suggested these petroglyphs were extremely old. Whether they turn out to be as old as 14,800 years ago or as recent as 10,500 years ago, they are still the oldest petroglyphs that have been dated in North America. Wide view of a petroglyph site where some limestone samples were obtained. Image via L. V. Benson, et al.
Benson and his team obtained permission to study of the petroglyphs from the owners of the land, the Pyramid Lake Paiute Tribe. The carvings, large complex designs of grooves and dots, were carved deeply into several large limestone boulders. Benson said:
[/font][/color]

We have no idea what they mean. But I think they are absolutely beautiful symbols.  Some look like multiple connected sets of diamonds, and some look like trees, or veins in a leaf. There are few petroglyphs in the American Southwest that are as deeply carved as these, and few that have the same sense of size. 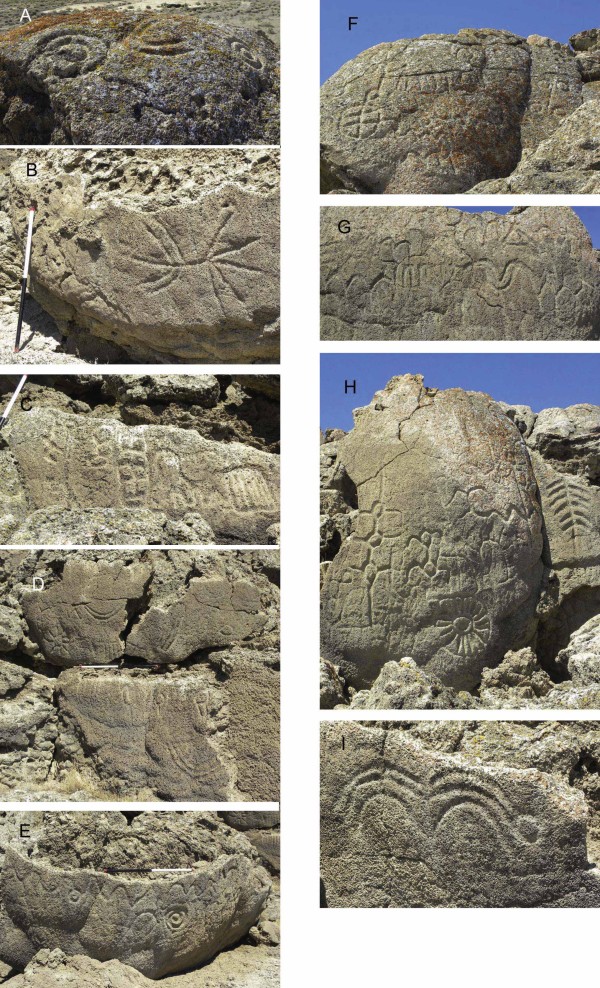 Details of different petroglyphs at Winnemucca Lake. Image via L. V. Benson, et al.
Winnemucca Lake is now dry. But it was once connected to nearby Pyramid Lake as a single body of water. At its highest, Winnemucca Lake’s water level reached an elevation of 3,960 feet before additional water spilled into Emerson Pass, located north of the lake. Some boulders bearing the carvings would have been partly submerged when the lake’s water level was highest. But water levels had repeatedly risen and fallen over time, providing periods when some boulders would have been accessible to ancient rock carvers.
Carvings near the base of some boulders were partially covered in what Benson described as a white layer of carbonate. This carbonate crust was a type of limestone, formed from the precipitation of dissolved carbonate minerals in the lake water onto submerged parts of the boulders. The crust line on the boulders ended where the lake water level would have been at its highest. Above the crust was the original surface on which the petroglyphs were carved. Since some petroglyphs were covered in precipitated carbonates, this indicated that the carvings were made some time when the boulders were exposed to air, before being submersed once more in the rising water level. 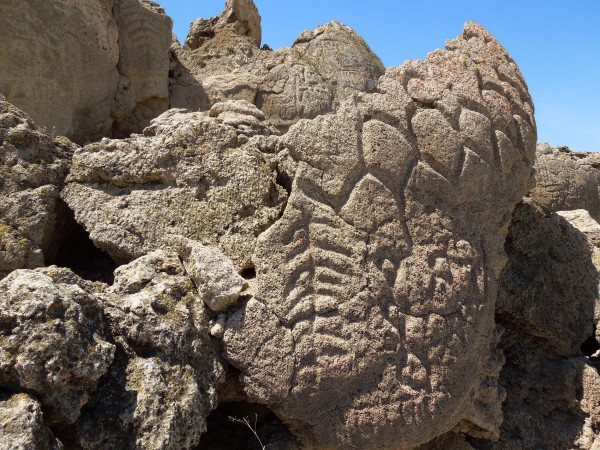 Close-up of a design described by the scientists as a “tree form” that measures 70 cm (27.5 inches) tall. Image via L. V. Benson, et al.
Benson obtained rock samples at different heights on the boulders–not on the petroglyphs themselves, but in nearby sections with the same geological history–and at other locations in the area including Pyramid Lake. He and his colleagues used radiocarbon dating to determine the age of the limestone samples. Limestone underlying the petroglyphs were found to be 14,800 years old. Samples from Pyramid Lake with the same geologic history, however, showed two periods when falling water levels would have exposed the base of the boulders to air: between 14,800 and 13,200 years ago, and again from 11,300 to 10,500 years ago. Sometime during one of those two epochs, early inhabitants of the area left their carvings on the rock.
The younger epoch – 11,300 to 10,500 years ago – coincides with other archaeological discoveries in Lahontan Basin, a region that includes the Winnemucca Lake bed and Pyramid Lake. Yet another correlation to that epoch is a significant archaeological discovery made 70 years ago: a partially mummified body was found in Spirit Cave, Nevada, about 60 miles east of Reno. Spirit Cave Man, as he came to be known, had been laid to rest in a shallow grave, dressed in a fur robe, a woven marsh plant shroud, and moccasins. Radiocarbon dating of his remains and clothes revealed he had died about 10,600 years ago.
The older epoch – 14,800 to 13,200 years ago – was contemporaneous with other archaeological findings. For example, fossilized human excrement dating to about 14,400 years ago was found in Paisley Caves in south-central Oregon, along with the bones of horses and camels. These animals became extinct in North America about 13,000 years ago.
Previously, petroglyphs near Long Lake in central Oregon were thought to be the oldest rock carvings in North America; some had been partly buried by outflow from a volcanic eruption that occurred 7,630 years ago, which indicated that the carvings were made sometime before that eruption. Benson and his colleagues aren’t sure of the epoch in which the Winnemucca Lake petroglyphs were carved. Whether it’s as early as 14,800 years ago or as late as 10,500 years ago, these carvings are now the oldest known petroglyphs in North America.
Bottom line: Ancient rock carvings in western Nevada, about 35 miles northeast of Reno, are believed to be the oldest known petroglyphs in North America. In a paper published in the August 2013 issue ofJournal of Archaeological Science, University of Colorado scientist Larry Benson and his colleagues reported that radiocarbon dating of samples from limestone boulders that bore the carvings show that the petroglyphs were created between 14,800 to 10,500 years ago.[/font][/color]
Thanks to: http://earthsky.org/