OUT OF MIND » CONSPIRACY THEORIES & ENDURING MYSTERIES » CONSPIRACY & FALSE FLAG EVENTS: PAST & PRESENT » JFK Assassination: A blood sacrifice that even now, reverberates through our bones

JFK Assassination: A blood sacrifice that even now, reverberates through our bones

JFK Assassination: A blood sacrifice that even now, reverberates through our bones Thu Nov 21, 2013 7:47 am

Admin
Posts : 107476
Join date : 2012-01-04
Location : Woodstock Nation
JFK Assassination: A blood sacrifice that even now, reverberates through our bones
Posted on November 21, 2013 by Ann Kreilkamp
I appreciate this assessment of the point by point significance of JFK’s breathtakingly independent attitudes and policies, any one of which could have served to motivate the PTB to eliminate him. It’s not so much who, exactly, killed Kennedy, that matters; for though we may know only one of the patsies, and though we may argue endlessly about others — that shot fired from the grassy knoll, the head whipping back as blood and brains splattered over Jackie’s pink coat, Oswald clutching his stomach and falling — even so, we realize that details were designed to distract.
What matters is why. JFK defied the shadow government by punching through their tiny self-serving cage over and over again. No U.S. President since has exhibited his singular Profile in Courage.
Those of us who stared, shrunk in shock and grief, at the horse-drawn hearse slowly rolling through the streets of D.C.,  may not realize that this very public ritual slaying was a mind-control device to lock us into subtle, abject, collective fear. Or that this ritual slaying would be amped up and repeated on 9/11. Or that in order to move out of fear we must, first, become aware how its habitual contraction has imprisoned us in its paralyzing grip for fully 50 years.

British Ryan Gosling on RT: “The message of JFK’s gruesome assassination is designed to fundamentally undermine the social fabric. The horror slips under the radar of consciousness to stamp into millions of psyches what, with impunity, the secret government can do.”
Who killed JFK? And why did they do it?
November 20, 2013
stateofthenation2012 via jhaines6


*This article is a condensed version of a much longer essay which can be found at:
Warren Commission Report: The Most Absurd Investigation In US History 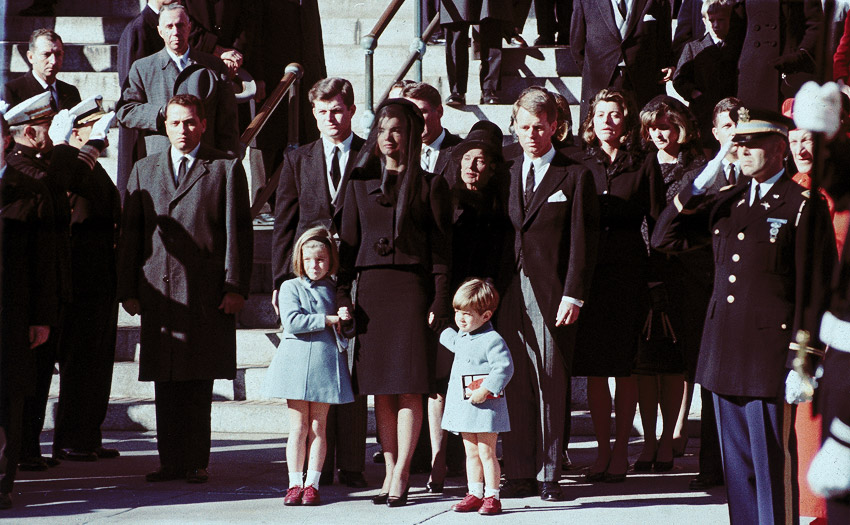 John F. Kennedy was assassinated on November 11, 1963 by way of a classic, execution-style ritual sacrifice known as the “killing of the King”*. This form of unusually public and gruesome murder of an extremely popular world leader is designed to shock and awe the mass consciousness. And so it did.

“There is a Secret Society ritual that is ‘the killing of the King.’ The national leader of the people is only a figurehead and has no real power. Power lies behind the scenes within dark secrets. Others pull the strings of the politician puppets. If an upstart, politician puppet makes waves or rocks the boat or doesn’t play ball…..that puppet gets eliminated. It is why Caesar was killed. It is why Kennedy was killed. If you disturb the real power structure, you can be targeted for removal. Such ‘assassinations’ demonstrate to the world who has the real power; it is a bloody statement of who is really in charge; and the truth is our secret rulers control from dark shadows. (There is a reason the Ace is higher than the King in a deck of cards. The Ace represents the Secret Societies that truly run the show).”
Excerpt from: WAS JFK KILLED BECAUSE OF ROSWELL? by Doug Yurchey 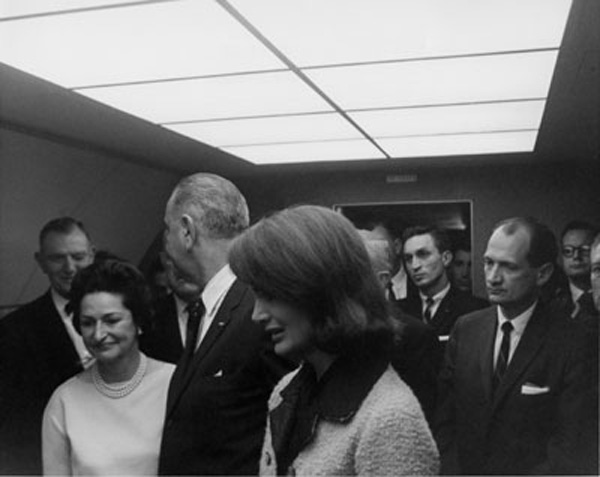 LBJ returning a knowing wink to Texas cohort, Congressman Albert Thomas during his swearing-in ceremony aboard Air Force One.
By acting as a truly righteous and just leader, JFK made so many enemies that his assassination was all but a forgone conclusion, and therefore just a matter of “execution”. However, what the TPTB failed to realize, was that a self sacrifice on the order of JFK’s would produce a whole generation of anti-war activists who literally shut down the Viet Nam War – an unprecedented act of defiance in American history. This galvanization of moral ascendancy through the peace movements of the 1960’s & 70’s is perhaps the only time in recorded history that a popular movement was successful at bringing a war machine to a screeching halt!
Because of the extraordinary, enlightening and edifying effects that John F. Kennedy had on the American consciousness, TPTB must have determined that they had no choice but to kill the messenger. JFK’s message of peace and brotherhood and good will was simply to contrary to their agenda. As a “pitchman for peace”, he was far too effective in delivering a message of hope to the entire world. His sincerity was further evidenced by his intention to wind down the Viet Nam War against the wishes of a burgeoning military industrial complex which had never before been thwarted.
In closing the raw truth about the assassination of JFK is that he was to be made a dramatic example of what would not be tolerated by the World Shadow Government. His extremely brutal and public execution was quite purposeful so that no one would ever forget the savagery of the murder. In this way every president and prime minister, every king and queen, every chairman of the board and CEO across the planet would know the following fact of life on Planet Earth:
That such a power exists which can execute a US President in broad daylight with absolute impunity. And that cover-ups of such a serious crime and conspiracy are as easy as fabricating a new JFK assassination conspiracy theory every other year.
However, TPTB failed to realize that there were so many involved in this cover-up that the truth would be revealed sooner or later. And so it has.
Here’s just one little video that will forever provide a photo-documentary of highly incriminating actions perpetrated by JFK’s Secret Service detail as his motorcade began its journey through Dallas on November 22, 1963.
Secret Service orders stand down just prior to JFK’s assassination
That there was an entire “system” dedicated to JFK’s demise once he revealed his true agenda is now without question.
Whereas TPTB were completely committed to perpetual war, economic exploitation, and divide and rule, John F. Kennedy was genuinely dedicated to world peace, economic justice, and social equality.
State of the Nation 2013
admin@stateofthenation2012.com

Author’s Note:
For the many Beatniks and Baby Boomers who ‘witnessed’ the JFK assassination by being innocently attentive to the evolving saga, something very profound and “earth-shattering” took place. Even though this meticulously planned murder and cover-up conspiracy was obviously orchestrated by those various interested parties outlined above, it was an event which was pre-ordained by the Highest Power.
Its profound and far-reaching repercussions served to catalyze the most consequential shift in American consciousness ever to occur. Millions of disaffected youth and young adults were compelled to “leave the reservation”, and unshackle themselves from the quickly emerging Consumer Society. The resulting and unprecedented spiritual diasporasent truth seekers to the East in search of meaning, in a quest to know life’s purpose, and in the ultimate pursuit of Truth. 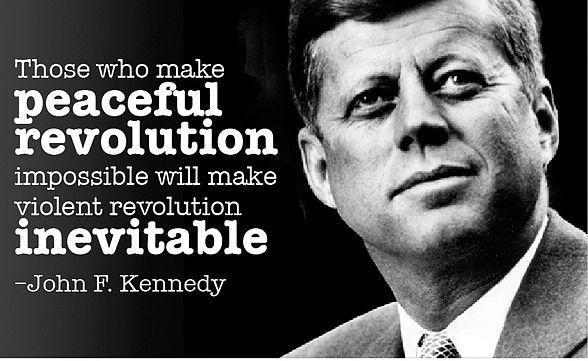 In Memoriam:
JOHN F. KENNEDY: A True Profile In Courage

May the spirit of JFK live on in the hearts of all of US.
And may those who were touched by his profile in courage
rise up and demand an end to war … all war, everywhere.

© 2013 State of the Nation
Permission is granted to post this article as long as it is linked back to the following url:http://stateofthenation2012.com/?p=1296

OUT OF MIND » CONSPIRACY THEORIES & ENDURING MYSTERIES » CONSPIRACY & FALSE FLAG EVENTS: PAST & PRESENT » JFK Assassination: A blood sacrifice that even now, reverberates through our bones