Star-Aligned Megaliths And Their Significance To People In Prehistoric Europe

Star-Aligned Megaliths And Their Significance To People In Prehistoric Europe Wed Jun 25, 2014 10:22 pm

MessageToEagle.com - This week, a developing field of research that merges astronomical techniques with the study of ancient human-made features and the surrounding landscapes will be highlighted at the National Astronomy Meeting (NAM) 2014 in Portsmouth.

From the 'Crystal Pathway' that links stone circles on Cornwall's Bodmin Moor to star-aligned megaliths in central Portugal, archaeo-astronomers are finding evidence that Neolithic and Bronze Age people were acute observers of the Sun, as well as the Moon and stars, and that they embedded astronomical references within their local landscapes. 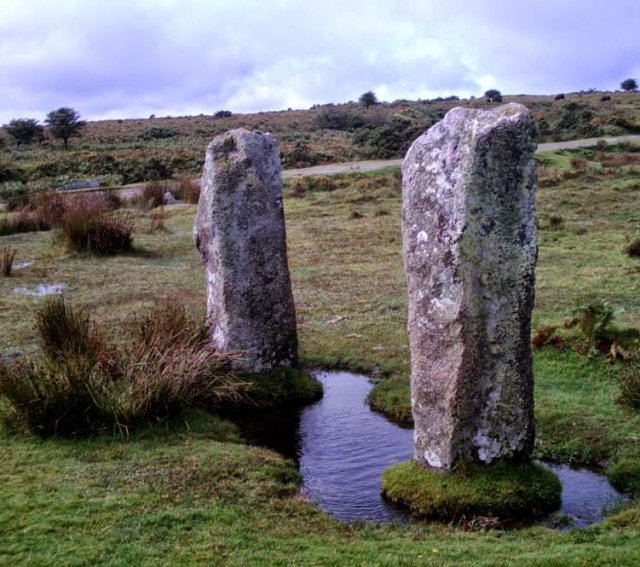 The Pipers Outliers to the main circles. When standing between the stones, one to the right and the other to the left, one looks North & South. When lining both up one faces East & West. Credit: B. Sheen


"There's more to archaeo-astronomy than Stonehenge," says Dr Daniel Brown of Nottingham Trent University, who will present updates on his work on the 4000-year-old astronomically aligned standing stone at Gardom's Edge in the UK's Peak District.

"Modern archaeo-astronomy encompasses many other research areas such as anthropology, ethno-astronomy and even educational research.


"We have much to gain if the fields of astronomy and archaeology come together to a fuller and more balanced understanding of European megaliths and the societies that built them. 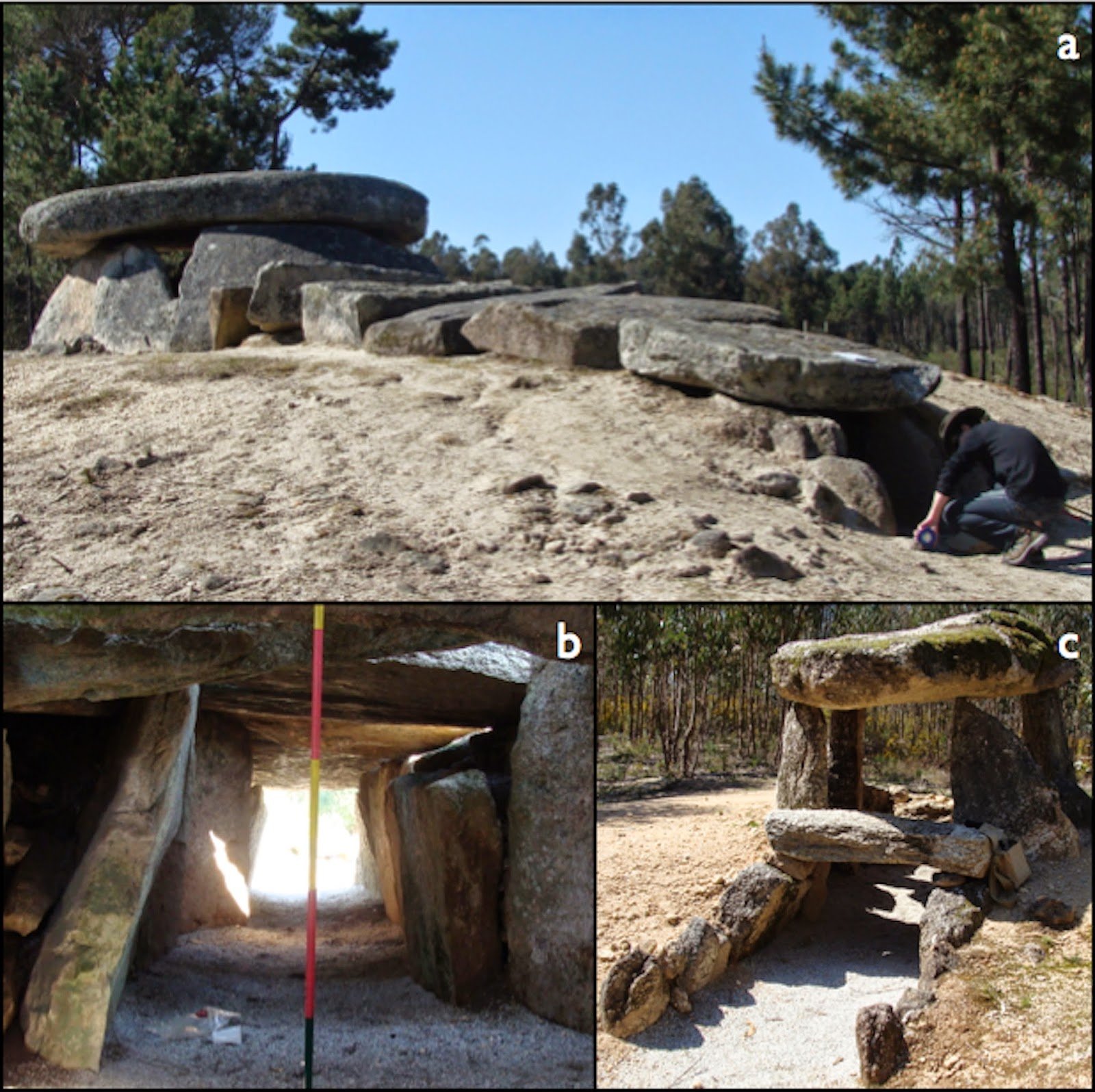 Click on image to enlarge
Megalithic cluster of Carregal do Sal: a) Dolmen da Orca, a typical dolmenic structure in western Iberia; b) view of the passage and entrance while standing within the dolmens' chamber: the 'window of visibility'; c) Orca de Santo Tisco, a dolmen with a much smaller passage or corridor. Credit: F. Silva


Archaeologists will need to learn some basic observational astronomy, but archaeo-astronomers will also have to engage more with the archaeological record and ask different research questions," Dr Fabio Silva, of UCL and co-editor of the recently established Journal for Skyscape Archaeology, said.

"It is no longer enough to simply collect orientation data for a large number of monuments spread over vast regions and look for broad patterns. In addition, archaeo-astronomers cannot base their assumptions on modern concepts of precision and symmetry of axis, unless this can be independently demonstrated. To understand what alignments meant to prehistoric people and why they decided to incorporate them into their structures, we need to identify patterns and interactions between structures, landscape and skyscape." 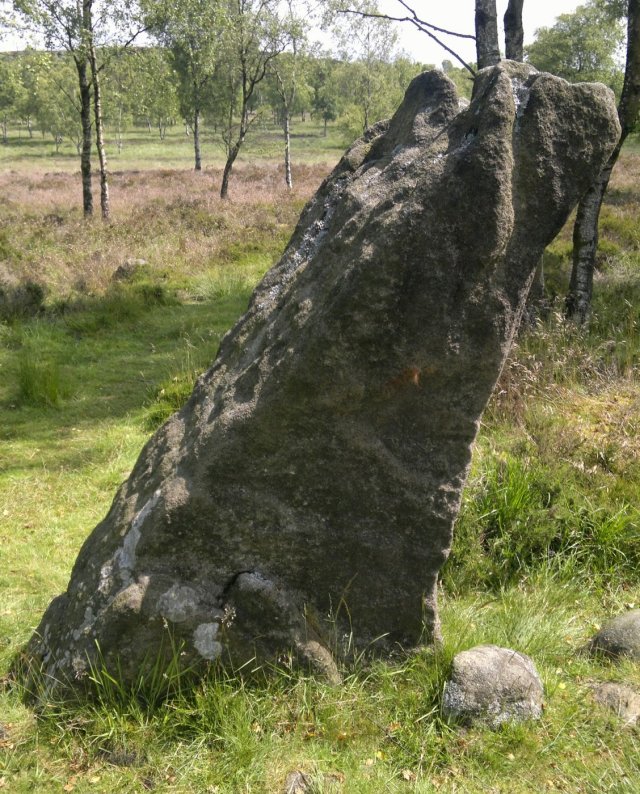 The standing stone located at Gardom's Edge with its distinct triangular profile and erected 4,000 years ago. The flat north facing side just receiving sunlight has been orientated astronomically. The location of this stone within its surrounding landscape shows signs of careful selection and symbolic meaning. Credit: D. Brown


Silva's studies of European megaliths focus on 6000-year-old winter occupation sites and megalithic structures in the Mondego valley in central Portugal. He has found that the entrance corridors of all passage graves in a given necropolisare aligned with the seasonal rising over nearby mountains of the star Aldebaran, the brightest star of Taurus.

This link between the appearance of the star in springtime and the mountains where the dolmen builders would have spent their summers has echoes in local folklore about how the Serra da Estrela or 'Mountain Range of the Star' received its name from a Mondego valley shepherd and his dog following a star. 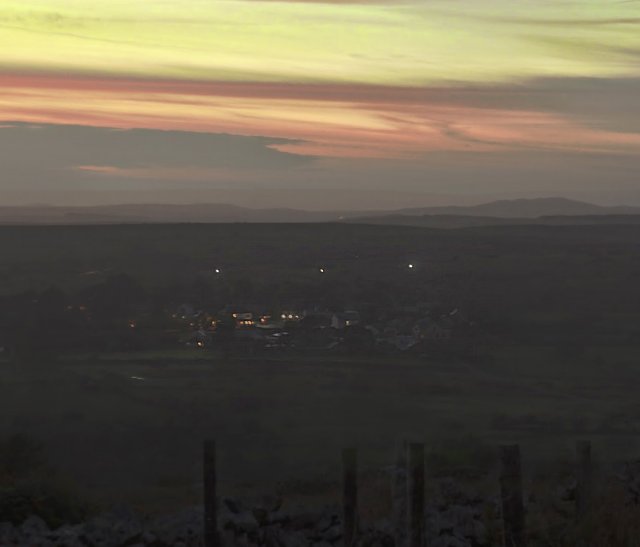 The three circles that comprise The Hurlers monument may be laid out on the ground to resemble Orion's Belt. To illustrate the point the image shows them lit by and seen looking north from Caradon Hill, a similar view can be seen from Stowe Hill looking south. Far from being three isolated circles on the moor they are linked into one landscape. Credit: B. Sheen


Pamela Armstrong, of the University of Wales Trinity St David, integrates the idea of skyscape in her work on the finest stone chambered tombs in Britain, located in the north Cotswolds. Neoltihic people buried their dead in these earthen mounds, but they may also have oriented their tombs toward significant points of lunar, solar and stellar rise and set on their local horizons.

Her work sheds light upon whether these Neolithic settlers practiced a different astronomy to that of the Mesolithic hunter gatherers who preceded them on this landscape.

Additionally, Brian Sheen and Gary Cutts of the Roseland Observatory have worked together with Jacky Nowakowski, of Cornwall Council's Historic Environment Service, to explore an important Bronze Age astro-landscape extending over several square miles on Bodmin Moor in Cornwall. At its heart lie Britain's only triple stone circles, The Hurlers, of which two are linked by the 4000-year-old granite pavement, dubbed the Crystal Pathway.

The team has confirmed that Bronze Age inhabitants used a calendar controlled by the movements of the Sun. The four cardinal points are marked together with the solstices and equinoxes.

"The Pipers are standing stone outliers to the main circles. When standing between the stones, one to the right and the other to the left, one looks north & south; when lining both up, one faces east & west," says Sheen.

"We also think the three circles that comprise The Hurlers monument may be laid out on the ground to resemble Orion's Belt. Far from being three isolated circles on the moor they are linked into one landscape."