Yesterday at 10:02 pm by Carl Spackler

The Grand Illusion of Time

Free Spirit, Guest
Waking Times
Time is in essence a grand illusion that has taken a hold of our consciousness and conditioned our reality to believe in it, thus we then become enslaved by the illusion and suffer the karmas associated with it. Bound to the ticking of the clock, we slowly but surely create our own death. The entire infrastructure of the 3rd dimension is built around time (scheduling, dates, sequencing and chronological order) and thus reinforces the illusion.
Understanding Time can also open up dimensional pathways to other worlds/times/realities that serve as a bypass for the inevitable collapse scenarios.
In the Singularity of Source, there is no time – only an Infinitely Conscious Presence of Being that exists in all forms and all spaces at once. As one comes to recognize Source, one is freed from the bonds of time and all karmic causality is destroyed. In the Immortal Timeless Presence of Source – the past (or the future!) have no power and one becomes a Karma Immune Being. This is an extremely powerful vibratory state to exist in and by residing here one is free from ALL conditionings, delusions, illusions and cycles of time.
Karma no longer has power over one because the Law of Cause and Effect needs a temporal (time) bubble to exist within.
Outside of time, nothing can precede anything or condition any future moment, for there is no future to affect. In the same vein, the energy of the past peels away from one’s being and becomes nothing. The causal links between the past and the present are severed, thus no karma can possibly ripen or even exist in the Timeless State. As for the redemption and forgiveness of karma, the embodiment of Source Presence is the most powerful – and ultimately the only real mechanism behind karmic cleansing. Source was and always is free from karma. Karma is simply a denser shroud that cloaks our Original Innocence. Timelessness is inherently innocent for there is no time in which anything different can stain it.
For many people, it is absurd to believe that time is an illusion, for it appears to be reflected everywhere and appears to exist as a fundamental, inherent and unchangeable condition of this dimension. Thus we appear to be trapped within it and there seems no mechanism for transcending time.
It is very important for readers to understand what time is. In essence, it is nothing other than a mental construct created by the ego-mind to separate out perceptions and events into an order, so that the sensations arising from them can be assimilated and made sense of.
Truth – Beings in the 3rd dimension can only ever perceive one thing at a time.
It may appear we can perceive many things in the linear dimension at once, but in reality, the linear mind can only handle one perception at a time – no matter how ‘bunched up’ these perceptions seem.
The mind in the 3rd dimension cannot perceive directly the Timeless Singularity of Source, for the mind exists within duality, and within duality all things appear distinctly separate. In order to perceive all of these distinctively separate phenomena, the mind projects a ‘holding space’ for these phenomena called space-time. The space aspect creates a medium for distinguishing everything and providing a contrast between one phenomenon (object, sound, smell or any other kind of sensation) and another. 3-dimensional space has no inherent reality of its own and cannot be perceived to exist as a ‘stand-alone’ phenomenon. It always requires some kind of phenomena so as to be distinguishable. The construct of space allows the mind to see where one form ends and another begins.
However, once one penetrates the realms of the subatomic – there is simply a sea of superstrings that are not at all separately grouped, in relation to the 3D objects that contain them. 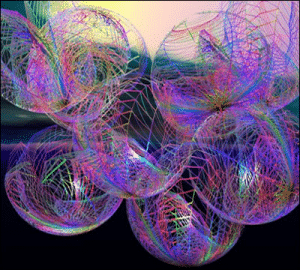 There is no boundary between the superstrings in me and the superstrings outside of me. The illusory sense of boundary that exists within 3D is transcended.
Readers can reflect on this. Where does the ‘me’ start and the ‘me’ end?
What is the ‘me’? Where is the ‘me’?
One can reflect deeply and find that space is simply a mental vacuum – a mental space – where mental projections can be inserted into. Because the sensations that the mind perceives are externalized, this mental space then appears to exist outside of oneself and have a distinct reality of its own. Belief in its inherent reality then creates the illusion of the 3rd dimensional spatial matrix. The illusion of space then gives rise to the notion of distance, which is nothing other than a mirroring of our own separation from Source.
This illusion was spawned so early in our formative years that we have come to forget there is any other way of perceiving reality. The transcendence of the illusion of distance (a concept created by the mind) results in the ability to bi-locate and teleport. As the energies from the Central Sun reach their zenith, this will then facilitate bodily teleportation and the subsequent Ascension as one is able to stand outside of the limitations of the 3D matrix of space-time.
One can also enter the microcosm in this state. Once I was able to see into the space between the outside and the inside surface of a quark as described here:-

These superstrings are in everything and have no size. They constantly are seen to rotate, flicker in and out of existence, and birth new strings that break away and form new superstring structures elsewhere. They emanate an extremely powerful golden light. The surfaces of individual quarks appear as shiny rainbow translucent membranes. One’s consciousness can zoom in to see billions of superstrings creating an infinitely intricate fractal pattern that exists between the inside and the outside of the quark – collapsing that particular duality. In the space between the perceived “outside and inside” of a quark, a hundred billion or so superstrings intersect that minute space. The inside surface of a quark appears to move independently of the outside surface creating hyper-dimensional torsion that allows for the formation of wormholes allowing the superstrings to pervade the entire volume of this inner quark-scape. The superstrings sometimes unravel and create the impression of golden highways where trillions of encoded symbols rush down their lengths. It is possible to enter one of the symbols itself and enter another level of quantum reality where particles looking like plasma balls fire out rainbow vibrations in all directions. These plasma balls all appear to emerge from the whiteness and all of them appear to be intrinsically intelligent sub-quark light beings.

The whiteness itself appears as a cylindrical glowing tube that glows almost brightly enough to obscure the “interior”. In places the light reveals particles within that appear to be shaped like a torus (dough-nut shape). They sparkle, glisten and fold in upon themselves in almost inconceivable ways to give the impression of a continuous mutation of form. At this level we are seeing dimensions several billion times smaller than the thickness of the external membrane of a quark. The energy is intense here, and rainbow bolts of lightning appear to be projected out of the torus structures. The arrow of time appears to point in all directions at once and events within some pockets of this reality appear to flow in retrograde. There is enough energy buried in one of these torus structures to provide all the power humanity would ever need. All of the energy of the entire Universe flows through each of these structures and thus they are infinite resources of energy.
Time is inherently bound up with the illusion of the spatial matrix, for it is nothing other than a supplementary construct created by the mind to prevent ‘the box’ filling up with everything at once! Everything can and does happen at once within Singularity Consciousness . Time is another form of contrast that orders perceptions of all kinds of sensual phenomena into a manageable stream, that can then be analysed by the mind. Linear time is an endless, incomplete continuum that always requires another perception in order for its existence to be continued. Thus the mind can never be in the Presence and instead continues to habitually grasp for the next experience.
There is never a completeness of experience, for it is always open ended. One perception leads to another – and another – and so the illusion continues indefinitely. In the awareness of the higher dimensions there is a deeper completeness. Linear time then becomes a circle and transcends its own illusion! In this ‘completion of the circle’ one sees oneself as Source Presence that does not require a location in space-time to exist. In the stepping out of the Presence of Source the wheels of time turn once again!
Physical transmutation of the body (Ascension work) causes our being to move into alternate temporal realities where time appears to run at a much faster rate. This causes all of our karmic processes to speed up and accounts for the experiences of those undergoing all kinds of emotional and spiritual processing in a much shorter time than the conventional norm.
The apparent appearance of accelerated time is due to the contrast between the timeless dimensions and this linear dimension. Our own perceptions of time are influenced by the powerful energies of the higher planes and the stream of higher vibrating energies creates the sensation of altered temporal realities. When this is understood time is then seen to slow down and dilate.
This temporal dilation can allow for some remarkable experiences, such as the ability to teleport 2.4 billion light years or so across space in the blink of an eye (read Keys to Immortality ).
There are no limits beyond the constraints of time and distance and one then becomes an embodied intergalactic traveler, able to traverse the Universe at will. Huge networks of wormholes within 10th dimensional superstrings open up billions of galaxies that can be explored by the higher-dimensional Timeless self.
It is a truly mind-blowing experience to be presented with such an astonishing expansiveness of reality. However, that is the norm in the Universe, and it is only the belief in the limitations of the linear world that we find ourselves confined to one planet amongst a dying species whilst the Cosmos surrounds us waiting to be explored..
About the Author
Free Spirit is a Spiritual Master and a Teacher of Ascension after spending his whole life in pursuit of spiritual understanding. He is also the author of Keys to Immortality (his third book) and has some public discourses on You Tube. He also builds Merkabah structures to enhance dreaming as well as teaching dreaming workshops and providing personal and in depth spiritual mentoring to VIP clients.
+++
ZenGardner.com