Another Suspicious Plane Crash to Boost Globalist Interests in Brazil*

Brazil’s scheduled October presidential election was seen as a virtual cake walk for incumbent President Dilma Rousseff. That was until a plane crash killed Rousseff’s rather lackluster opponent, economist and former governor of Pernambuco, Eduardo Campos. On August 13, it was reported that the plane carrying Campos, a Brazilian pro-business centrist presidential candidate who was running third behind the more conservative Social Democratic Party candidate Aecio Neves, an economist and champion of austerity, crashed into a residential area of Santos in Sao Paulo state, Brazil. Campos was the candidate of the formerly leftist but now «pro-business» Brazilian Socialist Party. As with the British, Australian, and New Zealand Labor Parties, the Canadian Liberal and New Democratic Parties, and the U.S. Democratic Party, corporate and Zionist interests infiltrated the Brazilian Socialist Party and largely transformed it into a «Third Way» pro-business party fraudulently retaining the use of the «socialist» designation.
It is clear that since disclosures of U.S. National Security Agency spying on the e-mail and phones of incumbent Brazilian Workers’ Party President Dilma Rousseff and her ministers, Rousseff’s resultant cancellation of a state visit to Washington, and Brazil’s hosting of Russian President Vladimir Putin and other BRICS economic bloc leaders at a recent summit in Fortaleza, the United States has been trying to destabilize Brazil. The State Department and the CIA have been looking for weak links in Rousseff’s Brazil to create the same conditions of instability they have fomented in other countries in Latin America, including Venezuela, Ecuador, Argentina (through a national credit default engineered by Zionist vulture capitalist Paul Singer), and Bolivia. However, Rousseff, who antagonized Washington by announcing, along with other BRICS leaders in Fortaleza, the establishment of a BRICS development bank to compete with the U.S.- and European Union-controlled World Bank, looked unbeatable for re-election. That certainly was the case until August 13 when Campos and four of his campaign advisers, along with the pilot and co-pilot, were killed in the crash of the Cessna 560XL, killing all on board.
The crash advanced to the head of the Socialist Party presidential ticket Campos’s vice presidential running mate, Marina Silva. In 2010, Silva received a surprising 20% of the vote for president as the Green Party candidate. Rather than run as the Green candidate this year, Silva opted to join Campos’s pro-business ticket. Silva is now seen as the Socialist Party’s best chance to defeat Rousseff for president in the October election. Silva, an evangelical Christian in a largely Roman Catholic country, is also seen as close to the global «civil society» infrastructure of «controlled opposition» groups financed by hedge fund master manipulator George Soros. As a leader of Brazil’s Amazon rain forest protection efforts, Silva has been lauded by environmental groups funded by Soros’s Open Society Institute. Silva’s campaign rhetoric is rife with such Soros code phrases as «sustainable society», «knowledge society,» and «diversity».
Silva marched with the Brazilian team at the opening ceremonies of the 2012 Olympics in London. Brazilian Sports Minister Aldo Rebelo said that Silva’s participation in the Olympics was approved by the British royal family and that she «always had good relations with the European aristocracy».
Silva is also more moderate than Rousseff on Israel’s policies toward Palestine. As an Assemblies of God Pentecostal Christian, Silva is a member of a denomination that provides core membership for the worldwide movement of «Christian Zionists» who are as avidly as pro-Israel as such Zionist Jewish organizations as B’nai B’rith and the World Jewish Congress.
The Assemblies of God believe the following about Israel:

«According to Scripture, Israel has an important role to play in the end-times. For centuries Bible scholars pondered over the prophecy of a restored Israel. ‘This is what the Sovereign Lord says: I will take the Israelites out of the nations where they have gone. I will gather them from all around and bring them back into their own land.’ When the modern nation of Israel was founded in 1948, and Jews began returning from all around the world, Bible scholars knew that God was at work and that we were very likely living in the last days». 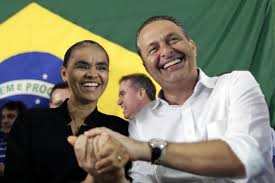 Marina Silva with Eduardo Campos when Campos announced she would be his running mate…
In 1996, Silva was awarded the Goldman Environmental Prize, which was established by Goldman Insurance Company founder Richard Goldman and his wife Rhoda Goldman, an heir to the Levi Strauss clothing company fortune. In 2010, Silva was named by Foreign Policy magazine, edited by David Rothkopf, a former managing director of Kissinger Associates, to its list of «top global thinkers».
The full details of the cause of Campos’s plane crash may never be known. Assisting in the investigation of the crash is the U.S. National Transportation Safety Board (NTSB) and the Federal Aviation Administration. NTSB and FAA investigators will assuredly be in-briefed and out-briefed by CIA officials stationed in Brasilia who will be eager to have a conclusion of «tragic accident» stamped on the final crash report.
The CIA has managed to cover up its involvement in other Latin American aircraft crashes that have eliminated opponents of U.S. imperialism in Latin America. On July 31, 1981, Panamanian President Omar Torrijos was killed when his Panamanian Air Force plane crashed near Penonomé, Panama. After George H. W. Bush’s invasion of Panama in 1989, the Panamanian plane crash investigation documents held by the Panamanian government of General Manuel Noriega were reportedly seized by American military personnel and they disappeared.
Two months before Torrijos was killed, Ecuadorian President Jaime Roldos, a populist leader who stood up to the United States, was killed when his Super King Air plane, operated as a VIP aircraft by the Ecuadorian Air Force, crashed into Huairapungo Mountain in Loja Province. The plane also carried the First Lady of Ecuador and the Defense Minister and his wife. They were all killed in the crash. The plane lacked a Flight Data Recorder, also known as a «black box.» The Zurich, Switzerland police conducted their own investigation that discovered the official Ecuadorian government investigation was seriously flawed. For example, the Ecuadorian government report on the crash failed to mention that the plane’s engines were disabled before the aircraft ploughed into the side of the mountain.
As with Roldos’s plane, Campos’s Cessna did not have a flight data recorder. Moreover, the Brazilian Air Force announced that two hours of audio from the cockpit voice recorder on board Campos’s Cessna do not reflect the conversations between the pilot, co-pilot, and ground control on August 13. The cockpit voice recorder on board the ill-fated Cessna 560XL was manufactured by L-3 Communications, Inc. of New York City. L-3 is a major U.S. intelligence contractor that provides the National Security Agency with much of its undersea cable tapping capabilities through an NSA agreement with L-3’s Global Crossing subsidiary.
Although Brazilian presidential hopeful Campos was no enemy of the United States, his suspicious death a few months before the presidential election and replacement with a darling of the George Soros infrastructure, now poses an electoral threat to Rousseff, who is most definitely considered an enemy by Washington. The U.S. and Soros have been looking for various ways to penetrate and disrupt the BRICS nations. The Soros/CIA attempt to advance Chinese Politburo member Bo Xilai into the Chinese presidency collapsed when he and his wife were arrested and jailed for corruption. With Russia and South Africa off-limits for any similar intrigue, India and Brazil are the focus for CIA and Soros disruption of BRICS. Although Narendra Modi’s right-wing government in India is new, the early signs for BRICS disruption are encouraging. For example, India’s Foreign Minister, Sushma Swaraj, as an outspoken and committed ally of Israel. Brazil under Rousseff is seen by the CIA and Soros as the best opportunity to insert one of their own, in this case, Marina Silva, into the leadership of a BRICS nation in order to exact a «Trojan horse» attack on the increasingly important economic bloc.
The plane crash that killed Eduardo Campos helped advance a George Soros-funded operative closer to the Alvorada presidential palace in Brasilia.
Source*