OUT OF MIND » TRUTH IN CONSPIRACY THEORIES? » HISTORIES MYSTERIES » The 5,000-year-old Pyramid City Of Caral

The 5,000-year-old Pyramid City Of Caral

The 5,000-year-old Pyramid City Of Caral

By: April Holloway. It is widely taught in the field of ancient history that Mesopotamia, Egypt, China, and India, gave rise to the first civilizations of mankind. However, few are aware that at the same time, and in some cases before some of these societies emerged, another great civilization had sprouted – the Norte Chico civilization of Supe, Peru – the first known civilization of the Americas. Their capital was the Sacred City of Caral – a 5,000-year-old metropolis complete with complex agricultural practices, rich culture, and monumental architecture, including six large pyramidal structures, stone and earthen platform mounds, temples, amphitheatre,  sunken circular plazas, and residential areas.
The Supe Valley, which lies 200 miles north of Lima on the Peruvian Pacific coast, was  surveyed in 1905 by the German archaeologist Max Uhle, who revealed the first archaeological discoveries in the area. However, it was not until several decades later that  full-scale excavations took place, revealing the tip of a very large iceberg. In the 1970s, archaeologists discovered that the hills originally identified as natural formations were actually stepped pyramids, and by the 1990s the full extent of the great city of Caral had emerged. But another great surprise was yet to come – in the year 2000, radiocarbon dating carried out on reed carrying bags found at the site revealed that Caral dated back to the Late Archaic period beginning around 3,000 BC.  Caral had now provided the most extensive evidence of an early complex society in the Americas. 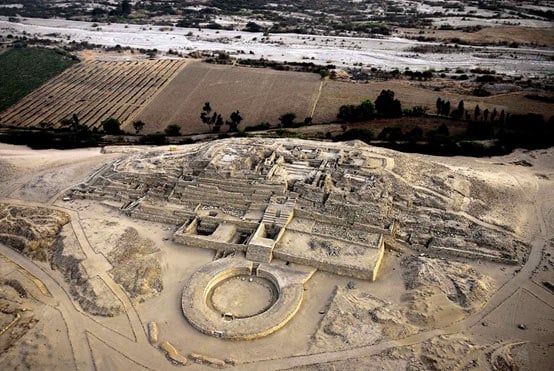 The remains of the Sacred City of Caral, Peru. Image source.
Caral is one of 18 settlements identified in the Supe valley, covering an area of around 65 hectares. It is situated on a dry desert terrace overlooking the lush valley of the Supe River. Exceptionally well-preserved, the site is impressive in terms of its design and the complexity of its architecture. The city’s plan and some of its features, including pyramidal structures and residences of the elite, show clear evidence of ceremonial functions, signifying a powerful religious ideology.

The centre of the Caral complex consists of a central public area with six large pyramids (platform mounds) arranged around a huge plaza. The largest of the mounds, located in a dominating position within the urban plan of Caral, is 60 feet high and measures 450 x 500 feet at the base, covering an area nearly the size of four football fields. From the top of the great pyramid, the rulers of Caral would have been able to monitor the entire city.  A 29-foot wide staircase opens into a series of small rooms, which include an atrium and a sacred altar. The altar room has a small hole in the floor, in which it appears that offerings were once burned. 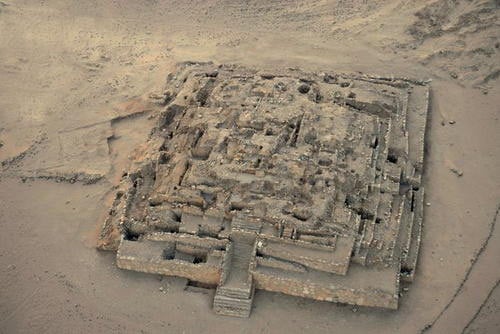 Remains of the Great Pyramid of Caral. Image source: Christopher Kleihege / UNESCO
The public architecture has stairs, rooms, courtyards, an amphitheatre, and three sunken plazas. Accommodation seems to have consisted of large rooms atop the pyramids for the elite, ground-level complexes for craftsmen, and small outlying dwellings for workers. In total, it is estimated that Caral was home to a population of about 3,000 people. Researchers believe the model of the city was used by many civilizations that came after the Norte Chico.
In 2001, the Sacred City of Caral in Supe was inscribed on UNESCO’s World Heritage List.  UNESCO writes:
“The Sacred City of Caral-Supe reflects the rise of civilisation in the Americas. As a fully developed socio-political state, it is remarkable for its complexity and its impact on developing settlements throughout the Supe Valley and beyond… The design of both the architectural and spatial components of the city is masterful, and the monumental platform mounds and recessed circular courts are powerful and influential expressions of a consolidated state.”
Coming Next: Unique artifacts shed light on daily life in Caral
Featured image: The ancient city of Caral. Image source.
Part 2 - Unique artifacts shed light on daily life in 5,000-year-old city of Caral
References:
Exploring the oldest civilization in the Americas – Goshen College
Sacred City of Caral-Supe - UNESCO
Caral: the oldest town in the New World – Philip Coppens
Caral, the oldest city in America – Go2Peru
Caral: (Pyramid Complex) – Ancient-Wisdom
Watch documentary ‘The Lost Pyramids of Caral’.
- See more at: http://www.ancient-origins.net/ancient-places-americas/5000-year-old-pyramid-city-caral-002016#sthash.S4qKZSs1.dpuf

OUT OF MIND » TRUTH IN CONSPIRACY THEORIES? » HISTORIES MYSTERIES » The 5,000-year-old Pyramid City Of Caral