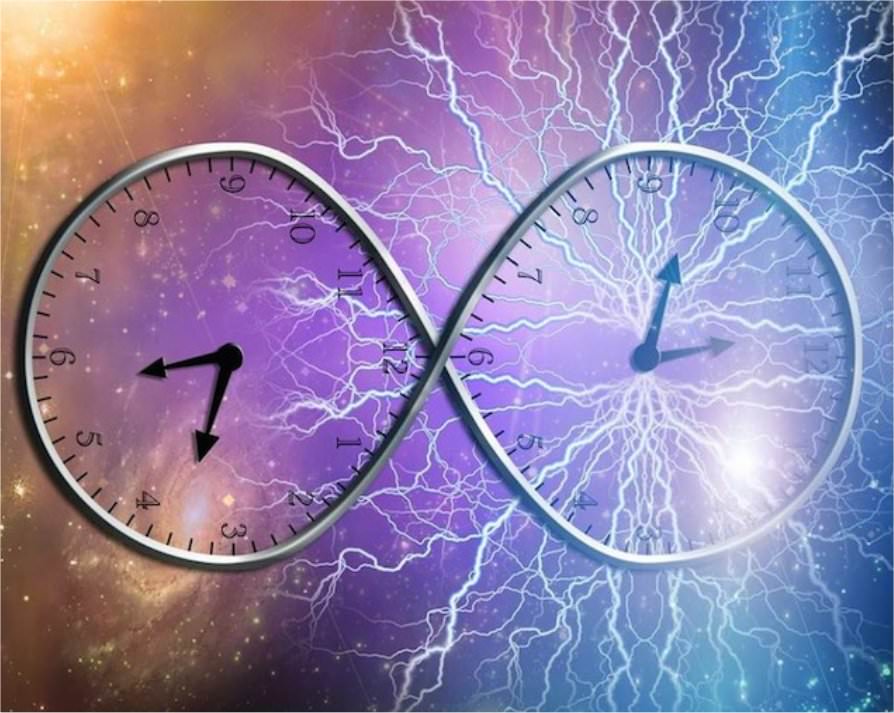 by Josh Richardson
Everything exists in the present moment and it’s a fundamental principle of the Universe that many of our scientists are still trying to grasp. Time does not actually exist and Quantum Theory proves it. There are things that are closer to you in time, and things that are further away, just as there are things that are near or far away in space. But the idea that time flows past you is just as absurd as the suggestion that space does.
The trouble with time started a century ago, when Einstein’s special and general theories of relativity demolished the idea of time as a universal constant. One consequence is that the past, present, and future are not absolutes. Einstein’s theories also opened a rift in physics because the rules of general relativity (which describe gravity and the large-scale structure of the cosmos) seem incompatible with those of quantum physics (which govern the realm of the tiny).
According to Einstein’s special theory of relativity, there is no way to specify events that everyone can agree happen simultaneously. Two events that are both “now” to you will happen at different times for anyone moving at another speed. Other people will see a different now that might contain elements of yours â€“ but equally might not.
The result is a picture known as the block universe: the universe seen from that impossible vantage point outside space and time. You can by all means mark what you think is “now” with a red dot, but there is nothing that distinguishes that place from any other, except that you are there. Past and future are no more physically distinguished than left and right.
The equations of physics do not tell us which events are occurring right now–they are like a map without the “you are here” symbol. The present moment does not exist in them, and therefore neither does the flow of time. Additionally, Albert Einstein’s theories of relativity suggest not only that there is no single special present but also that all moments are equally real.
Some four decades ago, the renowned physicist John Wheeler, then at Princeton, and the late Bryce DeWitt, then at the University of North Carolina, developed an extraordinary equation that provides a possible framework for unifying relativity and quantum mechanics. But the Wheeler-Â­DeWitt equation has always been controversial, in part because it adds yet another, even more baffling twist to our understanding of time.


“One finds that time just disappears from the Wheeler-DeWitt equation,” says Carlo Rovelli, a physicist at the University of the Mediterranean in Marseille, France. “It is an issue that many theorists have puzzled about. It may be that the best way to think about quantum reality is to give up the notion of time–that the fundamental description of the universe must be timeless.”
One might say that when we better understand consciousness we will better understand time. Consciousness is the formless, invisible field of energy of infinite dimension and potentiality, the substrate of all existence, independent of time, space, or location, of which it is independent yet all inclusive and all present. It encompasses all existence beyond all limitation, dimension, or time, and registers all events, no matter how seemingly miniscule, such as even a fleeting thought. The interrelationship between time and consciousness from the human perspective is limited, when in fact it is unlimited.


There Is No Such Thing As Time

» Last Week Tonight with John Oliver: Daylight Saving Time - How Is This Still A Thing?
» Gillian MacBeth-Louthan – You Need To Keep Believing That Peace Comes One Person at a Time, That Light Is Birthed One Thought at a Time, That The Heart Heals One Love At A Time – 18 April 2013
» Quantum Consciousness & The Nature of Time ~ Time In – Time Out – The Torus Effect
»  Message from the Galactic Federation of Light 7/26/12 ‘Time Portal Earth &Time’
» The Next Big Thing