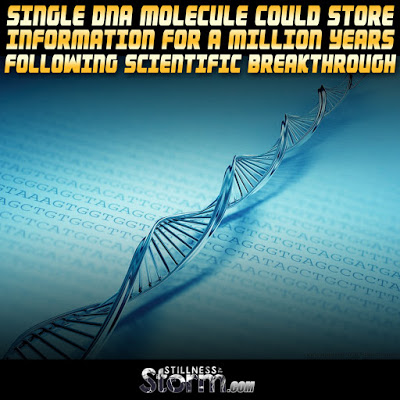 Modern science is just beginning to understand the well nigh limitless potential of biological systems; what we could think of as universal technology. The most powerful computers have always been living organisms, with humanity's capacity for computation at its peak.

A team from the Swiss Federal Institute of Technology has developed a method for encoding digital information into DNA for data storage. The potential for this technology is enormous and it suggest that DNA may already be heavily encoded with information.

The so called 'junk' DNA discussed in modern times may actually be a huge wealth of genetic memory. Although the team did not speculate much on that score, for those who have developed an awareness of the hidden aspects of our world, it seems reasonable to conclude that various entities have already deciphered and used the human organism as an extension of computing technology.

And this is where the discussion of AI infiltration enters the equation. Harald Kautz Vella, a researcher and physicist studying self replicating nanotechnology, states that we have already developed systems for reading and transmitting signals directly do to human organism. These are being blanketed onto populations with nearly 100% exposure rates.

Could this latest breakthrough simply be a mainstream disclosure for what we've already developed many years ago? It could very well be. But given the level of DNA's ability to store information, evidenced by the transmission of immune factors from mother to child, it appears we may already have technology available to tap into these hidden stores of knowledge.


Scientists have developed a way of storing vast quantities of information for up to a million years in a single molecule of DNA.


The breakthrough could lead to digital archives of everything from ancient texts to Wikipedia changes being stored in the form of DNA that could in theory survive for hundreds of thousands of years without any loss of data.

They have also developed a mathematical algorithm normally used in long-distance radio transmissions to eliminate any errors when deciphering the data written in the digital genetic code of DNA.

“We will show how we can use modern chemical and information engineering tools for the safeguarding of actual digital information in the form of DNA,” the researchers told the American Chemical Society meeting in Boston

Dr Grass said that his team has converted 83 kilobytes of text from the medieval Swiss Federal Charter of 1291 and the Methods of Archimedes from the 10th Century into the digital code of DNA based on sequences of four chemical building blocks, the nucleotides A, C, T and G.

“A little after the discovery of the double helix architecture of DNA, people figured out that the coding language of nature is very similar to the binary language we use in computers,” Dr Grass said.
“On a hard drive, we use zeros and ones to represent data, and in DNA we have four nucleotides, A, C, T and G,” he said.

The DNA molecules were synthesised by machine and heated to 71C for a week, which is equivalent to being stored at 50C for 2,000 years, after which it was decoded back into the original text without any errors, Dr Grass told the meeting.

Information archivists have warned that modern forms of data storage, such as magnetic disk drives, are not expected to last more than a few decades. A form of “nanoscopic” storage in the guise of DNA molecules preserved in glass or silica could by comparison last hundreds of thousands of years without loss of integrity, Dr Grass said.


“If you go back to medieval times in Europe, we had monks writing in books to transmit information for the future, and some of those books still exist. Now, we save information on hard drives, which we wear out in a few decades,” Dr Grass said.

DNA has the advantage over hard drives in that it is an extremely dense form of data storage with the potential to survive for long periods of time. An external hard drive for instance is about the size of a paperback book, can store about five terabytes of data and might last 50 years.

In contrast, an ounce (28 grams) of DNA could fit on a penny, store 300,000 terabytes of memory and palaeontologists have shown the information stored in DNA recovered from fossils can survive for up to a million years.

One of the remaining problems, other than the currently exorbitant cost of making DNA for digital storage, is to be able to retrieve the information quickly and easily, which is why Dr Grass is working on a method of labelling specific places on the DNA molecule to make it easier to search.

“Right now, we can only read everything that’s in the drop. But I can’t point to a specific place within the drop and read only one file,” he said.