UFO Hits Earth – Whilst Strange Metal Orbs Are Falling Around Us? 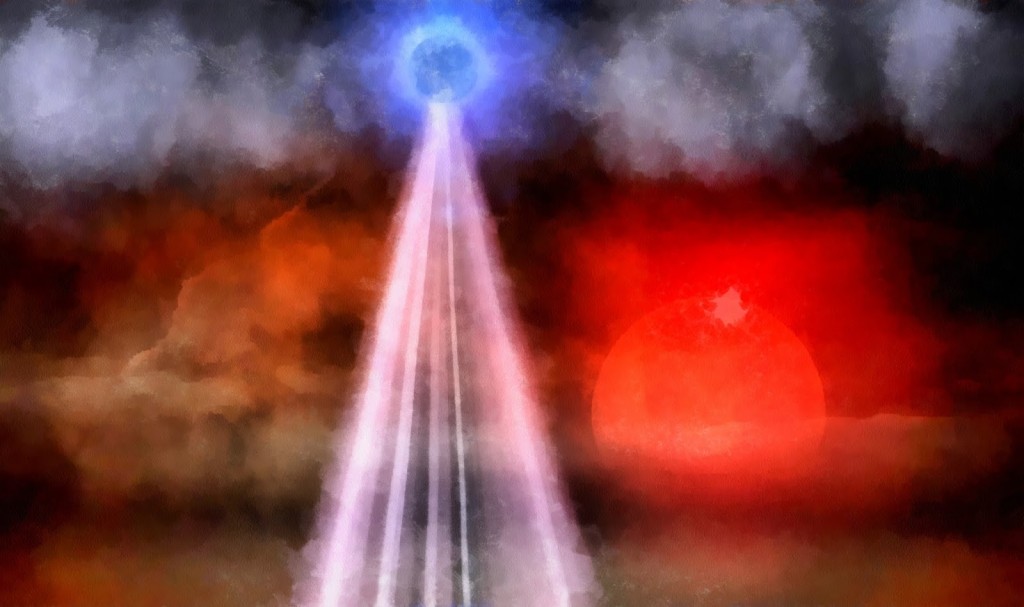 Art by Rapheal Terra @http://ufoartist.blogspot.co.uk/
A UFO dubbed “WTF” crashed into Earth last week (14th November 2015) but scientists have still not been able identify exactly what it was. At first we were told that this was ‘space junk’ but now even the Scientists are scratching their heads over what this object was.
The unknown object had burned up in the atmosphere in the morning, with some reports suggesting it had caused an incredible sonic boom.
It has been suggested that this object could have been caused by remnants of an Apollo rocket, although many people believe that this strange orb like UFO could actually be of an Alien origin. 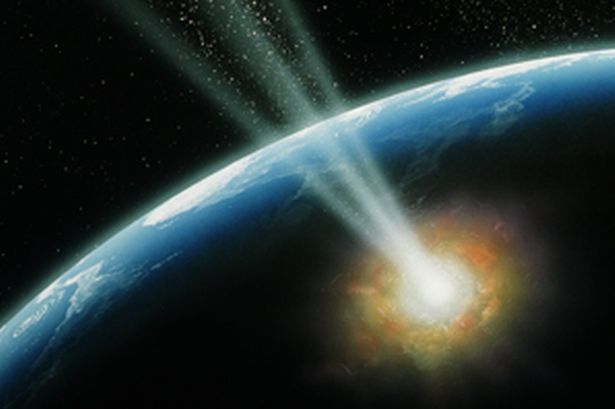 Strange objects hitting earth
Many people around the world were out in force to see what was about to come through the skies today, but unfortunately nothing was seen, in fact the object burned way up in the high before anybody could see it (apparently).
The object is/was called WT1190F and was about two metres wide and hollow – suggesting it is of artificial origin.  It entered Earth’s atmosphere just after 6am in the skies over the southern coast of Sri Lanka.
It has been suggested that the unknown object was part of a spaceship, that had broken away, but this has still not been confirmed.  Strangely a Sonic boom was head at the time of impact in the earths atmosphere, but nothing was seen by any of the members of the public below.

Then there were FOUR more…. 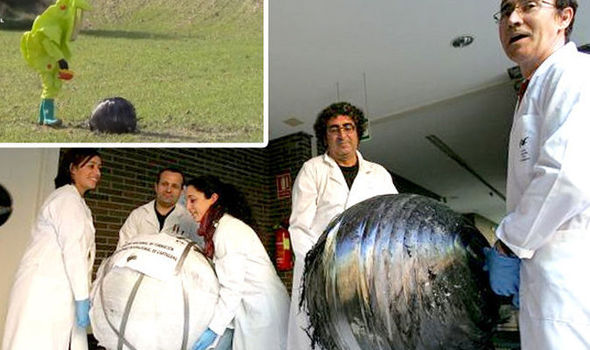 Four mysterious Orb like metallic UFOs have fallen to earth and landed in different countries.
It was also reported in the same week how a week ago a strange 20kg orb like object was found in a remote field in the village of Calasparra in Murcia, Spain, the same day as another bizarre round object was found at the Black Sea coastal town of Sakarya Karasu, which is 1,500 miles away in Turkey. Then it emerged villagers of Villavieja just a stone’s throw from Calasparra reported another one turning up on Tuesday.
It was also reported locally that a third object was found in Spain – which makes it FOUR in total which includes the Turkish incident.
Apparently at the third incident in Spain, Special agents arrived at the scene to investigate the strange circular object.  The object was discovered on Tuesday in Elda in the neighbouring region of Valencia, where a farmer found a long, metal-like object in his field and then called the police.
With these strange objects falling across the sky around the world, NASA did their normal thing of trying to calm the situation down by explaining that “more than 500,000 pieces of space debris are orbiting Earth, with bits of space junk falling to Earth every year”.  But hey what else would NASA say or suggest! 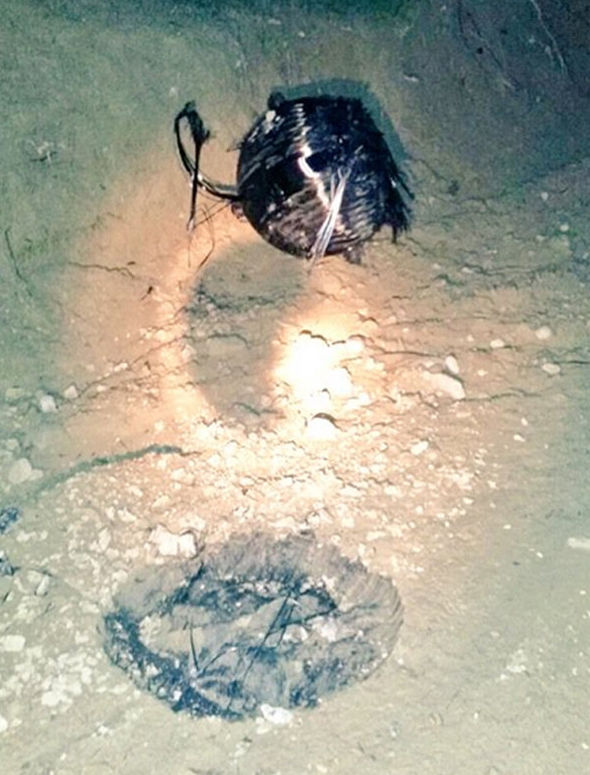 Impact: Crater where on of the Spanish orbs landed
Even José Vélez, the worried mayor of Calasparra said: 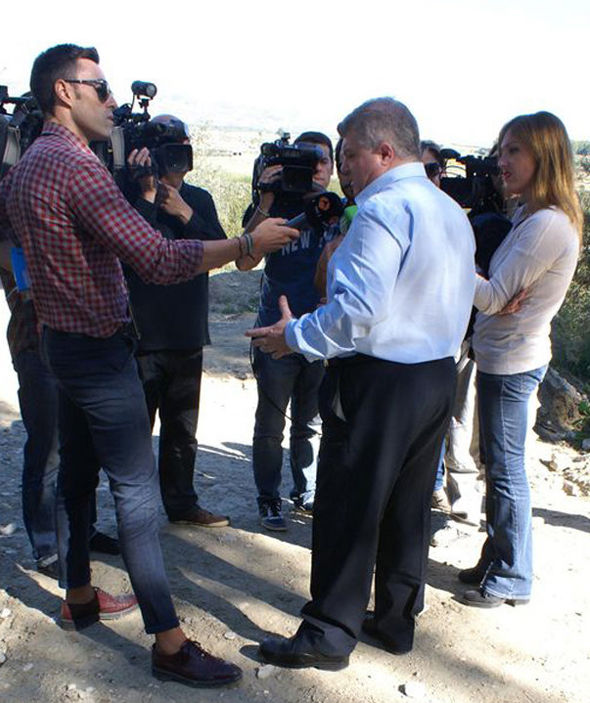 A worried Mayor
Very strangely local farmers in the area had reported seeing at least seven or eight FIREBALLS streaming across the night sky – before the discoveries and fuelling speculation more orbs may have been found.
The civil guard sealed off the area and guarded the orb until investigators arrived to take the second away for more examination – some locals had suggested that men in dark suits had arrived at the scene! 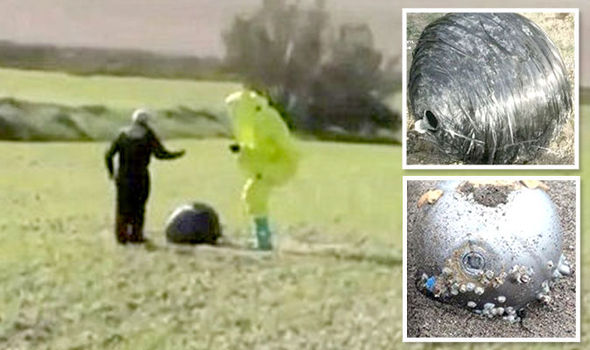 The orb found in Turkey and (inset) officer in biohazard suit inspects one in Spain
U.I.P SUMMARY –  So many strange objects falling from the sky but nobody has a  clue what they actually are.  Perhaps they are part of a spaceship or an aging satellite – but surely if they were just that, one of the leading scientists in one of the top space agencies would know exactly what these are – considering NASA and other space agencies closely monitor space ‘junk’ daily!?
One leading researcher mentioned that these could be the ‘Orbs’ in the sky that a lot of us are seeing more and more of nowadays – perhaps they had gone past their sell date.
The silence from the likes of NASA and the European Space Agencies makes me wonder whether they actually know what these strange objects are.
We will keep you updated on this strange story – Strange yet exciting times lie ahead.
MWV – U.I.P

Posts : 118
Join date : 2012-10-19
Location : Inbetween dimensions
We had a metal orb land in Maryland when i lived there. We were told it was used by the military to calibrate for submarines... Good cover story no?  VK

» Acid Rain falling over Hawaii - Green leaves falling off trees - LAVA falling
» Accountability – Hold On To Your Hats! The Dominoes Are Falling … and Falling and Falling
» Physicists Discover New Type of ‘Strange Metal’
»  More Strange Metal Boxes Along Coastal Beaches
» Grant Cameron - Incredibly Strange Pieces of Metal From UFOs... WHY ARE THEY GIVING US GIFTS?