This extremely long UFO was found by MexicoGeek of Youtube. He found it using Google Sky map, its part of Google Earth, Mars, and moon view. Its a free application so try it sometime.

The size of this is difficult to measure, but it may be miles or more across to be seen from such a great distance.

This is actually one thick disk UFO, but seen here in three places because it moves so fast. Its speed is faster than the shutter speed of the video camera and this is why its actually caught three times...not one long UFO with three bumps.
Incredible speed. Caught by Streetcap1 of Youtube.
Scott C. Waring
www.ufosightingsdaily.com

Streetcap1 of Youtube states:
What are these? Well your guess is as good as Nasa's - or do they know already?

Witness, resident of Leadville, Co states: I was photographing old mines and Fall foliage between Leadville and Mt. Democrat on a clear afternoon (9-12-15).

The object appeared in one in a short series of photos taken at the site of an abandoned mine dump and mill.

It was between 5 and 10 mile from me and from the perspective of the photo, I would estimate its length at several football fields. The object may have been cloaked to the human eye. It the actual image it is barely visible. 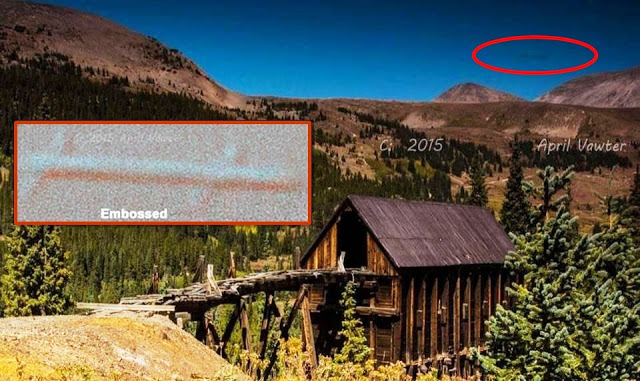 The camera was a Nikon D7200, the newest model in the series, which, because it eliminates the high-pass filter, may pick up more of the infra-red spectrum. Looking at the photo, and object, it almost appears cloaked.

When the object is subjected to the Photoshop "Emboss" filter, its shape is readily apparent as a cylinder or cigar with four uniform rounded appendages...two near each end. The embossed image gives strong detail in terms of shape and configuration.

I didn't "feel" anything at the time, although, with other sightings I have had, I felt calm and reassured by their presence...never threatened.

Mount Democrat is a high mountain summit in the Mosquito Range of the Rocky Mountains of North America. The 14,155-foot (4,314 m) fourteener is located 5.4 miles (8.7 km) northwest (bearing 313°) of the Town of Alma, Colorado, United States, on the Continental Divide separating San Isabel National Forest and Lake County from Pike National Forest and Park County.