OUT OF MIND » CHANGING ENVIRONMENT & NATURE » EARTH CHANGES » Flooding brings Indonesia to it's knees and the worst is yet to come!

Flooding brings Indonesia to it's knees and the worst is yet to come!

One million displaced 50 dead and thousands of homes destroyed: Flooding brings Indonesia to it's knees and the worst is yet to come! 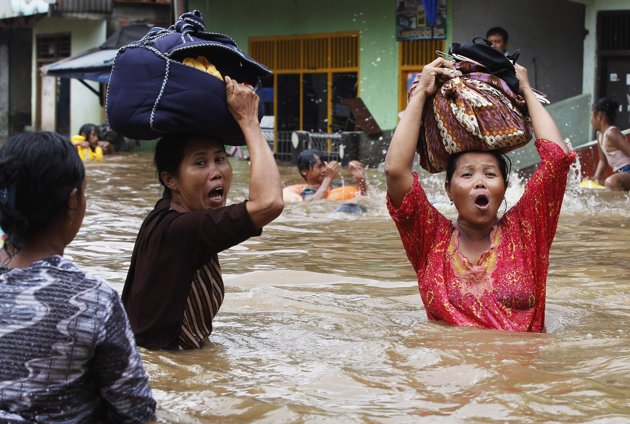 Photo midnightvisitor.wordpress.com
Indonesia’s Nasional Disaster Management Authority (Badan Nasional Penanggulangan Bencana – BNPB) says that the influence of El Niño delayed the start of this year’s rainy season.
January would normally see the peak of the rainy season, but this year the worst may yet be still to come.
Despite the later onset of the rains, BNPB report that between 01 January and 12 February, there have been floods, landslides, and tornadoes in 290 districts or cities in Indonesia.
The severe weather events have left 45 people dead, 48 injured, nearly one million displaced, and thousands of homes destroyed.
Thousands of residents were forced to leave their homes amid flooding caused by heavy rain across Greater Jakarta on Saturday night, while a toddler died on Sunday after falling into the Cendrawasih River in West Jakarta.
The Meteorology, Climatology and Geophysics Agency (BMKG) previously predicted that the peak of the rainy season would occur between Feb. 22 and Feb. 28.
Heavy and prolonged rain from Saturday night until noon on Sunday caused flooding citywide. According to data from the Jakarta Disaster Mitigation Agency (BPBD), West Jakarta was worst affected by the rain, with flooding in 27 areas throughout the municipality and hundreds of residents temporarily evacuated. BPBD spokesman Bambang Suryaputra said the KFT housing complex in Cengkareng Barat, which is privately managed, was among the areas that observed the worst flooding, with up to 70 centimeters of water.
Bambang said about 250 residents left their homes, taking shelter in nearby mosques and setting up a communal kitchen.
Bambang said the flooding in the residential area was due to the low capacity of pumps in the complex. South Jakarta, Bambang added, was also hit hard, with some areas seeing flooding of up to 1 meter.
The Grogol River, which passes through several neighborhoods in Pondok Labu and Lebak Bulus, South Jakarta, burst its banks and caused severe flooding.
Although the water had receded by noon, dozens of houses were left inundated and some residents were evacuated to nearby mosques while others chose to stay on the second floor of their homes. "Currently, we have the situation under control.
Unfortunately, one resident died this morning after falling into a river," Bambang said on Sunday afternoon.
A 21-month-old toddler died early on Sunday after falling into the Cendrawasih River. Cengkareng Police criminal reserve unit chief Adj. Comr. Mohammad Taufik Iksan said the toddler was playing with his older sister in the kitchen of their home, which is situated on a riverbank.
A door leading to the river was left open, and the toddler slipped and fell into the water, which was flowing strongly after the downpour.
The toddler, he said, was carried by the current and was found 2 kilometers from where he fell. Taufik said the child was unconscious when he was found, and was quickly taken to the Cengkareng community health center (Puskesmas). "He was taken to the Cengkareng Puskesmas.
Unfortunately he could not be saved," Taufik said.
Neighboring cities also experienced flooding, including Bogor, Depok and Bekasi in West Java. Antara news agency reported that Situ Gede Lake in Bogor overflowed and inundated dozens of homes.
Situ Gede subdistrict head Junaidi said the lake overflowed due to heavy rain, which occurred from early morning until afternoon.
The flooding, he said, reached up to 80 centimeters in depth on the nearby Jl. Tambakan.
The heavy rainfall also caused landslides in several areas such Bubulak and Tanah Sareal, but the five victims involved only suffered minor injuries.
Several areas in Bekasi were also inundated as a result of heavy rain in Bogor, including high-income housing complexes Pondok Gede Permai and Pondok Mitra Lestari. Bekasi BPBD head Heri Ismiradi said residents did not seek refuge but moved their belongings to the upper floors of their homes, and parked their vehicles in dry places.
Jakarta Governor Basuki "Ahok" Tjahaja Purnama said on Thursday that Jakarta's floods could only be solved with pumps and a giant sea wall.
The city is currently holding a tender for phase A of the National Capital Integrated Coastal Development (NCICD) plan, involving a 4-kilometer sea wall.
When asked about stopping land subsidence, which many experts say is caused by groundwater extraction, Ahok said it would be difficult to force commercial buildings to stop using groundwater.

OUT OF MIND » CHANGING ENVIRONMENT & NATURE » EARTH CHANGES » Flooding brings Indonesia to it's knees and the worst is yet to come!