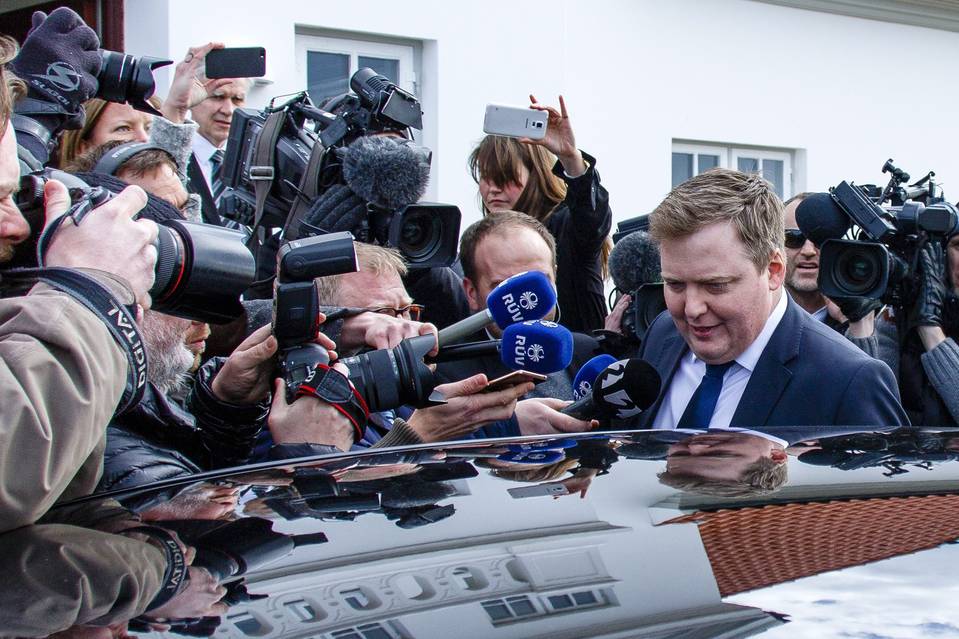 Iceland's Prime Minister Sigmundur David Gunnlaugsson leaves the president’s residence on Tuesday, when he resigned in the face of public outrage over his links to an offshore company.    Photo:  birgir por hardarson/European Pressphoto Agency

Mr. Gunnlaugsson is leaving office amid growing popular uproar in his small island country over him not disclosing links to an offshore company in a Caribbean tax haven.

After a meeting with Mr. Gunnlaugsson and other members of the ruling Progress Party, Agriculture Minister Sigurdur Ingi Johannsson told Iceland television he was considering taking over as prime minister.

After his name appeared in some of the leaked Panamanian documents, Mr. Gunnlaugsson said he shared ownership of a holding company registered in the British Virgin Islands with his partner until 2009, when he sold her his interest for the symbolic sum of one dollar. Mr. Gunnlaugsson has denied any wrongdoing, saying holdings in the company, known as Wintris, were duly reported to Iceland’s tax authorities. 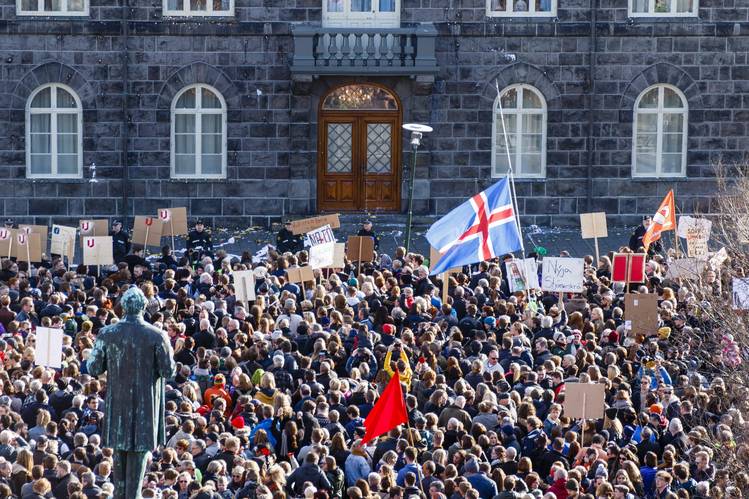 People gather during a protest on in front of Iceland’s parliament in Reykjavik on Monday night, calling for the resignation of Mr. Gunnlaugson’s resignation.    Photo:  birgir por hardarson/European Pressphoto Agency

Icelanders expressed outrage over the news that Mr. Gunnlaugsson had links to an offshore company and hadn’t made the investment public, either when he became a lawmaker in 2009 or when he became prime minister in 2013.

Thousands of protesters outside parliament on Monday night banged drums and chanted that Mr. Gunnlaugsson should quit.

“He told us to believe in Iceland,” Sigmundur Halldorsson, a 49-year-old Reykjavik-born web developer, said by telephone. “But at the same time he decided Iceland was not a very good place to keep his money.”

The Panamanian documents were first leaked to German newspaper Süddeutsche Zeitung, which shared it with other media outlets that published findings on Sunday night on the alleged offshore holdings of a range of business and public figures across the globe.

The revelations come at a delicate time for Iceland, where Mr. Gunnlaugsson’s government was plotting a course toward ending financial restrictions introduced after the 2008 collapse of the nation’s three main banks.
The fall of the banks hit the average Icelander hard as inflation soared to 18% annually and the cost of widely held inflation-linked mortgages rose; people spent less, economic growth stalled, and many jobs disappeared. Capital controls had to be imposed to steady the currency by restricting what funds could exit and leave the country.
The leaked documents also showed that Finance Minister Bjarni Benediktsson and Interior Minister Olof Nordal also had connections to offshore companies.

A spokesman for Mr. Benediktsson confirmed he owned a third of a Seychelles-based company with two other investors set up to invest in a property deal in Dubai, which he said fell through in 2008.

A spokeswoman for Interior Minister Olof Nordal said she had no immediate comment.

“Living conditions have become much harder in Iceland,” said Eva Joly, a French-Norwegian member of the European Parliament. “The idea that the prime minister, the finance minister and the interior minister didn’t play by the rules is unbearable.”

A former investigative magistrate in France, Ms. Joly advised Iceland’s judicial authorities from 2008 to 2011 on how to prosecute executives at the country’s failed banks. Several high-profile bankers have been convicted as the result of protracted investigations that uncovered widespread market manipulation.

Ms. Joly said it was shocking to hear Mr. Gunnlaugsson had set up an offshore company.

“There is a negative preconception because he would need very good reasons to explain why he couldn’t set up a company elsewhere than in a tax haven,” Ms. Joly said.

"this is a private matter"

Actually comrade dave, EU provincial Governor and holder of empty title Queens first Minister and Lord of the Admiralty this is a very public matter.

Comrade daves dictatorship has smeared unemployed people and disabled people as scroungers, spongers, workshy (a favourite term in 1930's Germany) for taking financial help from the state as after rigorous and draconian medical testing (banned by American courts).

Daves regime has seen nearly 30 suicides a week for years due to this victimisation.

The comrades chancellor Gideon George Osborn has a family company selling very expensive tacky wallpaper to other inbred chinless wonders, yet this company has avoided paying even one penny in corporation tax since Gideon was anointed as chancellor six years ago.

These hypocrites suffering from not only a successful personality bypass but an ingrained sense of entitlement along with a massive superiority complex are being revealed for the crass repellent vericulum they are. This is very much a public matter when the Provincial EU Governor and his Chancellor are having a race to the bottom in terms of which local council they can starve of fund first and make bankrupt, causing homelessness, death, hardship, and misery by official policy, vote themselves a £10,000 rise in salary while cutting everyone elses and are found to be fully supportive of cheating the country of income, including immediate close family involvement.

The pending referendum to get out of the fourth reich known as the EU has a great chance of being a display of disgust with these weapons grade cretins. The timing of various releases of such information is wonderful to behold.

Regardless of the motive in the US (to cast yet more shade on Putin) and the lack of hack for those here involved, I am really hoping that the Americans get their acts together and go all Iceland on our own whip crackers and thieves!

I think this time the revolution will be televised!


I think this time the revolution will be televised!

I think it already is.....what is "exposed" is merely what the MSN is allowed to say.

We are seeing the dominoes falling

Posts : 1417
Join date : 2014-01-03
Location : England
I see way to much of these pair of spiritual illiterates in the image above......they are a perfect example, worthy of teaching purposes of what happens when.....someone loses their soul and connection to humanity