Over 82,000 people have been forced to evacuate their homes in San Bernardino County, California, due to threats posed by a rapidly spreading wildfire east of Los Angeles.

The governor of California, Jerry Brown, declared a state of emergency on Tuesday as around 34,500 buildings were being threatened.
Sponsored by Revcontent

Press TV reports:
The wildfire, which began on Tuesday in Southern California’s Cajon Pass, has so far spread to 18,000 acres and chased 82,000 residents from their homes in less than 12 hours.
“It is a very fast-moving fire, it has wind behind it,” said US Forest Service spokeswoman Lyn Sieliet.
The Blue Cut fire, fed by strong winds, bone-dry brush and 100-degree temperatures, has scorched hills, canyons and flatlands.
“We know that we’ve lost structures, it’s unknown how many at this time,” said San Bernardino County Fire Department public information officer Tracey Martinez. “This fire is still raging out of control.”
The fire “is burning in significantly different terrains at multiple elevation levels,” making it difficult to fight it, said Eric Sherwin of the San Bernardino County Fire Department.
Another fire began Saturday in the foothill community of Lower Lake some 130 kilometers (80 miles) north of San Francisco.
The blaze, which has been fueled by fierce winds, had burnt about 4,000 acres (1,600 hectares) by late Monday afternoon.
Damin Pashilk, 40, was arrested on Monday and faces 17 counts of arson over the destructive Clayton Fire, which is one of a dozen major wildfires across the drought-hit US West.
California is undergoing its fifth year of a record drought and is being hit by an extreme heat wave. 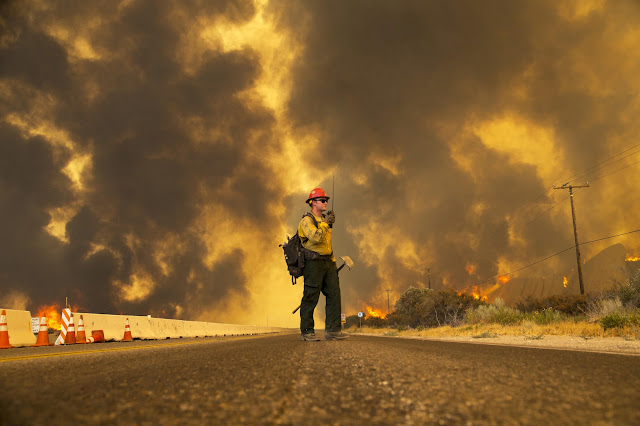 Photo www.latimes.com
California's newest huge wildfire advanced on thousands of homes Wednesday, feeding on drought-stricken vegetation and destroying an untold number of structures as it expanded to nearly 47 square miles.
CBS Los Angeles reports the fire sweeping San Bernardino County is zero percent contained.
Flames from what has been dubbed the Blue Cut Fire climbed the flanks of the San Gabriel Mountains toward the town of Wrightwood, where authorities said that only half of the community's 4,500 residents have complied with evacuation orders.
Officials estimated that more than 34,000 homes and some 82,000 people were under evacuation warnings.
"This is not the time to mess around," said Battalion Chief Mark Peebles of the San Bernardino County Fire Department.
"If you are asked to evacuate, please evacuate."
Less than 24 hours after the blaze began 60 miles east of Los Angeles, the fire command assembled a fleet of 10 air tankers, 15 helicopters and an army of 1,300 firefighters, many of them just off the lines of a wildfire that burned for 10 days just to the east.
At a dawn briefing, half the firefighters raised their hands when an official asked how many had just come from the earlier blaze, part of a siege of wildland infernos up and down California this year. The fire erupted late Tuesday morning in Cajon Pass, a critical highway and rail corridor through mountain ranges that separate Southern California's major population centers from the Mojave Desert to the north.
The blaze is also scorching parts of historic Route 66, including burning down a famous diner, CBS Los Angeles reports. 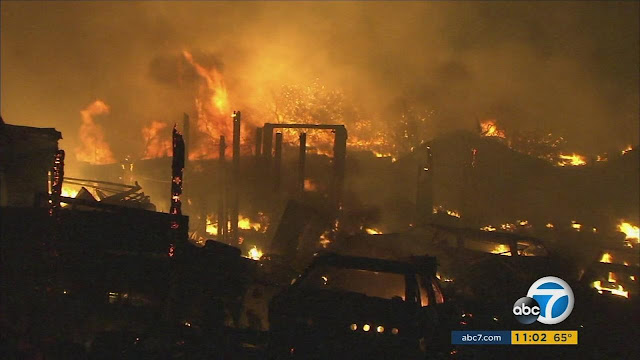 Photo abc7.com
The Summit Inn was a familiar sight for drivers traveling between Los Angeles and Las Vegas.
The roadhouse was linked to many legends, including one about Elvis Presley.
It was said the singer stopped at the Summit Inn, and kicked the jukebox after he saw it contained none of his records.
The establishment survived a catastrophe two years ago, when a drunk driver crashed into the building.
New owners had recently taken over the Summit Inn, promising a restoration.
Elsewhere, countless big rigs were parked on both sides of the pass, waiting for Interstate 15 and a web of other roads to reopen.
Alternate routes involved significant detours.
The pass is a major route for travel from the Los Angeles region to Las Vegas and also carries significant daily commuter traffic for high desert residents.
The speed of the fire's spread astonished those in its path.
"This moved so fast," said Darren Dalton, 51, who along with his wife and son had to get out of his house in Wrightwood.
"It went from 'Have you heard there's a fire?' to 'mandatory evacuation' before you could take it all in. This is a tight little community up here.
Always in rally mode.
Suddenly it's a ghost town."
Hundreds of cars packed with belongings and animals left the town.
The air for miles around the blaze was filled with smoke.
The sound of explosions - possibly from ammunition stored in homes - could be heard in the distance.
Shannon Anderson of Blue Mountain Farms horse ranch in Phelan had to evacuate 40 horses as the fire approached.
"It's raining ash," Anderson said, breathing hard.
The fire erupted in a landscape ready to burn after years of drought.
The weather at the time was hot, dry and windy - conditions not expected to begin easing until late Thursday or Friday.
Devouring ranchlands, the blaze surged west to the Los Angeles County line and north to the Mojave Desert.
Eric Sherwin of the San Bernardino County Fire Department confirmed Tuesday night that the flames had burned at least a dozen buildings, some of them homes.
"I'm looking up here and I'm seeing buses.
I'm seeing outbuildings.
I'm seeing houses," he said.
The blaze was among several large fires burning up and down California, from Shasta County in the far north to Camp Pendleton Marine base in San Diego County.
It came after several steady weeks of major fires around the state, even though the full force of the traditional fire season has yet to arrive.
Gov. Jerry Brown declared a state of emergency in the area within hours of the latest fire breaking out, a move that more often comes after a blaze has done several days of destruction.
Six firefighters were briefly trapped by flames at a home where the occupants had refused to leave, forcing the crew to protect the house, fire officials said.
"We were fully engulfed in smoke," firefighter Cody Anderson told CBS Los Angeles.
"It was really hard just to see your hand in front of your face."
"We just hunkered down and sat there and waited for the fire to blow over," he said.
Anderson and another firefighter were treated for minor injuries.
As that fire surged, a major blaze north of San Francisco was fading, and about 4,000 people in the town of Clearlake were allowed to return home.
Their relief, however, was tempered with anger at a man who authorities believe set the blaze that wiped out several blocks of a small town over the weekend along with 16 smaller fires dating back to last summer.
Investigators in Northern California said Tuesday that they had been building a case against the suspected arsonist, 40-year-old construction worker Damin Anthony Pashilk, for more than a year. But they did not have enough evidence to make an arrest until the weekend.
The blaze ripped through Lower Lake.
The fire destroyed 175 homes and other structures in the working-class town of Lower Lake.