OUT OF MIND » THE INSANITY OF REALITY » VACCINE TRUTHS: MEDICAL INDUSTRY LIES » State Bill to Mandate Children to Receive Every Vaccine — Citizens Fighting Back


Oklahoma State senator and physician, Ervin Yen won’t give up his personal vendetta to force all Oklahomans to vaccinate their children. For the third year in a row, Yen has introduced a bill requiring all children in the state to be vaccinated, with the only exception being children who already have a serious medical condition.
Yen’s fear is that students won’t be vaccinated (even though OK already has a 90 percent compliance rate), and an outbreak will occur — killing thousands of the state’s schoolchildren. “I’m worried about those kids who are immune compromised, who cannot be vaccinated, I don’t want them going to school and being exposed,” said Yen. He’s urging his colleagues to bring Senate bill 83 to a vote. “I’d like to get it passed right away before we have a huge outbreak and a lot of people die,” said Yen.
Yen’s is just the latest exhibition of the corporatocracy at work. The melding of big pharma with government is almost imperceptible but present nonetheless. After all, who doesn’t want all children to be healthy?
Dr. Yen pointed to the occurrence of over 300 cases of the mumps in Oklahoma in 2016 as proof more needs to be done to vaccinate all Oklahomans. But maybe Dr. Yen needs to peruse the archives of The Free Thought Project. Maybe then he’ll learn the scientists behind the MMR (measles, mumps, and rubella) vaccine actually lied about the safety and efficacy of the shot. They knew all along the vaccine caused Autism and they lied and covered up the facts. No one would have ever known the truth had one CDC doctor not blown the whistle.
Center For Disease Control Dr. William Thompson apologized for covering up the results of his study, saying he’s now wrecked with “shame” that he bears daily. He said in a statement, “I regret that my coauthors and I omitted statistically significant information in our 2004 article published in the journal Pediatrics. The omitted data suggested that African American males who received the MMR vaccine before age 36 months were at increased risk for autism. Decisions were made regarding which findings to report after the data were collected, and I believe that the final study protocol was not followed.”

So, who should Oklahomans believe, the Center For Disease Control doctor who blew the whistle and admitted the MMR vaccine causes autism in Black children, or the politician who’s promoting more vaccines be forced on the citizens? Just like the protesters who forced Dr. Thompson to come clean and tell the truth, we at The Free Thought Project want to know the truth.
Going further, Thompson admitted he and his fellow researchers at the CDC destroyed damning evidence which would show the MMR vaccine actually caused autism, something thousands of American parents attributed as the cause of their children’s autism. He wrote, “The authors of the study decided not to disclose to the public that African American boys under two were more susceptible to developing autism or autism-like symptoms from the MMR vaccine.”
The CDC senior vaccine researcher explained what happened next. “The remaining four coauthors all met and brought a big garbage
image: http://thefreethoughtproject.com/wp-content/uploads/2017/01/yen.jpg 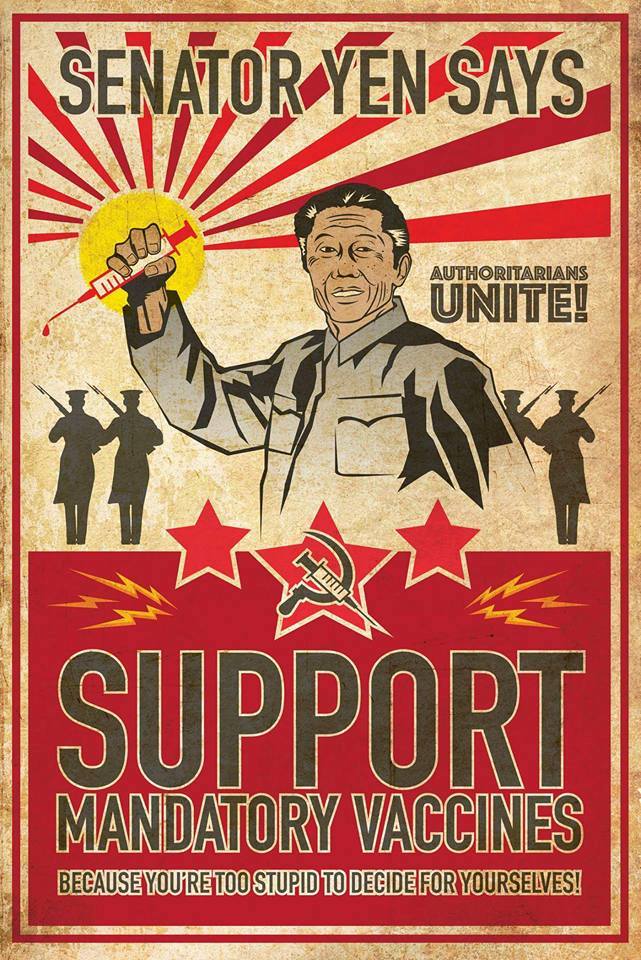 can into the meeting room and reviewed and went through all the hard copy documents that we thought we should discard and put them in a huge garbage can,” he said. But, apparently, he still had a conscious and decided to keep hard copies in his possession.
Thompson wrote, “However because I thought it was illegal and would violate La Jolla and DOJ requests, I kept hard copies in my office and retained all associated computer files. I believe that we intentionally withheld controversial findings from the final draft of the pediatrics paper.” No wonder the American people has lost so much trust in so-called authorities. For decades the CDC has held itself up as beholding to the highest standards for truth and equity, but recent scandals and revelations such as Thompson’s have touched a nerve with some who are now demanding the truth from those in positions of authority.

Pushing back against Senator Yen is the group Oklahomans for Vaccine and Health Choice-PAC. They’ve invited producer and filmmaker Del Bigtree to come to a planned rally (Feb. 7-8) against Yen’s legislative overreach. The bill, if it becomes law will essentially force all Oklahoman schoolchildren to take the shot, and literally drive up rates of Autism, especially within the Black community. But that’s just one fear from one inoculation.
image: http://pixel.watch/qut7

OUT OF MIND » THE INSANITY OF REALITY » VACCINE TRUTHS: MEDICAL INDUSTRY LIES » State Bill to Mandate Children to Receive Every Vaccine — Citizens Fighting Back

» Navy SEALs fighting vaccine mandate secure victory but the fight isn’t over
» Dozens of Massachusetts State Troopers Resign Ahead of Deadline for State’s Mandatory Vaccine Mandate
» French Citizens Riot in Response to Plan to Mandate Vaccine Passports
» “We Will Not Comply!”…3M Employees Protest and Will Not Back Down To Vaccine Mandate
» NY Business Owners Fight Back Against ‘Unscientific and Arbitrary’ Vaccine Mandate