The City That Remembers Everything 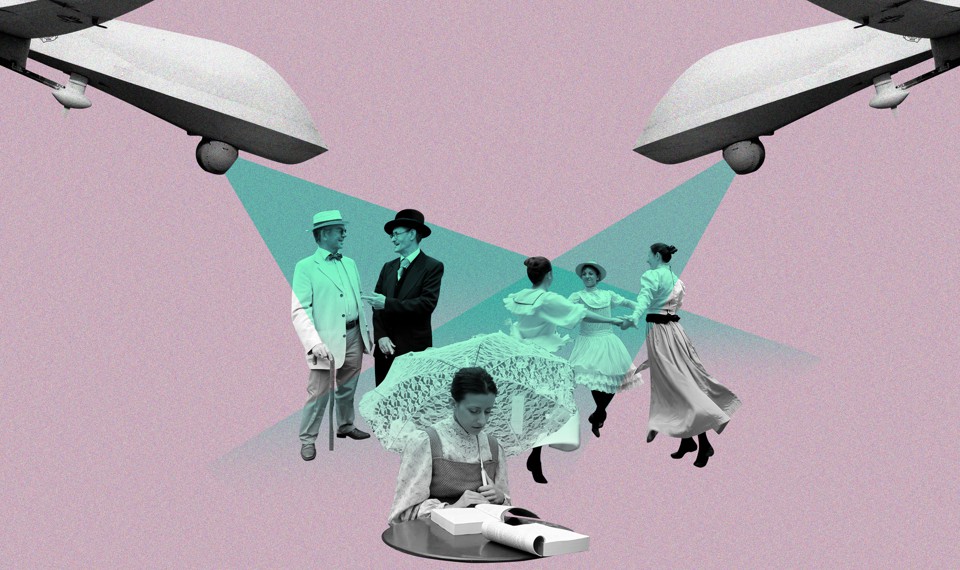 The City That Remembers Everything

The smart city is moving beyond cameras and microphones to stranger surveillance tools.

The most impressive technical feat of James Joyce’s novel Ulysses is that it manages to record nearly every detail from a day in the life of the book’s protagonist, Leopold Bloom, and to elevate those events to the status of literature. Mythology, even. Readers track Bloom’s journey step by step, as he navigates the labyrinthine streets, pubs, and offices of Dublin, yet Bloom’s errands bear the symbolic weight of The Odyssey. Ulysses battled his way from island to island, fighting witches and monsters, but Ulysses suggests that modern, urban lives might be just as significant.

Recording stray thoughts, private conversations, newspaper headlines, and even an amorous act in the bedroom, Ulysses functions as a super-catalog of the mundane. Joyce’s approach—a persistent surveillance of events in Dublin on the date of June 16—implies that a larger story remains hidden in a plain sight, an explanation that might finally make sense of the world, lurking in the data of everyday life. We just need to capture and record that data.

Joyce allegedly had larger ambitions than merely crafting a novel. According to his friend, the writer and artist Frank Budgen, Joyce wanted Ulysses to be so exhaustively detailed that it might operate as a kind of literary hologram. In his own words, “I want to give a picture of Dublin so complete that if the city one day suddenly disappeared from the Earth it could be reconstructed out of my book.” It is literature as 3-D point cloud: a total model of the metropolis and an infinite archive of everything that takes place inside of it.

There are other ways to capture a city. In 2009, the U.S. military revealed the use of a new surveillance tool called Gorgon Stare. It was named after creatures from Greek mythology that could turn anyone who made eye contact with them to stone. In practice, Gorgon Stare was a sphere of nine surveillance cameras mounted on an aerial drone that could stay aloft for hours, recording everything in sight. As an Air Force major general explained to The Washington Post at the time, “Gorgon Stare will be looking at a whole city, so there will be no way for the adversary to know what we’re looking at, and we can see everything.”

If a car bomb were to detonate in an outdoor market, for example, the accumulated footage Gorgon Stare had captured from that day could be rewound to track the vehicle to its point of origin. Perhaps it could even follow the car backward in time, over several days. This could reveal not only the vehicle’s driver but also the buildings the car might have visited in the hours or days leading up to the attack. It is instant-replay technology applied to an entire metropolis instead of a football field—a comparison made unnervingly literal by the fact that the same company that supplied instant replays for the National Football League began consulting with the Pentagon to bring their technology to the battlefield.

Unsurprisingly, militarized replay technologies such as Gorgon Stare caught the eye of domestic U.S. law enforcement who saw it as an unprecedented opportunity to identify, track, and capture even the pettiest of criminals—or, more ominously, to follow every attendee of a political rally or public demonstration.

The larger promise of Gorgon Stare, however, was a narrative one: Its capacity for total documentation implied that every event in the city could not just be reconstructed but fully and completely explained. Indeed, James Joyce and the U.S. military would seem to agree that the best way to make sense of the modern metropolis is to document even the most inconsequential details. Urban events as minor as a Dubliner out for an afternoon stroll—let alone something as catastrophic as a terrorist attack—can be rewound, studied, and rationally annotated. Gorgon Stare is Ulysses reimagined as a police operation: a complete, time-coded, searchable archive of a person’s every act. The police can go back days, weeks, or months; if they have enough server space, years. Should they wish, they could produce the most complex, novelistic explanations imaginable simply because their data pool has become so rich.

This sort of persistent surveillance no longer requires drones, however, or even dedicated cameras; instead, people have willfully embedded these technologies into their daily lives. The rise of the so-called smart city is more accurately described as the rise of a loose group of multisensory tracking technologies. Gorgon Stare, we might say, is the metropolis now.

The ubiquitous installation of sensors, whether it’s for the audio surveillance of a child’s bedroom or for applying facial-recognition technology at an infrastructural scale, could be described as Joycean: That is, smart cities take the literary challenge of Ulysses and turn it into a technical goal. From the post office to the pub to the bedroom, something is recording nearly everything we do now. We are all Leopold Bloom. Smart TVs, Google Homes, even diagnostic medical devices have become surreptitious documentarians, compiling first-hand evidence of our everyday activities.

This is true to the unsettling extent that, in the summer of 2017, the FBI actually warned unsuspecting parents about the risk of internet-connected children’s toys. Although these frivolous objects appear to be nothing more than camera-enabled trucks or voice-activated dolls, they are, in fact, highly vulnerable to eavesdropping and remote surveillance. While the FBI’s warning focused on the possibility that pedophiles might try to contact a child through these toys, there are other risks. Savvy burglars could use these toys to case a target’s home, and all those handy microphones will present superb wiretapping opportunities for future law enforcement, once a viable precedent has been set for obtaining the necessary warrant.

If the very promise of the smart city is that the details of people’s lives will be captured at all scales and in every medium, then the technical ability of these sensors to record more and different types of data will, by necessity, only increase. In October 2017, for example, researchers at Mitsubishi revealed that they had successfully used machine learning “to pick a single voice out of a crowd,” allowing them to track a person against the background noise of a cocktail party—or a political demonstration. This ability might allow your smart speaker to recognize your voice requesting a song change even in the midst of a New Year’s bash, but it will also be a boon for law enforcement. Imagine the police hunt of the near future, for example, as a suspect risks having her voice picked up and identified by various combinations of strangers’ smartphones and Amazon Echo devices. Fleeing crime scenes in utter silence might be the strategic response.

Yet this fight to remain silent will not be enough: The smart city is more than just a city that watches and listens. City dwellers are constantly generating data about themselves, down to the vibrations of their footsteps. Consider a project called Big Glass Microphone, by the California-based design consultancy Stamen. Big Glass Microphone turned the fiber-optic telecommunications infrastructure embedded beneath Stanford University into a terrestrial eavesdropping tool. Able to pick up seismic disturbances created by delivery trucks, passing cyclists, and even the footsteps of lone pedestrians, the campus’s fiber-optic network became an underground tool for monitoring events on the surface. It is an invisible burglar alarm underfoot.

Intended as a benign revelation of the kinds of data everyday infrastructure is already capturing, Big Glass Microphone inadvertently suggests a new way for agents of political control to monitor the city. Activists might do everything in their power to avoid CCTV, to fool facial-recognition algorithms, even to thermally camouflage themselves to thwart night-vision cameras—but the seismic signatures produced while walking from activist apartment to secret meeting place will ultimately betray them. This gives a whole new meaning to the idea of following someone’s every footstep.

As the city becomes a forensic tool for recording its residents, an obvious question looms: How might people opt out of the smart city? What does privacy even mean, for example, when body temperature is now subject to capture at thermal screening stations, when whispered conversations can be isolated by audio algorithms, or even when the unique seismic imprint of a gait can reveal who has just entered a room? Does the modern city need a privacy bill of rights for shielding people, and their data, from ubiquitous capture?

The tension between Ulysses and Gorgon Stare, of course, is one of intention, of the interpretive goal that motivates these acts of mass data collection. Put another way, are these tools for novelists or tools for police, for authors or authoritarians? Every June 16—the day of the events depicted in Ulysses—Joyce’s novel is read aloud at events celebrating “Bloomsday,” as Leopold Bloom’s fictional day of wandering around Dublin has become known. But Bloomsday, in a sense, now never ends, and not just in Dublin: Urbanites everywhere are becoming infinitely tracked characters in a story someone else—something else—is writing, even as it is not yet clear what it means for their lives to be captured.