First, why were there so many requests for an FBI investigation at Kavanaugh-Ford hearing?

Because this was the ONLY way that the Democrat Deep State could postpone the confirmation vote.  They had to shut down the process anyway they could. 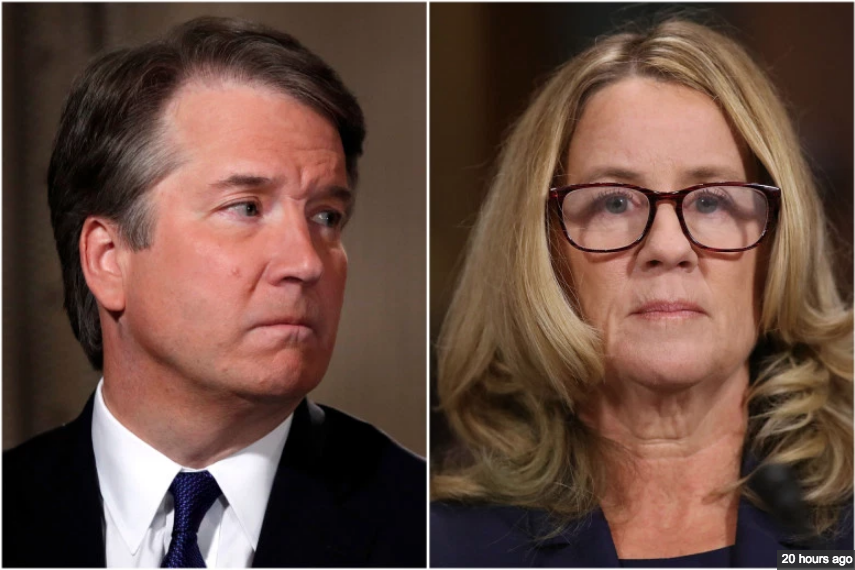 State of the Nation
There was no other way to push the vote well into the future than to initiate a full-blown FBI investigation into the allegations lodged by the CIA-affiliated accuser.

Christine Blasey Ford’s connections to the CIA are deep and irrefutable.

Christine Blasey Ford was used to press for this outcome by her Democrat handlers.  Her image was meticulously manicured to evoke sympathy in a way that worked for those who are easily deceived.  Her main mission: To present evidence so compelling that her allegations should be investigated by the FBI.
Brett Kavanaugh, on the other hand, was well coached to resist any calls for an FBI investigation.  He knows exactly why the DEMs were so relentless in their demands for one, just as he is aware of how weaponized the FBI has become in American politics.

Remember, the Federal Bureau of Investigation is a thoroughly and hopelessly corrupt and criminal law enforcement agency.
Who are the previous Directors of the FBI?

Public Enemy #1: Robert  Mueller
Public Enemy #2: James B. Comey
Both of these former directors are a reflection of just how profoundly corrupt the FBI truly is.  The institutional corruption is, in fact, so deep and broad that the higher-ups would most assuredly ensure that a Kavanaugh investigation would be distorted.
With this critical understanding, is it any wonder why the Democrat senators kept demanding an FBI investigation?
Not only will such a tainted investigation purposefully postpone the Kavanaugh confirmation process, once the totally incompetent, willfully negligent and utterly disgraceful FBI gets involved, you know the case will get irreversibly twisted into something else.
This is why Kavanaugh resolutely resisted asking for the FBI to conduct a formal investigation into the Ford allegation.  He has watched, as the whole nation has, the FBI’s shocking misconduct regarding the fake ‘Trump-Russia collusion’ investigation.  Why would he subject himself to the same.

KEY POINT: The very same Deep State operatives who have manipulated the fraudulent Mueller investigation are involved with the Kavanaugh character assassination plot.  How Christine Blasey Ford is related to Peter Strzok besides the established CIA connection (Video)

Given that Deep State completely controls the FBI, the Democrats on the Senate Judiciary Committee were extraordinarily determined to, once again, throw the process off by involving the FBI.  They know that they own the Bureau—lock, stock and barrel!  So they can manipulate it to do their bidding.
It’s quite predictable that even the American Bar Association is now calling for an FBI investigation. See: Why has the American Bar Association suddenly called for an FBI investigation?  The ABA has long been a central pillar of the Deep State’s legal apparatus. 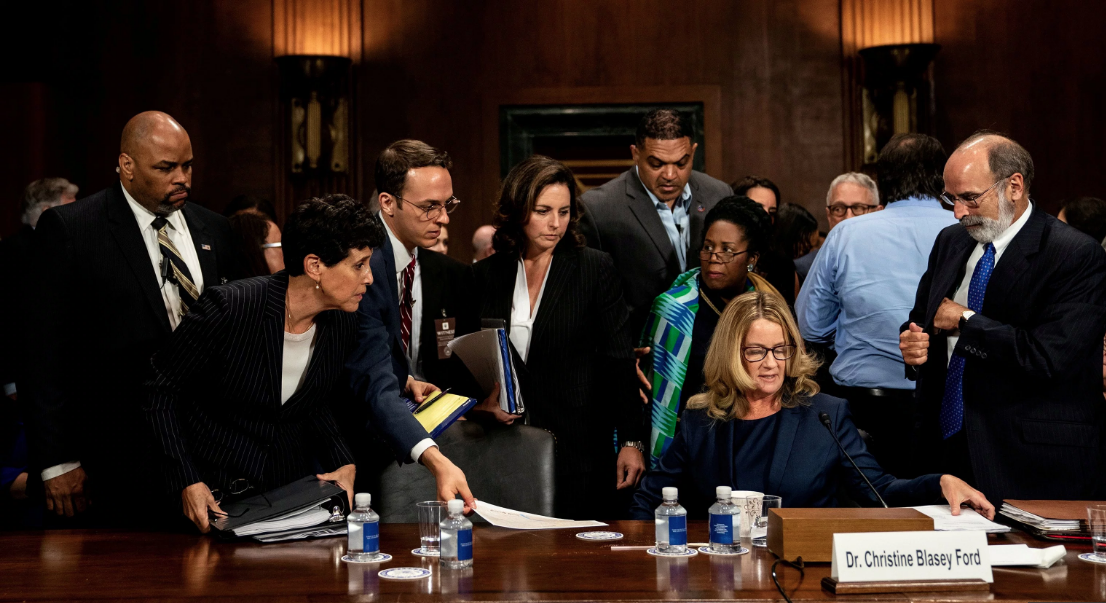 Just a few of the Democrat Deep State co-conspirators


Curious cross-examination by Democrats re: “a conspiracy”

Every viewer of yesterday’s hearing was also treated to several overtures made by the Democrat side to Kavanaugh to disavow any suggestion that Blasey Ford was playing a key part in a much greater conspiracy.

This line of inquiry, as well as the obvious level of concern, has never been revealed by any U.S. Congress.  The DEMs know that, with the radioactive testimony given by the extremely fragile Blasey Ford, it was becoming quickly apparent that hers was an integral piece of a massive conspiracy to deceive the American people. See: Bombshell Photo of Kavanaugh Accuser Says It All, Deep State’s Blaseygate Exposed as Seditious Black Op
She soon gave herself away by the bald-faced lie she told more than once about her extreme fear of flying.  Therefore, she opened the door for many, who saw the conspicuous falsehood, who would then entertain the notion: “If she will lie about flying, what else is she lying about?”

KEY POINT: Blasey Ford was forced to lie about flying because that was her only excuse for not flying to Washington in order to be formally questioned by the Senate Judiciary Committee’s attorneys.  Her handlers knew that she could not stand up to such an intense interrogation; hence, she outright lied about her non-existent fear of flying.

Back to the grave concern expressed by the DEMs about the very real conspiracy that was breaking out into the open — more and more — with each successive hour of the hearing. The DEMs were quite obviously given strict orders to bring closure to such a radioactive matter by their masters in Deep State.  Were there to be any exposure of the “highly coordinated, complex and convoluted scheme to destroy the reputation of a SCOTUS nominee”, which is a frequently utilized Democrat strategy, their MO would be neutralized forever. See: KAVANAUGH TAKEDOWN: Character Assassination Deep State Style via “Shock & Awe” 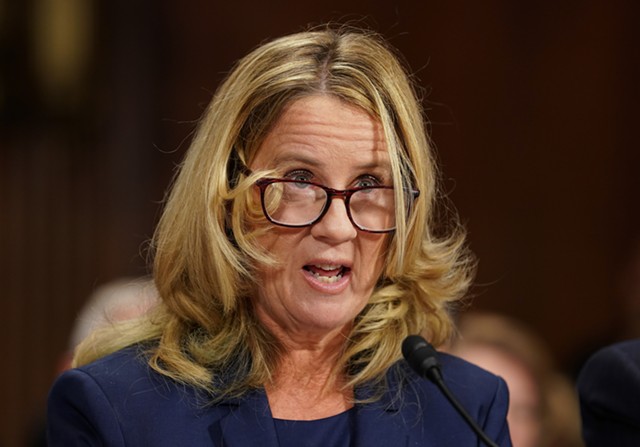 Christine Blasey Ford is by no means how she presented herself to be.  Not only did she flat-out lie to the Committee, her story yesterday was full of so many holes it resembled CIA-manufactured swiss cheese. See: Christine Blasey Ford’s testimony had LOTs of holes, She’s definitely NOT what she presented herself to be
Perhaps the most telling piece of the Blasey Ford’s narrative, is the one that nobody touched about her high school years.  That her yearbook was quickly scrubbed from the Internet by Google in anticipation of the justifiable scrutiny says it all. Bombshell Photo of Kavanaugh Accuser Says It All, Deep State’s Blaseygate Exposed as Seditious Black Op
It’s becoming clear that the Democrat Deep State (Fyi, there’s an equally powerful Republican Deep State) will not let go of this nomination until Kavanaugh is somehow prevented from ascending to the SCOTUS.
Hence, the American people can expect to see many more shenanigans from the Left.  The political bolsheviks on the ultra-liberal Left have proven that they will do ANYTHING to terminate the Kavanaugh candidacy.  For Sen. Lindsey Graham to react the way that he did yesterday reflects just how serious the stakes are with this SCOTUS nomination process.  EPIC SLAM: Graham lambastes the Democrats during Kavanaugh hearing (Video)
Even Geraldo Rivera said that what transpired yesterday in the U.S. Senate was bigger than Trump’s election.[1]  And that was not hyperbole! (“This Was Bigger Than President Trump’s Election” — Geraldo Rivera)
State of the Nation
September 28, 2018
Editor’s Note
State of the Nation has written extensively about Blaseygate–a term that SOTN memed because we saw it for the serious scandal it truly is.  Part of the series of article can be found at this link: BLASEYGATE: A Special Series on the Deep State Psyop
For those who are seeking the truth about this CIA-directed drama, the following excerpt says it all…on one level, of course.

Upon the memory and truthfulness of Christine Blasey Ford hangs the Supreme Court nomination of Judge Brett Kavanaugh, his reputation and possibly his career on the nation’s second-highest court.
And much more. If Kavanaugh is voted down or forced to withdraw, the Republican Party and conservative movement could lose their last best hope for recapturing the high court for constitutionalism.
No new nominee could be vetted and approved in six weeks. And the November election could bring in a Democratic Senate, an insuperable obstacle to the elevation of a new strict constructionist like Kavanaugh.
The stakes are thus historic and huge.
(Source: This is why the Democrats really did the late hit on Kavanaugh.)

On another level, there is the exceedingly divisive wedge issue known as abortion.  Herein lies the gravest threat to the cultural marxist agenda with regard to the Kavanaugh nomination.  As follows:

“When the American people begin to accept abortion so casually,
it will inevitably inure them to all the other social ills and cultural
sins.  In other words, by socially engineering the populace to
approve of a mother’s illicit right to outright kill her child, the
floodgates will be opened for so many other wicked acts.  People
everywhere will be gradually desensitized to accepting many
other vices as virtues.  The human capacity to discern between
right and wrong will be greatly undermined in the process.”
(ABORTION: The Most Powerful Weapon in the Arsenal of Cultural Marxism)

» Kavanaugh WILL BE CONFIRMED (Q) Despite Derailment/Smear PLOT (Yes, Plot!) - Bombshell Photo of Kavanaugh Accuser Says It All
» About Kavanaugh
»  CGI: The Ford Foundation and the CIA
» The Kavanaugh Effect: Here’s what happens NEXT (and why you should get ready)
» Grab the Popcorn! It's Time To Watch The Circus!