It’s 2019. Why Haven’t Humans Gone Back to the Moon Since the Apollo Missions?

The conditions that incubated Apollo just aren’t around anymore. 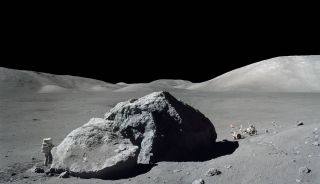 On Dec. 13, 1972, scientist-astronaut Harrison Schmitt is photographed standing next to a huge boulder during the final Apollo moon-landing mission, Apollo 17. This mosaic is made from two photos shot by fellow Apollo 17 moonwalker Eugene Cernan.
(Image:

In retrospect, Apollo 11 was even more exceptional than we thought.
NASA put two astronauts on the moon on July 20, 1969, just eight years after President John F. Kennedy announced the audacious goal and a mere 12 years after the dawn of the Space Age.
Five more crewed missions hit the gray dirt after Apollo 11, the last of them, Apollo 17, touching down in December 1972.

Humanity hasn’t been back to Earth’s nearest neighbor since (though many of our robotic probes have). NASA has mounted multiple crewed moon projects since Apollo, including the ambitious Constellation Program in the mid-2000s, but none of them have gone the distance.
So what was different about Apollo? It was incubated in a very particular environment, experts say — the Cold War space race with the Soviet Union.
“This was war by another means — it really was,” Roger Launius, who served as NASA’s chief historian from 1990 to 2002 and wrote the recently published book “Apollo’s Legacy” (Smithsonian Books, 2019), told Space.com. “And we have not had that since.”

The Soviet Union fired the first few salvos in this proxy war. The nation launched the first-ever satellite, Sputnik 1, in October 1957 and put the first person in space, Yuri Gagarin, in April 1961. These shows of technological might worried U.S. officials, who wanted a big win of their own. And they believed putting the first boots on the moon would do the trick.
This wasn’t viewed as empty flexing. The United States wanted, among other things, to show the world that the future lay with its political and economic systems, not those of its communist rival.
“The Apollo days were not, fundamentally, about going to the moon,” John Logsdon, a professor emeritus of political science and international affairs at The George Washington University’s Elliott School of International Affairs in Washington, D.C., told Space.com. “They were about demonstrating American global leadership in a zero-sum Cold War competition with the Soviet Union.”

So NASA got the resources it needed to pull off its moon shot. And those resources were immense — about $25.8 billion for Apollo from 1960 through 1973, or nearly $264 billion in today’s dollars. During the mid-1960s, NASA got about 4.5% of the federal budget — 10 times greater than its current share.
The stakes haven’t been nearly as high since the end of the Cold War, so subsequent moon projects haven’t enjoyed such sustained support. (They likely also suffered from some been-there-done-that sentiment.) For example, the Constellation Program, which took shape under President George W. Bush, was canceled in 2010 by President Barack Obama.
Obama directed NASA to instead send astronauts to a near-Earth asteroid. But President Donald Trump nixed that plan in 2017, putting the agency back on course for the moon.

NASA initially targeted 2028 for the first crewed lunar landing since the Apollo days. But this past March, Vice President Mike Pence instructed NASA to get it done by 2024.
The accelerated timeline might actually make this newest moon shot more achievable, NASA Administrator Jim Bridenstine has said, citing the “political risk” that doomed Constellation and other programs.

Political risk exists “because priorities change, budgets change, administrations change, Congresses change,” Bridenstine said May 14 in a town-hall address to NASA employees.
“So, how do we retire as much political risk as possible?” he added. “We accelerate the program. Basically, the shorter the program is, the less time it takes, the less political risk we endure. In other words, we can accomplish the end state.”
The 2024 landing is part of a program called Artemis, which aims to build up a long-term, sustainable human presence at and around the moon. The main goal is to lay the foundation for crewed trips to the ultimate human-spaceflight destination: Mars. NASA aims to put boots on the Red Planet sometime in the 2030s.