Today at 7:50 pm by PurpleSkyz

OUT OF MIND » PERCEPTUAL AWARENESS » THE SHIFT IN CONSCIOUSNESS » Thanksgiving: The Neuro Benefits of Practicing Gratitude 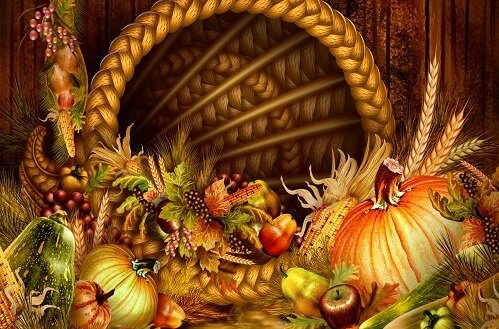 by Crystal Lauer
Health Impact News
Across the U.S., American families and friends will gather on the fourth Thursday of November to unwittingly flood their brains with dopamine and serotonin in a celebration of gratitude rooted in English traditions that date back to the Protestant Reformation.
However, the neuromodulating effects of being grateful can profoundly change your life for the better when practiced on the daily, rather than once a year over a wishbone and your Auntie May’s favorite stuffing.
While tradition is important in the human experience and a day set aside to give thanks and reflect on all our blessings is a noble occasion, practicing gratitude daily will lead to a happier, healthier you and even reshape your brain according to scientists, with the key being that you must really feel it for it to wield this powerful influence over your physiology and psychology.
Gratitude can act as a natural antidepressant by increasing the neurotransmitters, dopamine and serotonin, and sending them hurtling down existing neuropathways as well as forming new neural circuitry. This effect is particularly strong when we ask ourselves what we are grateful for and are mindful of it.
Choosing to practice gratitude has been shown in study after study to create new neurocircuitry through which dopamine can influence the reward center of the brain.
Much like the process of creating a physical path where there previously was none, the first time traveled might be difficult and feel unnatural.
However, once the path has been chosen and traversed repeatedly, it becomes familiar and better defined, until it is a well-worn and preferred pathway from one point to another.
Similarly, in the case of the brain, those neurons that fire together will create a new neuropathway and every future stimulation of these neurons will require less effort in order to “fire” them, as they are now considered “wired together.”
In scientific communities, this principle is known as Hebb’s Law, which states,

Our brains are literally wired to influence our bodies either negatively or positively through our thoughts, which in turn affects our overall well-being.
The medial pre-frontal cortex is the region where the two hemispheres of the brain meet. This area is associated with socialization and pleasure as well as being able to empathize, see others perspective, regulate emotion and modulate stress relief in the systems of the body.
In a 2015 research study out of the University of California, Los Angeles, researchers induced participants to feelings of gratitude through telling the stories of holocaust survivors who had been given life-saving gifts by strangers.
The test subjects were asked to put themselves fully into the experience of the survivor and imagine their own reactions and feelings of gratitude under the circumstances.
Functional magnetic resonance imaging was used to determine which parts of the brain were affected by the feelings of gratitude. The results showed activity in the medial pre-frontal cortex and the anterior cingulate cortex which gave researchers insight into how the brain’s circuitry is affected by moral cognition and the beneficence of others.
The study’s authors noted,

“the relationship between gratitude, pain, and empathy may provide important insight into the means by which gratitude is associated with improved health outcomes, benefits to relationships and subjective well-being.”

The fact that there is an association between the emotion of gratitude and physiological health has long been understood. Evidence correlates gratitude practices with improved physiological markers, such as better sleep quality, feelings of optimism and joy, less loneliness and feelings of isolation, relief of stress reactions and a reduction in pain, to name a few. Grateful people were also noted to be more helpful and generous to others as gratitude and generosity are symbiotic by nature.
In another study entitled, The effects of gratitude on neural activity, researchers recruited participants who were suffering from depression and and/or anxiety and were entering psychotherapy.
Participants were asked to write letters expressing gratitude, while the therapy-only control group did not write any letters.
After three months, participants were asked to perform a pay-it-forward task while in the functional magnetic resonance imaging machine, where researchers could measure brain activity during the task.
The outcome of the study showed a significant and lasting neural sensitivity to gratitude in those who wrote the “letters of gratitude,” which continued to affect the medial pre-frontal cortex of these participants even three months later.
It would seem that the intentional laying down of new neuro circuitry had become a preferred default pathway to reward, for the brain, resulting in increased gratitude-based behaviors.
The importance of being thankful or showing gratitude has been a rallying cry of grandparents all over the world whose goal was to convey good manners and civilized behavior in their offspring’s offspring. In this situation, once again, researchers and scientists are simply confirming and justifying every grandparent who has insisted that their progeny write thank you letters upon receiving a gift.
While your grandmother knew that gratitude is a virtue that blesses both the receiver and the giver, what she may not have been aware of, is the remarkable benefit to your brain that focusing on your thankfulness could provide.
In research undertaken to ascertain the effects of conscious gratitude on overall well-being, Robert A. Emmons Ph.D., a renowned gratitude researcher out of the University of Southern California, Davis and his colleague Mike Mc Cullough out of the University of Miami, gave participants journaling tasks which varied depending on the group.
One group was asked to focus on gratitude in their journaling exercise, another group relayed what hassled them in their journal entries and the final group simply recorded neutral events.
After ten weeks, the gratitude group showed significant increase in well-being over that of the comparison groups. Across multiple studies, with differing parameters, the results seemed to support the notion that counting your blessings may bestow a greater sense of interconnectivity with others, reduction in pain and more joy overall.
According to G.K Chesterton,

“When it comes to life the critical thing is whether you take things for granted or take them with gratitude.”

G.K. was definitely on to something, as was noted  in in research done on the role gratitude plays in the spiritual well-being of asymptomatic heart failure patients, undertaken by researchers out of the University of California, San Diego, Alex Wood out of University of Sterling and Deepak Chopra out of the University of California, San Diego and Chopra Center for Wellbeing located in Carlsbad, California.
The study looked at the association between spirituality and the wellbeing of the individual, with the sleep, mood, fatigue, cardiac-specific self-efficacy and inflammation of 186 men and women with asymptomatic heart failure being observed.
The researchers noted that gratitude and spirituality were related and influenced wellbeing, with gratitude mediating the beneficial effects of spirituality on the above points. They concluded that the increase of gratitude showed promise as a

“treatment for improving wellbeing in heart failure patients lives and (may) be of potential clinical value.”

The most published book in the world, the Bible, references thankfulness and gratitude persistently throughout it’s well-read pages. The Bible teaches that a heart that is centered in thankfulness is a heart at peace.
Philippians 4:6-7 says,

“Do not be anxious about anything, but in every situation, by prayer and petition, with thanksgiving, present your requests before God.  And the peace of God, which transcends all understanding, will guard your hearts and your minds in Christ Jesus.”

It is through gratitude that we acknowledge that all that we have is ultimately a gift of God. Psalm 9:1 says,

“I will give thanks to you, Lord, with all my heart, I will tell of all your wonderful deeds.”

Gratitude is defined as a deeply felt appreciation for something done or given to you by another individual or thing.
Researchers suggest that the strong ties in neural activity to the area of the brain, which deals with the relief of stress, seem to indicate that the more a stressor affects an individual, the higher the level of gratitude that will be felt when that stressor is alleviated by something or someone, particularly when the relief is unexpected or undeserved.
Feelings of gratitude flood the brain with dopamine, raise levels of serotonin and activate the hypothalamus, which is responsible for regulating many body functions including sleep quality, hunger, growth, body temperature, etc.
This process leaves the brain with the desire for more of these mood-lifting, pain-alleviating, depression-lifting, mind-calming sensations and the cycle of gratitude and generosity becomes self-perpetuating, but only when what is expressed is truly felt.
While your grandmother may accept a half-hearted “thank you” (though, I sort of doubt it), your brain cannot be fooled as easily.
Gratitude plays a large part in the connections we have to each other and our ability to both value others and be valued. Gratitude is a virtue that needs training and practice, so that our automatic response becomes one which allows us to feel that flood of neuropathway-creating chemicals in our brain as we meditate on those things that we are grateful for.
Philippians 4:8 reminds us to focus our minds constantly on what is good when it says,

This Thanksgiving as you laugh at jokes you’ve heard a thousand times (quite possibly from the same person), share dishes lovingly prepared by familiar hands and reflect on the blessings of your life, stop for a moment and ask yourself what all you have to be grateful for.
Each of us has things, though for some it may be painful and more difficult to access, due to less practice and less neuroplasticity.
This notwithstanding, the human experience endows us all with moments that make our tapestry richer and more brilliant if we will allow it to, so consider stopping amid the holiday chaos and really seeing what is around you, and who is around you and acknowledge your gratitude perhaps, by writing it down in either a journal or a letter.
This holiday be intentional in strengthening the connections around you, rather than tearing them down and give yourself and others, the gift of a more flexibly-optimistic brain as well as a healthier body and soul.

OUT OF MIND » PERCEPTUAL AWARENESS » THE SHIFT IN CONSCIOUSNESS » Thanksgiving: The Neuro Benefits of Practicing Gratitude