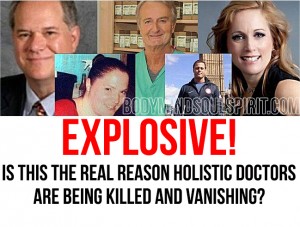 It is with a heavy heart that we announce the 101st doctor found dead in our unintentional holistic doctor death series.
Kootenai Valley Times, the local popular paper in the area where Dr. Brian Drake practiced, explains the following:
“At approximately 7:29 p.m. Thursday, March 12, officers of the Bonners Ferry Police Department, assisted by the Boundary County Sheriff’s office, responded to a call of shots-fired at 6811 Main street, Bonners Ferry (Idaho).
On arrival, officers discovered Kootenai County resident (Dr.) Brian Drake, 45, deceased as the result of a gunshot wound.” The local paper also states that the FBI is on the case.
It is very rare for the news to report the FBI being involved in any of the other 100 deaths we’ve reported on thus far.
This makes 101 in our series.
The local paper explains that the Boundary County Sheriff’s Office, Boundary County Prosecutor’s Office, Idaho State Police, the Kootenai County Sheriff’s Office and the FBI federal task force are all on the case as well. To date, this is the largest amount of agencies we’ve seen on a holistic doctor death.
The Kootenai Valley Times had the following to say on the case as well:
“A person of interest was detained and questioned. This person was later released, but remains under investigation.
Bonners Ferry Police Chief Brian Zimmerman assures city residents that, although this was a tragic loss of life, evidence thus far indicates this was an intentional act, not random in nature.
The BFPD asks those who may have any information that might assist in this investigation, contact your current on duty police officers by calling sheriff’s dispatch, (208) 267-3151, extension 0.”
Shawn Burke, whose Linkedin profile lists him as Owner/Admin Director of We Care, a safe place to heal, VA & Community Health & Wellness Center, wrote the following heart felt tribute on his Facebook page today:
“This last week our We Care family suffered a tragic loss. One of our practitioners, Dr. Brian Drake was murdered outside his office in Bonners Ferry.
This senseless tragedy took us all off guard. The loss is felt deeply and our grief for his wife and family is hard to express.
Brian was one of the founding practitioners here at We Care and was a key component in its development. His quiet demeanor and gentle manor was a cornerstone example of how we envisioned all of our practitioners to be.
He was loved and respected by everyone he worked with, all of his patients and everyone he came in contact with. His skill and professionalism were respected by all, but it was his warmth and ability to listen with such attention that endeared him to the staff and patients alike.
We know very little of the reason for Brian’s death as the police are still investigating. But what we do know is he was a great chiropractor, a good friend, a beloved husband and cherished father to children who are in unimaginable grief at this moment.
He was a part of the We Care family and we stand together in our loss, and grief and in providing what little comfort his family may find in our condolences. But we stand together still.
We will marshal forward helping people find a better and healthier life without interruption. Everyone who knew Brian knows it’s what he would want. He always put the patient’s care first. We will not let anything stand in the way of this legacy.
As we know more of any service arrangements or aid needed by his family we will keep you informed.
Rest In Peace our brother, you will be missed and never forgotten.
Shawn Burke
******
A GoFundMe page has been set up to help to help the Drake family during this difficult time. Our heart goes out to Shawn Burke and Dr. Drake’s family, friends, colleagues, patients and all that knew him.
Dr Mercola and I just arrived back in the country this morning, but since law enforcement has asked for help (with their number and information listed above) I wanted to get this information out as soon as possible.
In light of this and everything going on in the world right now, we ask that you give your loved ones a hug today and appreciate one another.
We hope that Dr Drake’s murder is solved as well as other unsolved homicides in our series of 101 doctors who have died which you can read by clicking here.
Stay safe.
Erin Elizabeth, East Coast of Florida,
Reference: Kootenai Valley Times