A new study by the Hubble Space Telescope has revealed a clearer picture than ever before of one of the most intriguing and most valuable asteroids we know of.
It’s also one that NASA is planning to visit in 2026.
Here’s everything you need to know about “16 Psyche.”

About 230 million miles/370 million kilometers from Earth, Psyche—as it’s commonly known—is one of the most massive objects in the Solar System’s main asteroid belt orbiting between Mars and Jupiter.
It’s about 140 miles/226 kilometers-wide and—unlike most asteroids, which are rocky or icy—Psyche appears to be metallic.
In fact, it’s so dense and metallic that Psyche is thought to be the leftover core of a planet that failed during its formation—a “protoplanet.”

“We’ve seen meteorites that are mostly metal, but Psyche could be unique in that it might be an asteroid that is totally made of iron and nickel,” said Dr. Tracy Becker, a planetary scientist at the Southwest Research Institute in in San Antonio, Texas, and author of the new paper published in the Planetary Science Journal this week.
Iron and nickel are often found in metallic meteorites and in the dense metal cores of planets. “Earth has a metal core, a mantle and crust,” said Becker.
Psyche is truly a one-of-a-kind object in the Solar System.

Some think that the metals that comprise Psyche could make be worth about $10,000 quadrillion. The global economy was worth about $142 trillion in 2019.

“It’s possible that as a Psyche protoplanet was forming, it was struck by an-other object in our solar system and lost its mantle and crust,” said Becker.

‘16 Psyche’ was studied in the infrared by the Hubble Space Telescope. GETTY

‘16 Psyche’ and the Hubble Space Telescope

Becker’s study had the Hubble Space Telescope observe the asteroid at two specific points in its rotation to view both sides of Psyche. It also viewed the asteroid in ultraviolet wavelengths of light to get as much detail as possible of its surface. “We were able to identify for the first time on any asteroid what we think are iron oxide ultraviolet absorption bands,” said Becker. “This is an indication that oxidation is happening on the asteroid, which could be a result of the solar wind hitting the surface.”

Report this ad
The solar wind is a stream of charged particles from the Sun’s hotter outer atmosphere called its corona. Often called “space weather,” it’s also what causes aurora at Earth and could, at Psyche have caused excessive “space weathering.”

A surface of pure iron?

Becker saw that the asteroid’s surface could be mostly pure iron, though noted that the presence of even a small amount of iron could dominate ultraviolet observations, and in practice it could just be that 10% of the surface is actual iron.
However, while observing Psyche, the asteroid appeared increasingly reflective at deeper UV wavelengths. “This is something that we need to study further,” said Becker. “This could be indicative of it being exposed in space for so long. This type of UV brightening is often attributed to space weathering.”
However, what Becker’s paper makes very clear is that while it’s tricky to quantify the amount of iron that may be present on the surface of Psyche, it’s a unique object so scientists cannot compare it with anything else. 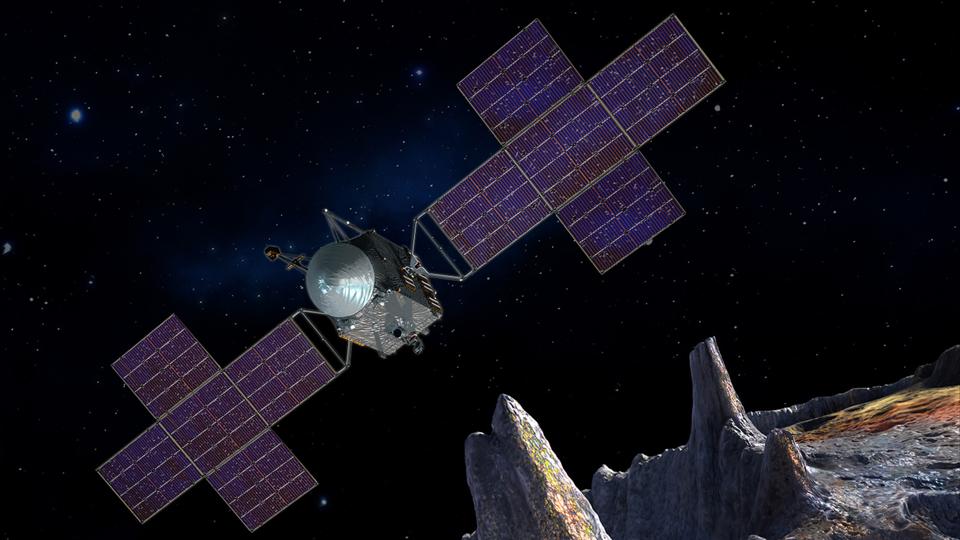 NASA and SpaceX’s mission to 16 Psyche

The only way we’ll ever get to see a close-up of what the core of a planet is really like is to pay a visit to Psyche. That’s exactly what NASA is planning to do.
Due to launch in August 2022 from Florida’s Kennedy Space Center atop a SpaceX Falcon Heavy rocket, NASA’s Psyche mission is part of its Discovery Program of low-cost robotic space missions.
The orbiter is due to arrive at Psyche in January 2026 to begin at least 21 months in orbit mapping and studying the asteroid’s properties.
“To understand what really makes up a planet and to potentially see the inside of a planet is fascinating,” said Becker, who describes Psyche and other asteroids as the building blocks of the Solar System. “Once we get to Psyche, we’re really going to understand if that’s the case, even if it doesn’t turn out as we expect … any time there’s a surprise, it’s always exciting.”
Wishing you clear skies and wide eyes.