Nobody had ever seen these bright, transient luminous events dancing across alien skies – until now. 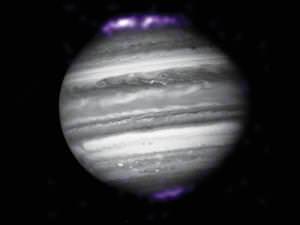 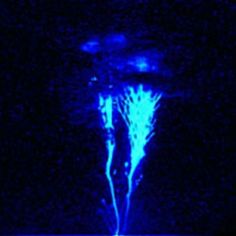 New high-definition imagery captured of Jupiter by NASA’s Juno spacecraft is revealing colorful, lighting-like bursts of energy in the upper atmosphere of our solar system’s largest planet.
The phenomena – haunting, jellyfish-like spurts of red lightning dubbed “sprites” and glowing disks known as “elves” – are common occurrences in the upper reaches of the Earth’s atmospheres during thunderstorms, and were first discovered in 1989. Since then, they have been sighted over every continent besides Antarctica.
Scientists have theorized that any planet that has lightning would also produce these super-fast electrical bursts that occur up to 60 miles up in the Earth’s sky, reaching toward space. Researchers predicted that this would certainly be the case in Jupiter’s massive, roiling atmosphere.
However, nobody had ever seen these bright, transient luminous events dancing across alien skies – until now.


Since 2016, Juno has orbited Jupiter and collected troves of images of its aurorae through the spacecraft’s ultraviolet light, or ultraviolet spectrograph instrument (UVS). When scientists began processing some of these images, they noticed an unexpected detail: bright, narrow streaks of ultraviolet emissions that appeared in a flash before quickly vanishing.
“In the process of putting together those images, we noticed that very occasionally we saw these surprising, short-lived, bright flashes,” said Juno scientist Rohini Giles during a Tuesday press conference at the annual meeting of the American Astronomical Society’s Division for Planetary Sciences, according to Business Insider.
“We then went and searched through all of the data that we’ve taken over four years of the mission and we found a total of 11 flashes all with very similar properties,” she added. The outbursts only lasted mere milliseconds.
On Tuesday, her team published a new study on these phenomena in the Journal of Geophysical Research: Planets.


Here on Earth, sprites often resemble alienlike jellyfish-style creatures dangling from the ionosphere, or the layer that lies just above the dense lower atmosphere. In other cases, they look like vertical pillars of light with thin, curling tendrils – and these are called carrot curls due to their resemblance to the root vegetable.
Sprites were given their quasi-magical name by late University of Alaska physics professor Davis Sentman, who devised the name for this weather phenomenon due to it being “well suited to describe their appearance” and fleeting, fairy-like nature – much like the mischievous characters from English folklore.
Sprites occur when lightning strikes the ground, releasing positive electrical energy that requires balancing by an equal and oppositely charged electrical discharge into the sky. The sprites also occur much higher into the sky than regular lightning, which strikes in between electrically charged air, clouds, and our planet’s surface.
In some cases, lightning strikes also send electromagnetic pulses upward, producing glowing disks known as elves.

“On Earth, sprites and elves appear reddish in color due to their interaction with nitrogen in the upper atmosphere,” Giles noted. “But on Jupiter, the upper atmosphere mostly consists of hydrogen, so they would likely appear either blue or pink.”
The Juno team is still unable to confirm whether the events were actually caused by lightning strikes, mainly because the probe’s device that detects lightning is on the opposite side of the spacecraft from its UVS. The images from the two devices are also taken 10 seconds apart, which is far too long a period of time for both instruments to analyze the same flash of light.
However, the researchers are confident that the 11 outbursts detected were transient luminous events. In each case, they disappeared in a flash, emitted massive amounts of hydrogen, and took place 186 miles above Jupiter’s water clouds – far too high to be simple lightning.
“We’re continuing to look for more telltale signs of elves and sprites every time Juno does a science pass,” Giles said.
“Now that we know what we are looking for, it will be easier to find them at Jupiter and on other planets,” she added. “And comparing sprites and elves from Jupiter with those here on Earth will help us better understand electrical activity in planetary atmospheres.”