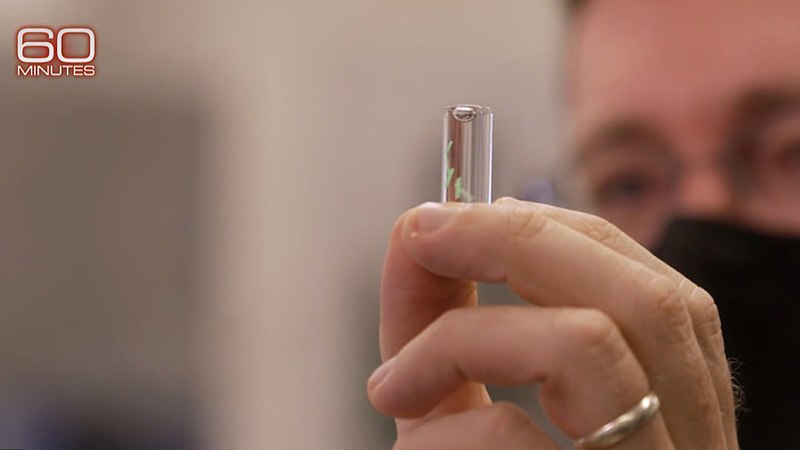 by Steve Watson
Summit News
The Pentagon’s Defense Advanced Research Projects Agency (DARPA) is working on a COVID vaccine that will work on all variants and has developed an implantable microchip that it says will continuously monitor the human body for signs of the virus.
Retired Colonel Matt Hepburn, an army infectious disease physician heading up DARPA’s response to the pandemic, appeared on 60 Minutes to demonstrate the technology.
Holding up a vial of green tissue-like gel, which contains the chip, Hepburn proclaimed:

“You put it underneath your skin and what that tells you is that there are chemical reactions going on inside the body, and that signal means you are going to have symptoms tomorrow.”
“It’s like a ‘check engine’ light,” Hepburn added, noting that those with the chip “would get the signal, then self-administer a blood draw and test themselves on site.”
“We can have that information in three to five minutes,” Hepburn continued, adding “As you truncate that time, as you diagnose and treat, what you do is you stop the infection in its tracks.”

Hepburn also declared that DARPA has developed a filter to remove the virus from the blood via a dialysis machine, and that the FDA has approved it, and it has already been used on 300 patients.
The 60 Minutes report also highlights how the pentagon has hundreds of tissue samples from soldiers and sailors infected with pathogens all over the world, including the 1918 Spanish Flu which killed millions globally.
Pentagon scientist Dr Kayvon Modjarrad also highlighted that the military is developing a one size fits all vaccine for COVID, commenting “This is not science fiction, this is science fact.”
“We have the tools, we have the technology, to do this all right now,” he said explaining that the goal is to inoculate people against potentially deadly viruses that have not even appeared yet.
“Killer viruses that we haven’t seen or even imagined, we’ll be protected against,” Modjarrad declared.
It was recently revealed that a third of active duty service members opted out of taking the COVID vaccine, with sources claiming the actual figure is probably closer to half.
The finding prompted the likes of TIME to declare that ‘vaccine hesitancy’ is threatening national security, and that while “These troops may not be co-opted by domestic terrorists, but they are clearly influenced by conspiracy theorists online and they just don’t trust basic science.”
The DARPA announcement of implantable microchip technology tied to the virus and a vaccine will likely only serve to enforce concerns the media continually describes as ‘conspiracy theories.’
Read the full article at Summit News.
Comment on this article at HealthImpactNews.com.
https://vaccineimpact.com/2021/military-unveils-next-stage-of-covid-vaccines-on-60-minutes-implantable-microchips/
Thanks to: https://vaccineimpact.com

Re: Military Unveils Next Stage of COVID Vaccines on 60 Minutes: Implantable Microchips Tue Apr 13, 2021 9:33 am

Always the Plan: DARPA Reveals They Are Working on a Human Implantable Biometric Microchip to Fight Against the COVID Virus

by Geoffrey Grider
Today we will open the prophetic pages of our King James Bibles, read it, believe it, and then give you the news updates. Someone is lying to you about the vaccine and the microchip, and guess what, it’s not us.

The Daily Mail UK reports that “Pentagon scientists working inside a secretive unit set up at the height of the Cold War, DARPA, have created a microchip to be inserted under the skin, which will detect COVID-19 infection, and a revolutionary filter that can remove the virus from the blood when attached to a dialysis machine.”
We will take our apology now from all those people who said what we told you last year about a microchip combined with the vaccine was ‘conspiracy theory’ and ‘baseless fear mongering’.
Actually, it was the gospel truth!
“And he causeth all, both small and great, rich and poor, free and bond, to receive a mark in their right hand, or in their foreheads: And that no man might buy or sell, save he that had the mark, or the name of the beast, or the number of his name. Here is wisdom. Let him that hath understanding count the number of the beast: for it is the number of a man; and his number is Six hundred threescore and six.” Revelation 13:16-18 (KJB)
On this episode of the NTEB Prophecy News Podcast, we are once again warning you that the COVID vaccine. while not yet the Mark of the Beast, absolutely leads you to the Mark of the Beast in its final form.
As you read this, I am currently suspended on Facebook for making “false and misleading” about the COVID vaccine, but the truth is I am telling you exactly what the plan to chip every human on earth is all about.
Bill Gates promised this would happen, he and the other tech titan demons are spending billions to bring it to pass, it is happening before your very eyes! Today we will open the pages of our King James Bibles, read it, believe it, and then give you the news updates.
Someone is lying to you about the vaccine, and guess what, it’s not us. It makes no difference to me that we won’t be here during the great Tribulation, I am refusing the vaccine right here and right now on general, and biblical, principle.