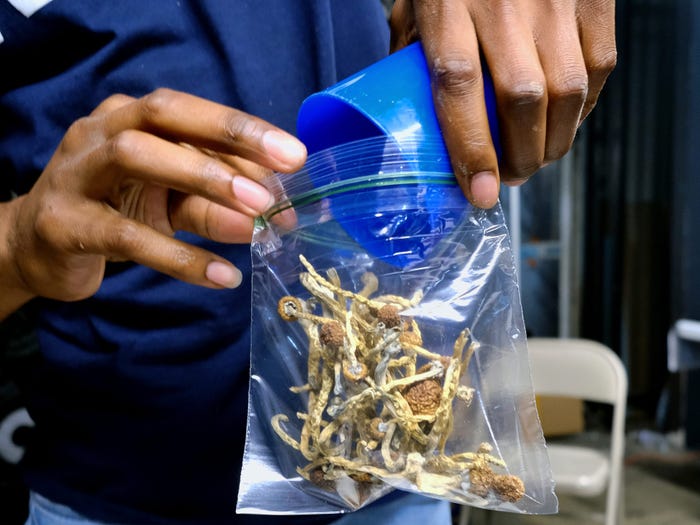 
In a small phase two trial, Imperial College researchers have found that psilocybin, the active ingredient of magic mushrooms, is at least as effective as pharmaceutical medication at treating depression.
In their admittedly small scale study, some 59 volunteers with depression were split into two groups.
One group was given a daily dosage of the widely used antidepressant escitalopram (AKA Lexapro, Cipralex, and others). They were also administered very weak doses of psilocybin twice, three weeks apart, over the course of the study.
The second group received much stronger doses of psilocybin, with a placebo instead of antidepressant medication.
After six weeks, the self-reported results from the patients suggested the psilocybin was just as effective as the pharmaceutical, and in many cases showed a slightly bigger – but ultimately statistically insignificant – improvement in symptoms.
The research team, led by Imperial College London neuroscientist Robin Carhart‑Harris, also highlighted the limited timeframe of the study as playing an important factor in the results, and suggested that a longer study might yield different results, possibly favouring pharmaceutical intervention.
The scientists were also quick to highlight the importance of guided psychotherapy to manage any hallucinatory experiences among the trial volunteers, lest members of the public attempt to self-medicate.
“We strongly believe that the … psychotherapy component is as important as the drug action,” Carhart-Harris said.
“With a psychedelic it is more about a release of thought and feeling that, when guided with psychotherapy, produces positive outcomes.”
Some five patients taking the SSRI stopped or reduced their doses due to negative effects, but none in the psilocybin group did. Furthermore, volunteers with a family history of psychosis were excluded from the trial, which may have tipped the results positively in favour of the psychedelic intervention.
Previous research has found that psilocybin treatment had fewer side effects and had an almost immediate impact compared with common antidepressant medication, such as selective serotonin reuptake inhibitors (SSRIs).
SSRIs are often perceived to blunt emotional response, whereas the psilocybin had the opposite effect, according to fMRI scans which showed an apparent increase in emotional connections within the patients’ brains.
There are often a slew of side effects associated with SSRIs, ranging from lethargy and mood swings to so-called ‘brain zaps’, or the sensation of electrical shocks in the brain associated with the use (or discontinuation) of the medication.
SSRIs also typically have a lead time of up to six weeks to reach full effect, while ongoing side effects which can persist beyond this initial phase include insomnia, weight gain, and persistent fatigue, among others.
Further, the efficacy of such antidepressants can wane for some patients over time, so breakthroughs in the field of psychedelic treatments may provide huge relief for patients with adverse reactions to the more common interventions – though it is still too early to make any sweeping assertions about psilocybin treatments among the wider populace.
Still, with an estimated 800 million people with mental health disorders worldwide, new treatment options could soon be available.