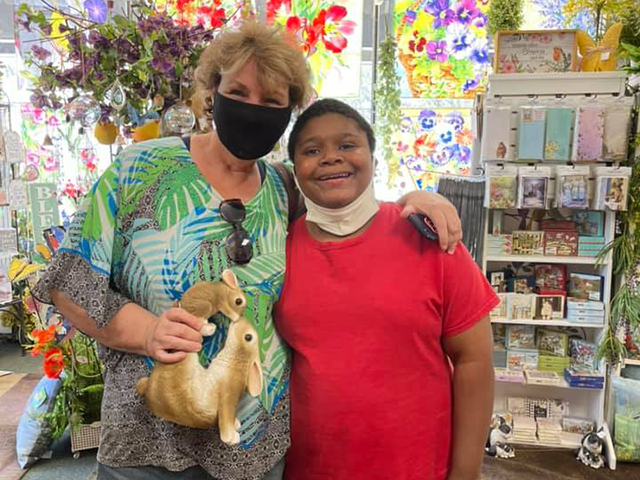 A business owner named Deborah Keeling in Lynchburg, Virginia, made a special friend the moment a boy walked into her shop and asked her a question.
“I’ll never forget, the first thing he asked was if I’m a Christian,” Keeling recalled, according to WSLS.


The 11-year-old named Jamarius Burneson wanted to buy something for his mom’s gravesite, not just because it was her, but “because Jesus wants me to go, so I follow that,” said the boy whose biological mom, Alfreda, passed away in 2019 following her battle with diabetes.
Although his adoptive mother, Pattie Burneson, said Jamarius has autism and was also diagnosed with PTSD, he lives every day to the fullest.
POSITIVE BREITBART STORIES
DIRECTLY IN YOUR INBOX


“Jamarius touches people everywhere we go. He’s just a beautiful child. He has an amazing heart and considering what he’s been through in his life, he’s coming through really well,” she noted.
When Keeling, who owns ACCENTS Flags, Gifts, Home & Garden, learned a small nameplate was the only marker on the young man’s mother’s resting place and there was no gravestone, it got her thinking.
“I didn’t say anything, but thought to myself, ‘I’m going to see to it that that’s done, that a real marker is going to be put there,'” she said.
In a Facebook post on Tuesday, Keeling announced she was working to buy a grave marker for the site and numerous people responded by dropping off checks and money.
“Our longtime friends and customers at Baer & Sons Memorials are working with me on this endeavor. I have decided to purchase the stone as an act of love from a conviction from God for Jamarius,” the post continued.
Jamarius said the stone will read, “I love you, Mom, and I will see you in Heaven.”
According to WSLS, Keeling is paying around $500 for the stone as a gift to her friend and has received almost $500 in donations that will go toward the boy’s future.
Those who wish to donate may do so through Venmo at 434-258-9243 or leave a gift at the store located at 1716 Main St., Lynchburg, VA, 24504.